C# : Out of Memory exception

Today my application today threw an OutOfMemoryException. To me this was always almost impossible since I have 4GB RAM and a lot of virtual memory too. The error happened when I tried to add an existing collection to a new list.

To my understanding there isn't much memory allocated here since the vehicles my new list should contain already exist inside the memory. I have to admit Vehicle is a very complex class and I tried to add about 50.000 items to the new list at once. But since all Vehicles in the application come from a database that is only 200MB in size: I have no idea what may cause an OutOfMemoryException at this point.

3 years old topic, but I found another working solution. If you're sure you have enough free memory, running 64 bit OS and still getting exceptions, go to Project properties -> Build tab and be sure to set x64 as a Platform target. 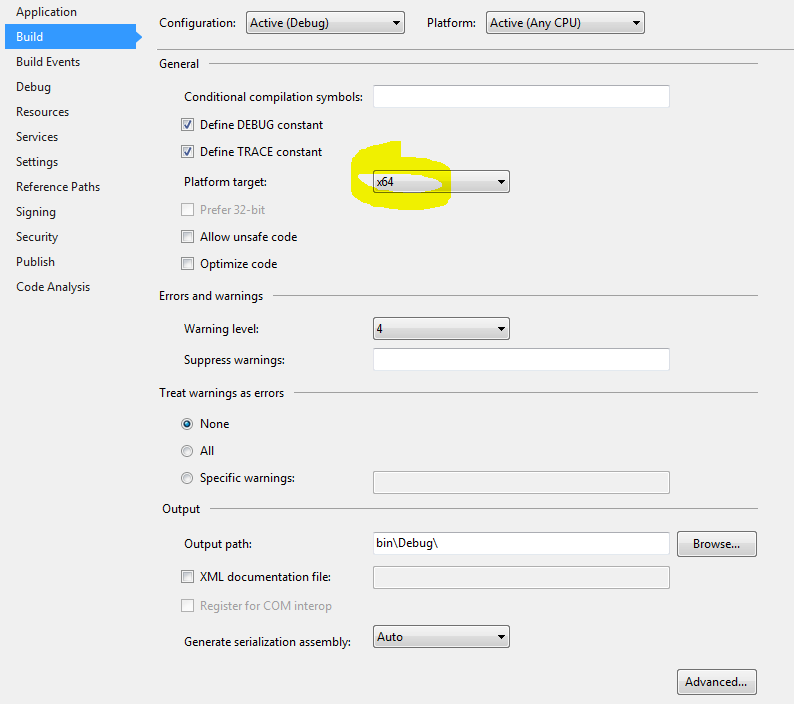 .Net4.5 does not have a 2GB limitation for objects any more. Add this lines to App.config

Please note it will work only on x64 OS's!

Data stored in database compared to memory in your application is very different.

There isn't a way to get the exact size of your object but you could do this:

After a certain amount of objects have been loaded and see how much your memory is changing as you load the list.

If it is the list that is causing the excessive memory usage then we can look at ways to minimize it. Such as why do you want 50,000 objects loaded into memory all at once in the first place. Wouldn't it be best to call the DB as you require them?

If you take a look here: http://www.dotnetperls.com/array-memory you will also see that objects in .NET are greater than their actual data. A generic list is even more of a memory hog than an array. If you have a generic list inside your object then it will grow even faster.

OutOfMemoryException (on 32-bit machines) is just as often about Fragmentation as actual hard limits on memory - you'll find lots about this, but here's my first google hit briefly discussing it: http://blogs.msdn.com/b/joshwil/archive/2005/08/10/450202.aspx. (@Anthony Pegram is referring to the same problem in his comment above).

That said, there is one other possibility that comes to mind for your code above: As you're using the "IEnumerable" constructor to the List, you may not giving the object any hints as to the size of the collection you're passing to the List constructor. If the object you are passing is is not a collection (does not implement the ICollection interface), then behind-the-scenes the List implementation is going to need to grow several (or many) times, each time leaving behind a too-small array that needs to be garbage collected. The garbage collector probably won't get to those discarded arrays fast enough, and you'll get your error.

The simplest fix for this would be to use the List(int capacity) constructor to tell the framework what backing array size to allocate (even if you're estimating and just guessing "50000" for example), and then use the AddRange(IEnumerable collection) method to actually populate your list.

All the other comments and answers still apply in terms of overall design decisions - but this might be a quick fix.

Note (as @Alex commented below), this is only an issue if selectedVehicles is not an ICollection.

My Development Team resolved this situation:

We added the following Post-Build script into the .exe project and compiled again, setting the target to x86 and increasing by 1.5 gb and also x64 Platform target increasing memory using 3.2 gb. Our application is 32 bit.

As .Net progresses, so does their ability to add new 32-bit configurations that trips everyone up it seems.

I know this is an old question but since none of the answers mentioned the large object heap, this might be of use to others who find this question ...

So what can you do about it?

If you are using a .net version prior to 4.5.1 then about all you can do about it is to be aware of the problem and try to avoid it. So, in this instance, instead of having a list of vehicles you could have a list of lists of vehicles, provided no list ever had more than about 18,000 elements in it. That can lead to some ugly code, but it is viable work around.

If you are using .net 4.5.1 or later then the behaviour of the garbage collector has changed subtly. If you add the following line where you are about to make large memory allocations:

it will force the garbage collector to compact the large object heap - next time only.

It might not be the best solution but the following has worked for me:

of course this only helps if you have the physical (or virtual) memory available.

While the GC compacts the small object heap as part of an optimization strategy to eliminate memory holes, the GC never compacts the large object heap for performance reasons**(the cost of compaction is too high for large objects (greater than 85KB in size))**. Hence if you are running a program that uses many large objects in an x86 system, you might encounter OutOfMemory exceptions. If you are running that program in an x64 system, you might have a fragmented heap.

Not the answer you're looking for? Browse other questions tagged c# out-of-memory or ask your own question.

1552
Calculate relative time in C#
6744
What is the difference between String and string in C#?
1577
Calling the base constructor in C#
1984
What is the best way to give a C# auto-property an initial value?
2231
Catch multiple exceptions at once?
2620
What are the correct version numbers for C#?
2235
How do I get a consistent byte representation of strings in C# without manually specifying an encoding?
1322
Strange out of memory issue while loading an image to a Bitmap object
1923
Get int value from enum in C#