Let's say I have a data structure like the following:

Without screen clipping or much of anything else, how would I calculate the screen x,y position of some point given some 3d point in space. I want to project that 3d point onto the 2d screen.

ScreenData.x and y is the screen x position of the 3d point in space. How do I calculate those values?

The 'way it's done' is to use homogenous transformations and coordinates. You take a point in space and:

This gets pretty vague, but I'll try and cover the important bits and leave some of it to you. I assume you understand the basics of matrix math :).

In 3D, a homogenous point would be a column matrix of the form [x, y, z, 1]. The final component is 'w', a scaling factor, which for vectors is 0: this has the effect that you can't translate vectors, which is mathematically correct. We won't go there, we're talking points.

Homogenous transformations are 4x4 matrices, used because they allow translation to be represented as a matrix multiplication, rather than an addition, which is nice and quick for your videocard. Also convenient because we can represent successive transformations by multiplying them together. We apply transformations to points by performing transformation * point.

There are 3 primary homogeneous transformations:

There are others, notably the 'look at' transformation, which are worth exploring. However, I just wanted to give a brief list and a few links. Successive application of moving, scaling and rotating applied to points is collectively the model transformation matrix, and places them in the scene, relative to the camera. It's important to realise what we're doing is akin to moving objects around the camera, not the other way around.

To transform from world coordinates into screen coordinates, you would first use a projection matrix, which commonly, come in two flavors:

An orthographic projection matrix is constructed as follows:

I think that's pretty simple. What you establish is an area of space that is going to appear on the screen, which you can clip against. It's simple here, because the area of space visible is a rectangle. Clipping in perspective is more complicated because the area which appears on screen or the viewing volume, is a frustrum.

If you're having a hard time with the wikipedia on perspective projection, Here's the code to build a suitable matrix, courtesy of geeks3D

and the matrix generated is column major, indexed as follows in the above code:

Both of these transformations require another matrix matrix to put things in screen coordinates, called the viewport transformation. That's described here, I won't cover it (it's dead simple).

Thus, for a point p, we would:

I hope that covers most of it. There are holes in the above and it's vague in places, post any questions below. This subject is usually worthy of a whole chapter in a textbook, I've done my best to distill the process, hopefully to your advantage!

I linked to this above, but I strongly suggest you read this, and download the binary. It's an excellent tool to further your understanding of theses transformations and how it gets points on the screen:

@BerlinBrown just as a general comment, you ought not to store your camera rotation as X,Y,Z angles, as this can lead to an ambiguity.

For instance, x=60degrees is the same as -300 degrees. When using x,y and z the number of ambiguous possibilities are very high.

Instead, try using two points in 3D space, x1,y1,z1 for camera location and x2,y2,z2 for camera "target". The angles can be backward computed to/from the location/target but in my opinion this is not recommended. Using a camera location/target allows you to construct a "LookAt" vector which is a unit vector in the direction of the camera (v'). From this you can also construct a LookAt matrix which is a 4x4 matrix used to project objects in 3D space to pixels in 2D space.

Please see this related question, where I discuss how to compute a vector R, which is in the plane orthogonal to the camera.

This will give you a vector that looks like this. 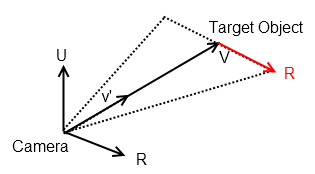 This could be of use for your question, as once you have the LookAt Vector v', the orthogonal vector R you can start to project from the point in 3D space onto the camera's plane.

Basically all these 3D manipulation problems boil down to transforming a point in world space to local space, where the local x,y,z axes are in orientation with the camera. Does that make sense? So if you have a point, Q=x,y,z and you know R and v' (camera axes) then you can project it to the "screen" using simple vector manipulations. The angles involved can be found out using the dot product operator on Vectors. 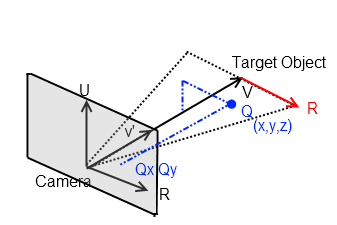 In order to do this, build up those matrices in your code. The mappings from your examples to their variables:

Or, just do the equations separately without using matrices, your choice:

In this case ex and ey are the viewer's position, I believe in most graphics systems half the screen size (0.5) is used to make (0, 0) the center of the screen by default, but you could use any value (play around). ez is where the field of view comes into play. That's the one thing you were missing. Choose a fov angle and calculate ez as:

Finally, to get bx and by to actual pixels, you have to scale by a factor related to the screen size. For example, if b maps from (0, 0) to (1, 1) you could just scale x by 1920 and y by 1080 for a 1920 x 1080 display. That way any screen size will show the same thing. There are of course many other factors involved in an actual 3D graphics system but this is the basic version.

Converting points in 3D-space into a 2D point on a screen is simply made by using a matrix. Use a matrix to calculate the screen position of your point, this saves you a lot of work.

When working with cameras you should consider using a look-at-matrix and multiply the look at matrix with your projection matrix.

Assuming the camera is at (0, 0, 0) and pointed straight ahead, the equations would be:

where "constant" is some positive value. Setting it to the screen width in pixels usually gives good results. If you set it higher then the scene will look more "zoomed-in", and vice-versa.

If you want the camera to be at a different position or angle, then you will need to move and rotate the scene so that the camera is at (0, 0, 0) and pointed straight ahead, and then you can use the equations above.

You are basically computing the point of intersection between a line that goes through the camera and the 3D point, and a vertical plane that is floating a little bit in front of the camera.

You might be interested in just seeing how GLUT does it behind the scenes. All of these methods have similar documentation that shows the math that goes into them.

The three first lectures from UCSD might be very helful, and contain several illustrations on this topic, which as far as I can see is what you are really after.

Run it thru a ray tracer:

Ray Tracer in C# - Some of the objects he has will look familiar to you ;-)

And just for kicks a LINQ version.

I'm not sure what the greater purpose of your app is (you should tell us, it might spark better ideas), but while it is clear that projection and ray tracing are different problem sets, they have a ton of overlap.

If your app is just trying to draw the entire scene, this would be great.

Solving problem #1: Obscured points won't be projected.
Solution: Though I didn't see anything about opacity or transparency on the blog page, you could probably add these properties and code to process one ray that bounced off (as normal) and one that continued on (for the 'transparency').

Solving problem #2: Projecting a single pixel will require a costly full-image tracing of all pixels.
Obviously if you just want to draw the objects, use the ray tracer for what it's for! But if you want to look up thousands of pixels in the image, from random parts of random objects (why?), doing a full ray-trace for each request would be a huge performance dog.

Fortunately, with more tweaking of his code, you might be able to do one ray-tracing up front (with transparancy), and cache the results until the objects change.

If you're not familiar to ray tracing, read the blog entry - I think it explains how things really work backwards from each 2D pixel, to the objects, then the lights, which determines the pixel value.

You can add code so as intersections with objects are made, you are building lists indexed by intersected points of the objects, with the item being the current 2d pixel being traced.

Then when you want to project a point, go to that object's list, find the nearest point to the one you want to project, and look up the 2d pixel you care about. The math would be far more minimal than the equations in your articles. Unfortunately, using for example a dictionary of your object+point structure mapping to 2d pixels, I am not sure how to find the closest point on an object without running through the entire list of mapped points. Although that wouldn't be the slowest thing in the world and you could probably figure it out, I just don't have the time to think about it. Anyone?

"Also, I don't understand in the wiki entry what is the viewer's position vers the camera position" ... I'm 99% sure this is the same thing.

You could try to just calculate the matrices and do the multiplication in software.

Not the answer you're looking for? Browse other questions tagged c# java math 3d projection or ask your own question.

46
Calculating a LookAt matrix
9
Projection- Transforming 3d to 2d
1
3d to 2d point conversion
2
WPF3D How to manipulate objects in a plane parallel to the camera
2
Converting XYZ to XY (world coords to screen coords)
4
3D space: following the direction that an object is pointing towards, using the mouse pointer
4
Convert 3D -> 2D Coordinate
-1
Simple 3D projection to 2D screen with camera position and angle