What do the terms “CPU bound” and “I/O bound” mean?

What do the terms "CPU bound" and "I/O bound" mean?

A program is CPU bound if it would go faster if the CPU were faster, i.e. it spends the majority of its time simply using the CPU (doing calculations). A program that computes new digits of π will typically be CPU-bound, it's just crunching numbers.

A program is I/O bound if it would go faster if the I/O subsystem was faster. Which exact I/O system is meant can vary; I typically associate it with disk, but of course networking or communication in general is common too. A program that looks through a huge file for some data might become I/O bound, since the bottleneck is then the reading of the data from disk (actually, this example is perhaps kind of old-fashioned these days with hundreds of MB/s coming in from SSDs).

CPU Bound means the rate at which process progresses is limited by the speed of the CPU. A task that performs calculations on a small set of numbers, for example multiplying small matrices, is likely to be CPU bound.

I/O Bound means the rate at which a process progresses is limited by the speed of the I/O subsystem. A task that processes data from disk, for example, counting the number of lines in a file is likely to be I/O bound.

Memory bound means the rate at which a process progresses is limited by the amount memory available and the speed of that memory access. A task that processes large amounts of in memory data, for example multiplying large matrices, is likely to be Memory Bound.

Cache bound means the rate at which a process progress is limited by the amount and speed of the cache available. A task that simply processes more data than fits in the cache will be cache bound.

The solution to being I/O bound isn't necessarily to get more Memory. In some situations, the access algorithm could be designed around the I/O, Memory or Cache limitations. See Cache Oblivious Algorithms.

Multi-threading is where it tends to matter the most

In this answer, I will investigate one important use case of distinguishing between CPU vs IO bounded work: when writing multi-threaded code.

Consider a program that sums all the values of a single vector:

Parallelizing that by splitting the array equally for each of your cores is of limited usefulness on common modern desktops. 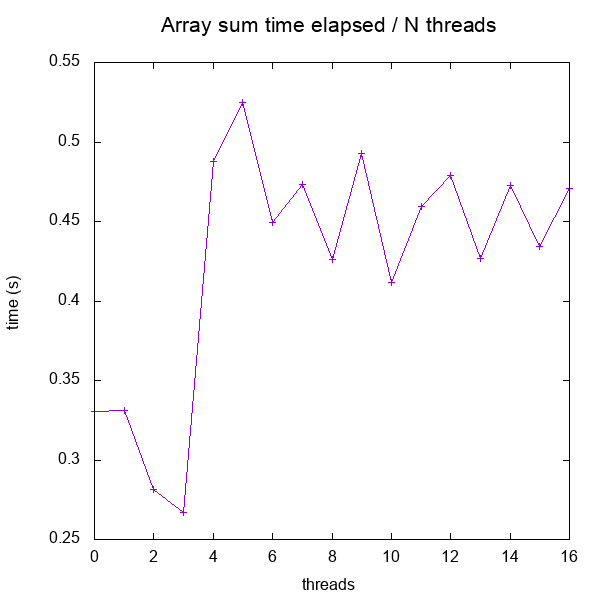 Note that there is a lot of variance between run however. But I can't increase the array size much further since I'm already at 8GiB, and I'm not in the mood for statistics across multiple runs today. This seemed however like a typical run after doing many manual runs.

I don't know enough computer architecture to fully explain the shape of the curve, but one thing is clear: the computation does not become 8x faster as naively expected due to me using all my 8 threads! For some reason, 2 and 3 threads was the optimum, and adding more just makes things much slower.

Compare this to CPU bound work, which actually does get 8 times faster: What do 'real', 'user' and 'sys' mean in the output of time(1)?

The reason it is all processors share a single memory bus linking to RAM:

so the memory bus quickly becomes the bottleneck, not the CPU.

So the CPU work done per byte of input data is too small, and we call this an IO-bound process.

The only way to speed up that computation further, would be to speed up individual memory accesses with new memory hardware, e.g. Multi-channel memory.

Upgrading to a faster CPU clock for example would not be very useful.

How to find out if you are CPU or IO bound

Non-RAM IO bound like disk, network: ps aux, then check if CPU% / 100 < n threads. If yes, you are IO bound, e.g. blocking reads are just waiting for data and the scheduler is skipping that process. Then use further tools like sudo iotop to decide which IO is the problem exactly.

GPUs have an IO bottleneck when you first transfer the input data from the regular CPU readable RAM to the GPU.

Therefore, GPUs can only be better than CPUs for CPU bound applications.

Once the data is transferred to the GPU however, it can operate on those bytes faster than the CPU can, because the GPU:

Therefore the GPU can be faster then a CPU if your application:

These designs choices originally targeted the application of 3D rendering, whose main steps are as shown at What are shaders in OpenGL and what do we need them for?

and so we conclude that those applications are CPU-bound.

With the advent of programmable GPGPU, we can observe several GPGPU applications that serve as examples of CPU bound operations:

As a quick case study, I want to point out to the Python Global Interpreter Lock (GIL): What is the global interpreter lock (GIL) in CPython?

Therefore, here we have an example where CPU-bound content is not suitable and I/O bound is.

In general, when optimizing computer programs, one tries to seek out the bottleneck and eliminate it. Knowing that your program is CPU bound helps, so that one doesn't unnecessarily optimize something else.

[And by "bottleneck", I mean the thing that makes your program go slower than it otherwise would have.]

Another way to phrase the same idea:

(I used "may be" because you need to take other resources into account. Memory is one example.)

If your program is running lots of program instructions and not waiting for I/O, then it is said to be CPU bound. Speeding up the CPU will make the program run faster.

In either case, the key to speeding up the program might not be to speed up the hardware, but to optimize the program to reduce the amount of IO or CPU it needs, or to have it do I/O while it also does CPU intensive stuff.

I/O bound refers to a condition in which the time it takes to complete a computation is determined principally by the period spent waiting for input/output operations to be completed.

This is the opposite of a task being CPU bound. This circumstance arises when the rate at which data is requested is slower than the rate it is consumed or, in other words, more time is spent requesting data than processing it.

The core of async programming is the Task and Task objects, which model asynchronous operations. They are supported by the async and await keywords. The model is fairly simple in most cases:

The await keyword is where the magic happens. It yields control to the caller of the method that performed await, and it ultimately allows a UI to be responsive or a service to be elastic.

CPU-bound Example: Performing a Calculation for a Game

Examples above showed how you can use async and await for I/O-bound and CPU-bound work. It's key that you can identify when a job you need to do is I/O-bound or CPU-bound, because it can greatly affect the performance of your code and could potentially lead to misusing certain constructs.

Here are two questions you should ask before you write any code:

Will your code be "waiting" for something, such as data from a database?

Will your code be performing a very expensive computation?

If the work you have is I/O-bound, use async and await without Task.Run. You should not use the Task Parallel Library. The reason for this is outlined in the Async in Depth article.

If the work you have is CPU-bound and you care about responsiveness, use async and await but spawn the work off on another thread with Task.Run. If the work is appropriate for concurrency and parallelism, you should also consider using the Task Parallel Library.

An application is CPU-bound when the arithmetic/logical/floating-point (A/L/FP) performance during the execution is mostly near the theoretical peak-performance of the processor (data provided by the manufacturer and determined by the characteristics of the processor: number of cores, frequency, registers, ALUs, FPUs, etc.).

The peek performance is very difficult to be achieved in real-world applications, for not saying impossible. Most of the applications access memory in different parts of the execution and the processor is not doing A/L/FP operations during several cycles. This is called Von Neumann Limitation due to the distance that exists between the memory and the processor.

If you want to be near the CPU peak-performance a strategy could be to try to reuse most of the data in the cache memory in order to avoid requiring data from the main memory. An algorithm that exploits this feature is the matrix-matrix multiplication (if both matrices can be stored in the cache memory). This happens because if the matrices are size n x n then you need to do about 2 n^3 operations using only 2 n^2 FP numbers of data. On the other hand matrix addition, for example, is a less CPU-bound or a more memory-bound application than the matrix multiplication since it requires only n^2 FLOPs with the same data.

In the following figure the FLOPs obtained with a naive algorithms for the matrix addition and the matrix multiplication in an Intel i5-9300H, is shown: 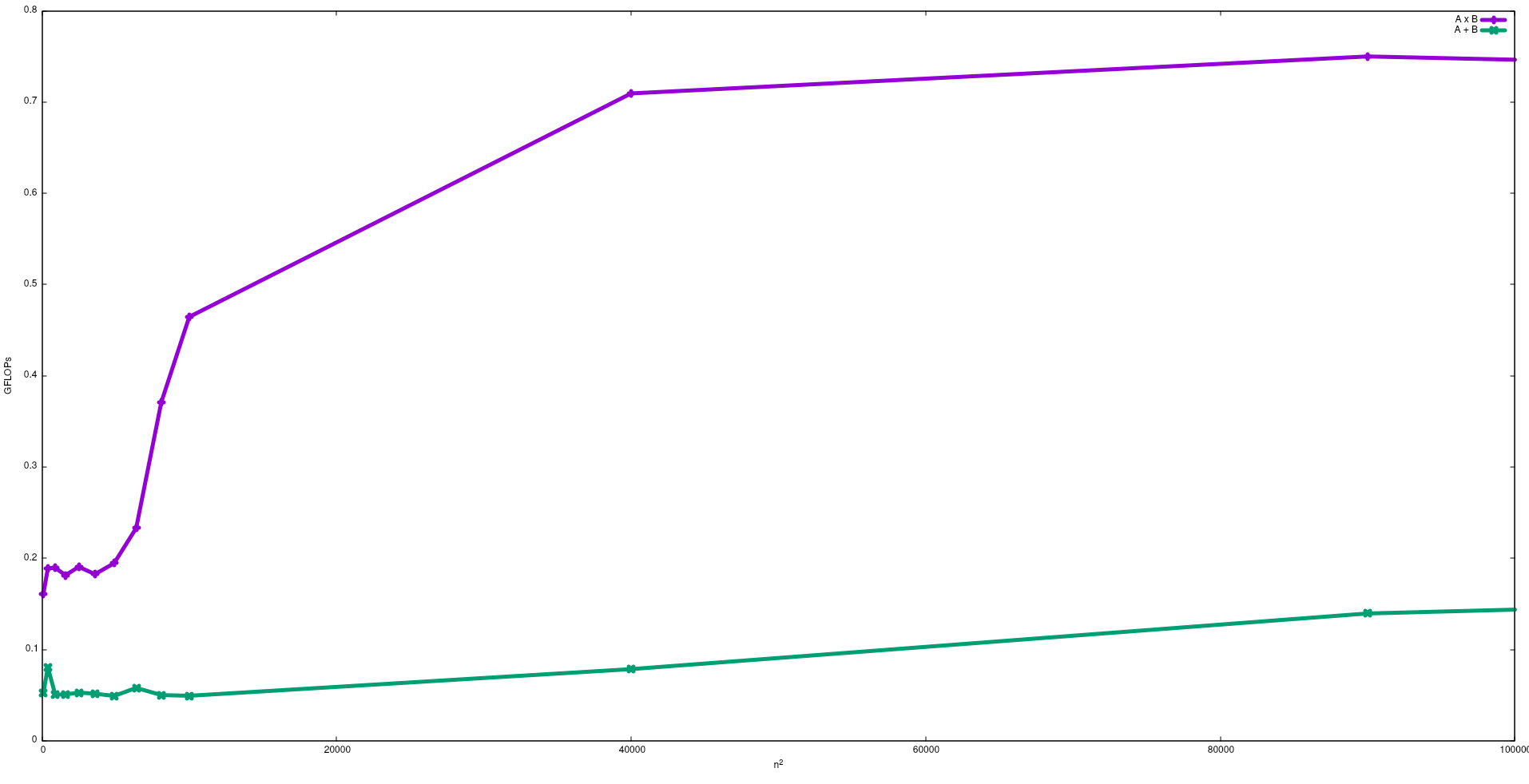 Note that as expected the performance of the matrix multiplication in bigger than the matrix addition. These results can be reproduced by running test/gemm and test/matadd available in this repository.

I suggest also to see the video given by J. Dongarra about this effect.

I/O Bound process:- If most part of the lifetime of a process is spent in i/o state, then the process is a i/o bound process.example:-calculator,internet explorer

CPU Bound process:- If most part of the process life is spent in cpu,then it is cpu bound process.

Not the answer you're looking for? Browse other questions tagged optimization terminology or ask your own question.

1905
What do 'real', 'user' and 'sys' mean in the output of time(1)?
877
What is tail call optimization?
254
What is the global interpreter lock (GIL) in CPython?
146
What do linkers do?
30
Threads configuration based on no. of CPU-cores
47
Getting started with Intel x86 SSE SIMD instructions
24
How to use GLUT/OpenGL to render to a file?
30
Are C++17 Parallel Algorithms implemented already?
23
What are shaders in OpenGL and what do we need them for?
31
What counts as CPU Intensive tasks (eg. sorting, searching etc?)
See more linked questions