What's the differences between VirtualAlloc and HeapAlloc?

There are lots of method to allocate memory in Windows environment, such as VirtualAlloc, HeapAlloc, malloc, new.

Thus, what's the difference among them?

Each API is for different uses. Each one also requires that you use the correct deallocation/freeing function when you're done with the memory.

A low-level, Windows API that provides lots of options, but is mainly useful for people in fairly specific situations. Can only allocate memory in (edit: not 4KB) larger chunks. There are situations where you need it, but you'll know when you're in one of these situations. One of the most common is if you have to share memory directly with another process. Don't use it for general-purpose memory allocation. Use VirtualFree to deallocate.

Allocates whatever size of memory you ask for, not in big chunks than VirtualAlloc. HeapAlloc knows when it needs to call VirtualAlloc and does so for you automatically. Like malloc, but is Windows-only, and provides a couple more options. Suitable for allocating general chunks of memory. Some Windows APIs may require that you use this to allocate memory that you pass to them, or use its companion HeapFree to free memory that they return to you.

The C way of allocating memory. Prefer this if you are writing in C rather than C++, and you want your code to work on e.g. Unix computers too, or someone specifically says that you need to use it. Doesn't initialise the memory. Suitable for allocating general chunks of memory, like HeapAlloc. A simple API. Use free to deallocate. Visual C++'s malloc calls HeapAlloc.

The C++ way of allocating memory. Prefer this if you are writing in C++. It puts an object or objects into the allocated memory, too. Use delete to deallocate (or delete[] for arrays). Visual studio's new calls HeapAlloc, and then maybe initialises the objects, depending on how you call it.

In recent C++ standards (C++11 and above), if you have to manually use delete, you're doing it wrong and should use a smart pointer like unique_ptr instead. From C++14 onwards, the same can be said of new (replaced with functions such as make_unique()).

There are also a couple of other similar functions like SysAllocString that you may be told you have to use in specific circumstances.

It is very important to understand the distinction between memory allocation APIs (in Windows) if you plan on using a language that requires memory management (like C or C++.) And the best way to illustrate it IMHO is with a diagram: 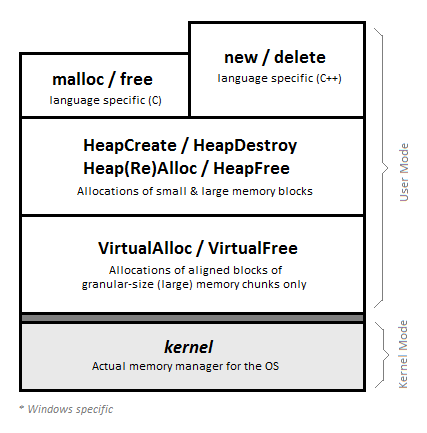 Note that this is a very simplified, Windows-specific view.

The way to understand this diagram is that the higher on the diagram a memory allocation method is, the higher level implementation it uses. But let's start from the bottom.

It provides all memory reservations & allocations for the operating system, as well as support for memory-mapped files, shared memory, copy-on-write operations, etc. It's not directly accessible from the user-mode code, so I'll skip it here.

These are the lowest level APIs available from the user mode. The VirtualAlloc function basically invokes ZwAllocateVirtualMemory that in turn does a quick syscall to ring0 to relegate further processing to the kernel memory manager. It is also the fastest method to reserve/allocate block of new memory from all available in the user mode.

But it comes with two main conditions:

So what is this system granularity? You can get it by calling GetSystemInfo. It is returned as the dwAllocationGranularity parameter. Its value is implementation (and possibly hardware) specific, but on many 64-bit Windows systems it is set at 0x10000 bytes, or 64K.

So what all this means, is that if you try to allocate, say just an 8 byte memory block with VirtualAlloc:

If successful, pAddress will be aligned on the 0x10000 byte boundary. And even though you requested only 8 bytes, the actual memory block that you will get will be the entire page (or, something like 4K bytes. The exact page size is returned in the dwPageSize parameter.) But, on top of that, the entire memory block spanning 0x10000 bytes (or 64K in most cases) from pAddress will not be available for any further allocations. So in a sense, by allocating 8 bytes you could as well be asking for 65536.

So the moral of the story here is not to substitute VirtualAlloc for generic memory allocations in your application. It must be used for very specific cases, as is done with the heap below. (Usually for reserving/allocating large blocks of memory.)

In a nutshell, the heap functions are basically a wrapper for VirtualAlloc function. Other answers here provide a pretty good concept of it. I'll add that, in a very simplistic view, the way heap works is this:

Another good thing about heap is that you don't really need to create one. It is generally created for you when your process starts. So one can access it by calling GetProcessHeap function.

Is a language-specific wrapper for the heap functions. Unlike HeapAlloc, HeapFree, etc. these functions will work not only if your code is compiled for Windows, but also for other operating systems (such as Linux, etc.)

This is a recommended way to allocate/free memory if you program in C. (Unless, you're coding a specific kernel mode device driver.)

Come as a high level (well, for C++) memory management operators. They are specific for the C++ language, and like malloc for C, are also the wrappers for the heap functions. They also have a whole bunch of their own code that deals C++-specific initialization of constructors, deallocation in destructors, raising an exception, etc.

These functions are a recommended way to allocate/free memory and objects if you program in C++.

Lastly, one comment I want to make about what has been said in other responses about using VirtualAlloc to share memory between processes. VirtualAlloc by itself does not allow sharing of its reserved/allocated memory with other processes. For that one needs to use CreateFileMapping API that can create a named virtual memory block that can be shared with other processes. It can also map a file on disk into virtual memory for read/write access. But that is another topic.

HeapAlloc is essentially what malloc and new both eventually call. It is designed to be very fast and usable under many different types of scenarios of a general purpose allocation. It is the "Heap" in a classic sense. Heaps are actually setup by a VirtualAlloc, which is what is used to initially reserve allocation space from the OS. After the space is initialized by VirtualAlloc, various tables, lists and other data structures are configured to maintain and control the operation of the HEAP. Some of that operation is in the form of dynamically sizing (growing and shrinking) the heap, adapting the heap to particular usages (frequent allocations of some size), etc..

new and malloc are somewhat the same, malloc is essentially an exact call into HeapAlloc( heap-id-default ); new however, can [additionally] configure the allocated memory for C++ objects. For a given object, C++ will store vtables on the heap for each caller. These vtables are redirects for execution and form part of what gives C++ it's OO characteristics like inheritance, function overloading, etc...

Some other common allocation methods like _alloca() and _malloca() are stack based; FileMappings are really allocated with VirtualAlloc and set with particular bit flags which designate those mappings to be of type FILE.

Most of the time, you should allocate memory in a way which is consistent with the use of that memory ;). new in C++, malloc for C, VirtualAlloc for massive or IPC cases.

*** Note, large memory allocations done by HeapAlloc are actually shipped off to VirtualAlloc after some size (couple hundred k or 16 MB or something I forget, but fairly big :) ).

*** EDIT I briefly remarked about IPC and VirtualAlloc, there is also something very neat about a related VirtualAlloc which none of the responders to this question have discussed.

VirtualAllocEx is what one process can use to allocate memory in an address space of a different process. Most typically, this is used in combination to get remote execution in the context of another process via CreateRemoteThread (similar to CreateThread, the thread is just run in the other process).

VirtualAlloc => Allocates straight into virtual memory, you reserve/commit in blocks. This is great for large allocations, for example large arrays.

HeapAlloc / new => allocates the memory on the default heap (or any other heap that you may create). This allocates per object and is great for smaller objects. The default heap is serializable therefore it has guarantee thread allocation (this can cause some issues on high performance scenarios and that's why you can create your own heaps).

malloc => uses the C runtime heap, similar to HeapAlloc but it is common for compatibility scenarios.

The last model on the memory world is memory mapped files, this scenario is great for large chunk of data (like large files). This is used internally when you open an EXE (it does not load the EXE in memory, just creates a memory mapped file).

3
When to use VirtualAlloc Vs new?
2
where the virtualAlloc function reserve memory in virtual memory(paging file) or RAM?
0
windows memory management: Difference between VirtualAlloc() and heap functions
59
Is memory allocation a system call?
1
How does the operating system determine which region to allocate when lpAddress is null in VirtualAlloc
1
does rtlheapalloc calls virtualalloc internally?

8976
What and where are the stack and heap?
533
Which is faster: Stack allocation or Heap allocation
405
Create an empty object in JavaScript with {} or new Object()?
176
Difference between "on-heap" and "off-heap"
189
What is the difference between buffer and cache memory in Linux?
958
Why should C++ programmers minimize use of 'new'?
66
malloc() vs. HeapAlloc()
0
What different attributes between malloc() and VirtualAlloc() to allocate a memory in windows?