What are good grep tools for Windows? [closed]

Ask Question
Asked 14 years ago
Modified 6 months ago
Viewed 558k times
288
As it currently stands, this question is not a good fit for our Q&A format. We expect answers to be supported by facts, references, or expertise, but this question will likely solicit debate, arguments, polling, or extended discussion. If you feel that this question can be improved and possibly reopened, visit the help center for guidance.
Closed 10 years ago.
This question's answers are a community effort. Edit existing answers to improve this post. It is not currently accepting new answers or interactions.

Any recommendations on grep tools for Windows? Ideally ones that could leverage 64-bit OS.

I'm aware of Cygwin, of course, and have also found PowerGREP, but I'm wondering if there are any hidden gems out there?

FINDSTR is fairly powerful, supports regular expressions and has the advantages of being on all Windows machines already.

Based on recommendations in the comments, I've started using grepWin and it's fantastic and free.

(I'm still a fan of PowerGREP, but I don't use it anymore.)

I know you already mentioned it, but PowerGREP is awesome.

Some of my favorite features are:

Now I realize that the other grep tools can do all of the above. It's just that PowerGREP packages all of the functionality into a very easy-to-use GUI.

From the same wonderful folks who brought you RegexBuddy and who I have no affiliation with beyond loving their stuff. (It should be noted that RegexBuddy includes a basic version of grep (for Windows) itself and it costs a lot less than PowerGREP.)

Grep tools with a graphical interface 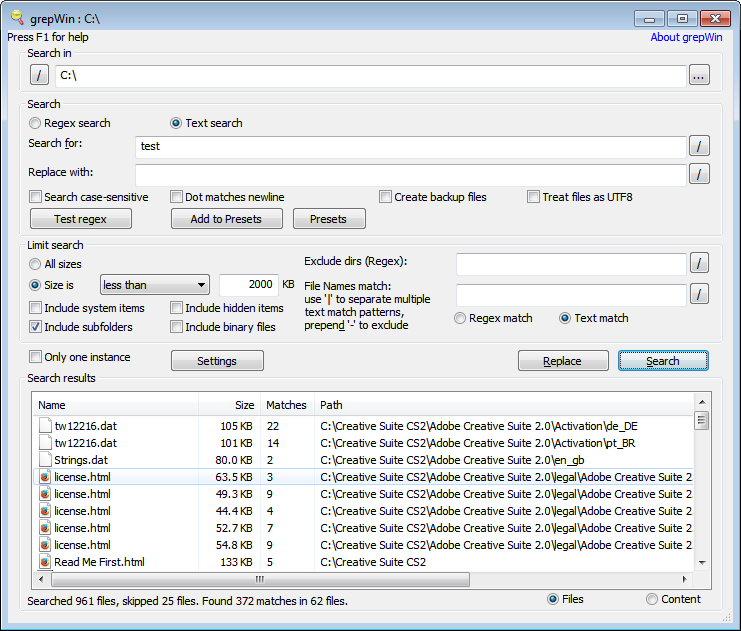 I've been using grepWin which was written by one of the TortoiseSVN guys. It does the job on Windows...

Another grep tool I now use all the time on Windows is AstroGrep: 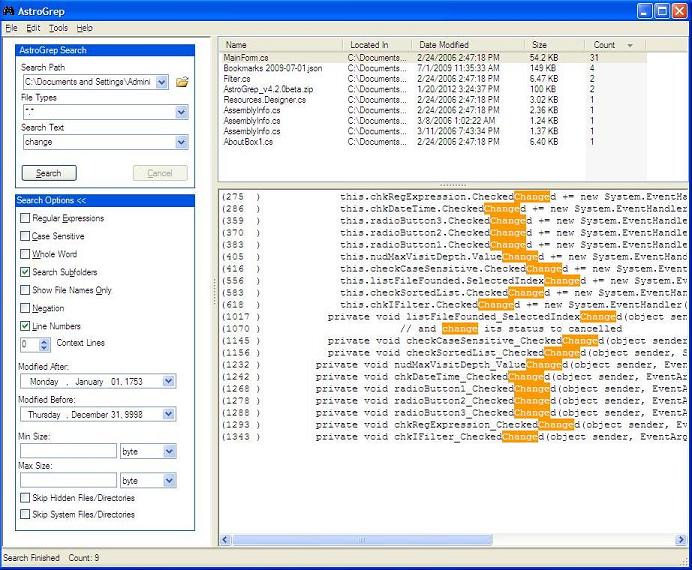 Its ability to show me more than just the line search (i.e. the --context=NUM of a command-line grep) is invaluable.
And it is fast. Very fast, even on an old computer with non-SSD drive (I know, they used to do this hard drive with spinning disks, called platters, crazy right?)

It is free.
It is portable (simple zip archive to unzip).

You can download it for example here: (site ftp)

All the usual options are here.

That, combined with gawk and xargs (includes 'find', from GnuWin32), and you can really script like you were on Unix!

See also the options I am using to grep recursively:

PowerShell's Select-String cmdlet was fine in v1.0, but it is significantly better for v2.0. Having PowerShell built in to recent versions of Windows means your skills here will always be useful, without first installing something.

I find it expedient to create an function gcir for Get-ChildItem -Recurse ., with smarts to pass parameters correctly, and an alias ss for Select-String. So you an write:

It may not exactly fall into the 'grep' category, but I couldn't get by on Windows without a utility called AgentRansack. It's a GUI-based "find in files" utility with regex support.

It's dead simple to right-click on a folder, hit "ransack.." and find files containing what you're looking for. It is extremely fast too.

PowerShell has been mentioned a few times. Here is how you would actually use it in a grepish way:

It recursively searches all text files in the current directory tree for SomeString with case sensitivity.

Even better, run this:

Then to really make it magical, add the function alias to your PowerShell Profile and you can almost dull the pain of not having proper command line tools.

It's free, open source, and has a simple interface. I use it to search code all the time.

Git on Windows = grep in cmd.exe

I just found out installing Git will give you some basic Linux commands: cat, grep, scp and all other good ones.

Install then add the Git bin folder to your PATH and then your cmd.exe has basic Linux functionality!

ack works well on Windows (if you've got Perl). I find it better than grep for many uses.

dnGREP is an open source grep tool for Windows. It supports a number of cool features including:

IMHO, it has a nice and clean interface too :)

Cygwin includes grep. All the GNU tools and Unix stuff works great on Windows if you install Cygwin.

I always use WinGREP, but I've had issues with it not letting go of files.

Well, besides the Windows port of the GNU grep, there's also Borland's grep (very similar to the GNU one) available in the freeware Borland's Free C++ Compiler (it's a freeware with command-line tools).

The tail that is packaged is quite a good little application as well.

I'm the author of Aba Search and Replace. Just like PowerGREP, it supports regular expressions, saving patterns for further use, undo for replacements, preview with syntax highlight for HTML/CSS/JS/PHP, different encodings, including UTF-8 and UTF-16.

In comparison with PowerGREP, the GUI is less cluttered. Aba instantly starts searching as you are typing the pattern (incremental search), so you can experiment with regular expressions and immediately see the results.

You are welcomed to try my tool; I will be happy to answer any questions.

I wanted a free grep tool for Windows that allowed you to right click on a folder and do a regex search of every file - without any nag screen.

The following is a quick solution based on the findstr mentioned in a previous post.

Create a text file somewhere on your hard drive where you keep long lived tools. Rename to .bat or .cmd and paste the following into it:

I renamed the shortcut to 1 GREP to keep it at the top of the SendTo list.

Things that I'd like to do next with this is pipe the output of findstr through something that would generate an html file so that you could click on each output line to open that file. Also, I don't think it works with shortcuts to folders. I'd have to inspect the parameter and see if it contains ".lnk".

My tool of choice is the appropriately named Windows Grep:

UnxUtils is the one I use, and it works perfectly for me...

I used Borland's grep for years, but I just found a pattern that it won't match. Eeeks. What else hasn't it found over the years? I wrote a simple text search replacement that does recursion like grep - it's FS.EXE on SourceForge.

Another good choice is MSYS. It gives you a bunch of other GNU utilities to allow you to be more productive.

PowerShell's Select-String is similar. It does not have the same options and semantics, but it's still powerful.

I've been using AJC Grep daily for years. The only major limitation I've found is that file paths are limited to 255 characters and it stops when it encounters one, rather than just issuing a warning. It's annoying but doesn't happen very often.

I use it on 64-bit Windows 7 Ultimate, so its 64-bit credentials are fine.

I've been using it forever and luckily it's still available. It's super fast and very small.

If you want a simple-to-use Windows Grep tool, I created one called P-Grep that I have made available for free download from my website: www.adjutantit.com - home menu, downloads.

Windows Grep seemed to have problems with a large number of files, so I wrote my own - which seems more reliable. You can select a folder, right click and send it to P-Grep. The sendto folder gets updated during installation.

I have Cygwin installed on my machine and put the Cygwin bin directory in my environmental path, so the Cygwin grep works like normal in a command line which solves all my scripting needs for grep at the moment.

If none of the solutions is quite what you are looking for, perhaps you could write a wrapper to FindStr that does exactly what you require?

FindStr is pretty good anyway so it should just be knocking a GUI up (if you want it) and providing a few extra features (like combining it with Find to find the count of files which contain a specified string [mentioned above]).

This, of course, assumes you have the requirement, time and inclination to do this!

-1
Grep alternative in Windows
0
Grep is not recognized as command in windows
2007
How do I recursively grep all directories and subdirectories?
449
Why does the 260 character path length limit exist in Windows?
202
Is there a Pattern Matching Utility like GREP in Windows?
25
Free alternative(s) to PowerGREP
4
How do I open "Find Files" dialog from command-line in Windows XP to search a specific folder?
5
compare two text files using linq?
4
PHP read specific lines from large text 600MB file
3
Windows equivalent to grep -B (before context) and -A (after context)?
See more linked questions

1248
How can I develop for iPhone using a Windows development machine?
231
Objective-C for Windows
607
How do I get current date/time on the Windows command line in a suitable format for usage in a file/folder name?
883
Use grep --exclude/--include syntax to not grep through certain files
446
How to clear the interpreter console?
323
What languages are Windows, Mac OS X and Linux written in?
232
Windows recursive grep command-line
770
How to grep Git commit diffs or contents for a certain word
1027
Can't start Eclipse - Java was started but returned exit code=13
1158
Filename too long in Git for Windows