I know that you can make a virtual network interface in Windows (see here), and in Linux it is also pretty easy with ip-aliases, but does something similar exist for Mac OS X? I've been looking for loopback adapters, virtual interfaces and couldn't find a good solution.

You can create a new interface in the networking panel, based on an existing interface, but it will not act as a real fully functional interface (if the original interface is inactive, then the derived one is also inactive).

This scenario is needed when working in a completely disconnected situation. Even then, it makes sense to have networking capabilities when running servers in a VMWare installation. Those virtual machines can be reached by their IP address, but not by their DNS name, even if I run a DNS server in one of those virtual machines. By configuring an interface to use the virtual DNS server, I thought I could test some DNS scenario's. Unfortunately, no interface is resolving DNS names if none of them are inactive...

The loopback adapter is always up.

Replying in particular to:

You can create a new interface in the networking panel, based on an existing interface, but it will not act as a real fully functional interface (if the original interface is inactive, then the derived one is also inactive).

Then you would also manipulate the particular Location you want this NetworkService for (remember Mac OS X can configure all network interfaces dependent on your "Location"). The default location UUID can be obtained in the root of the PropertyList as the key "CurrentSet". After figuring out which location (or set) you want, expand the Set property, and add entries under Global/IPv4/ServiceOrder with the UUID of the new NetworkService. Also under the Set property you need to expand the Service property and add the UUID here as a dictionary with one String entry with key __LINK__ and value as the UUID (use the other interfaces as an example).

After you have modified your preferences.plist file, just reboot, and the NetworkService will be available under SystemPreferences->Network. Note that we have mimicked an Ethernet device so Mac OS X layer of networking will note that "a cable is unplugged" and will not let you activate the interface through the GUI. However, since the underlying device is a tun/tap device and it has an IP address, the interface will become active and the proper routing will be added at the BSD level.

As a reference this is used to do special routing magic.

In case you got this far and are having trouble, you have to create the tun/tap device by opening one of the devices under /dev/. You can use any program to do this, but I'm a fan of good-old-fashioned C myself:

In regards to @bmasterswizzle's BRILLIANT answer - more specifically - to @DanRamos' question about how to force the new interface's link-state to "up".. I use this script, of whose origin I cannot recall, but which works fabulously (in coordination with @bmasterswizzles "Mona Lisa" of answers)...

I am NOT quite sure I understand the alteration to the prompt at the end, or...

but WHATEVER. it works. link light🚦: green✅. loves it💚. 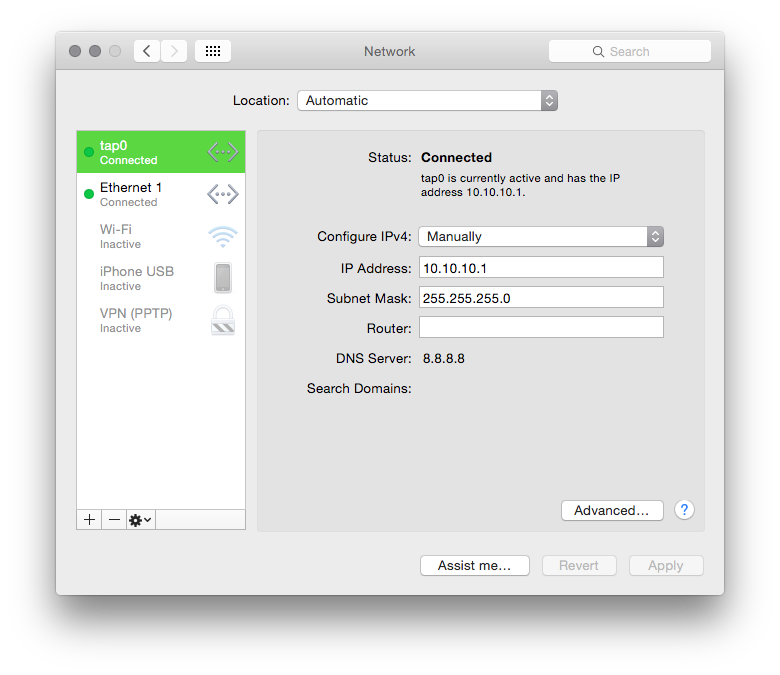 A few others seemed to hint at this, but the following demonstrates using ifconfig to create a vlan and test DNS on the virtual interface (using minidns) on OS X 10.9.5:

It's possible to use TUN/TAP device. http://tuntaposx.sourceforge.net/

What do you mean by

"but it will not act as a real fully functional interface (if the original interface is inactive, then the derived one is also inactive"

So did I understand you right, that you want to create an interface, not bound to any real interface? How would this interface then be used? E.g. if you disconnect all WLAN and pull all network cables, where would this interface send traffic to, if you send traffic to it? Maybe your question is a bit unclear, it might help a lot if rephrase it, so it's clear what you are actually trying to do with this "virtual interface" once you have it.

Take a look at this tutorial, it's for FreeBSD but also applies to OS X. http://people.freebsd.org/~arved/vlan/vlan_en.html

i have resorted to running PFSense, a BSD based router/firewall to achieve this goal….

why? because OS X Server gets so FREAKY without a Static IP…

I'm trying this is parallels…

will let ya know how it goes...

Now you have the new virtual interface in the gui and can manage IP addresses etc it in the normal way.

ifconfig -a will confirm that you have multiple IPs on the interface, and these will still be there when you reboot.

Basically you select a network adapter in the Networks pane of system preferences, then click the gear to "Duplicate Service". After the service is duplicated, you manually assign an IP in one of the private address ranges. Then ping it to make sure ;)

Not the answer you're looking for? Browse other questions tagged macos networking or ask your own question.