Environment: WebGL, Chrome. I have the following behavior when using transparent png's as textures for models: 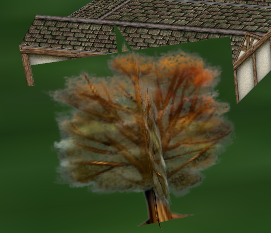 Both screenshots were made on same the scene at the same time from different camera positions. Textures are produced by the same algorithm.

I can't understand what's the difference between window and branches transparency. My main question is - how to fix the branches so as to not hide the objects behind them? Shader code is:

I played with enable/disable blending and depth_test, sometimes getting the desired results, but not sure if it's the proper way to do things.

You're running into depth buffer issues, it has nothing to do with your shader or blend modes.

What's happening is that the order that you render your transparent geometry in is affecting your ability to render behind it. This is because the depth buffer has no concept of transparent or non-transparent. As a result, even though they don't visually contribute to the scene those transparent pixels write themselves into the depth buffer anyway, and after that any pixels that you draw behind them will be discard because they're "not visible". If you drew the geometry behind the transparent object first, though, it would show correctly because it gets written into the frame before the transparent depth is put in place to discard it.

This is something that even large commercial game engines still struggle with to some degree, so don't feel bad about it causing some confusion. :)

There's no "perfect solution" to this problem, but what it really boils down to is trying to structure your scene like so:

Simply by flagging the bits of geometry that are transparent and rendering them after everything else you'll solve 90% of this problem, but the issue may still remain for overlapping transparent objects. That may not be an issue for you, depending on your scene, but if it's still causing artifacts you'll need to sort transparent objects by depth before you draw.

Discard fragments with alpha lower than, for example 0.5 might help (of course, there is side effect).

I am newbie with webgl and working with graphics on the whole. But maybe theoricall calling drawElements at each etaration twice or more than twice also could solve the problem? Also there was an article about almost the same problem with fonts, and the author solved it Just setting the parameter {alpha:false} For me it doesnt make sense, But it works.

Not the answer you're looking for? Browse other questions tagged transparency textures webgl or ask your own question.

3
WebGL transparent black
676
How to make a background 20% transparent on Android
9
How do I blend two textures with different co-ordinates in OpenGL ES 2.0 on iPhone?
3
Using translucent png's as textures and fading them OpenGL ES 2.0
31
Multiple transparent textures on the same mesh face in Three.js
0
Blank texture in webGL
3
WebGL batch drawing textures. Which has better performance and why?
1
OpenGL unwanted transparency with deferred shading
0
Xamarin IOS Opentk - BlendFunc with transparent textures