How do I override default PrimeFaces CSS with custom styles?

I've created my own theme as a separate Maven project, and it is loaded correctly.

Now I want to change the size of an component. For example, a <p:orderList>. It has a class called ui-orderlist-list which is defined in primefaces.css with a fixed 200x200 dimension. No matter what I do in my theme.css, it is overwritten by this attribute and there is no way I can make the content part of a <p:orderList> wider.

For other components I might want to override just one instance of a component, not all.

Can anyone please tell me how can I do all this?

Load your CSS after PrimeFaces one

You need to ensure that your CSS is loaded after the PrimeFaces one. You can achieve this by placing the <h:outputStylesheet> referencing your CSS file inside <h:body> instead of <h:head>:

You'll probably also see suggestions to put it in <f:facet name="last"> of <h:head> which is understood by PrimeFaces-specific HeadRenderer, but this is unnecessarily clumsy and would break when you have your own HeadRenderer.

You also need to ensure that your CSS selector is at least as specific as the PrimeFaces' default CSS selector on the particular element. You need to understand CSS Specificity and Cascading and Inheritance rules. For example, if PrimeFaces declares a style by default as follows

and you declare it as

You can use the webbrowser developer tools to find the exact CSS selector. Rightclick the element in question in the webbrowser (IE9/Chrome/Firefox+Firebug) and choose Inspect Element to see it. 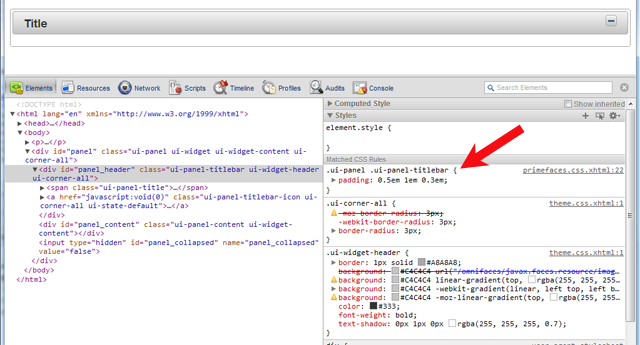 If you need to override a style for only a specific instance of the component and not all instances of the same component, then add a custom styleClass and hook on that instead. It is another case where specificity is used/applied. For example:

If a component does not support a styleClass and you are on jsf 2.2 or up, you can also use passtrough attributes and add a pt:class and have it end-up on the output.

In case you fail to properly load the CSS file in order or to figure the right CSS selector, you'll probably grab the !important workaround. This is Plain Wrong. It's an ugly workaround and not a real solution. It only confuses your style rules and yourself more in long term. The !important should only be used in order to override the values hardcoded in HTML element's style attribute from a CSS stylesheet file on (which is in turn also a bad practice, but in some rare cases unfortunately unavoidable).

you can create a new css file for example cssOverrides.css

and place all the overrides you want inside it, that way upgrading the primefaces version wont affect you ,

if it wont work try adding it to the h:body

this will reduce the size of all primefaces components /text

I'm using PrimeFaces 6.0. Here's some information I would have liked to have regarding this:

If you use <h:outputStylesheet/>, it will work, but your CSS will not be loaded last even if it's last in the <h:head></h:head> tags (other CSS files will be included afterwards). A trick you can do which I learned from here is to place it inside <f:facet name="last"></f:facet>, which must go inside the body, like so:

Then your CSS will be the last loaded. Note: you will still have to adhere to the specificity rules as BalusC outlined.

How to create more specific rules

The style rules used by PrimeFaces can be quite complex. An element can receive its styling from multiple CSS rules. It's good to know you can use filtering in the DOM inspector's style tab to search on the property you want to customise:

This screenshot was taken using Chrome, but filtering is also available in Firefox and Safari.

When you have found the rule you want to customise, you can simply create a more specific rule by prefixing it with html. For example, your could override .ui-corner-all like:

I usually just want to replace some color with another value. As colors can be used in many different rules it can be useful to create a ResourceHandler.

In the handler check for the PrimeFaces theme:

In the resource, replace the color:

And register it as follows in the faces-config.xml:

Not the answer you're looking for? Browse other questions tagged css jsf primefaces themes overriding or ask your own question.