How to use/locate LocalBroadcastManager as described in google docs and Service broadcast doc?

I tried to google it, but there is no code available to start with?

The documents say that I should use it if I want to do broadcast internally with in my app's process but I don't know where to look for this.

Update: I know how to use Broadcasts but don't know how to get LocalBroadcastManager available in my project.

I'll answer this anyway. Just in case someone needs it.

An activity that watches for notifications for the event named "custom-event-name".

The second activity that sends/broadcasts notifications.

With the code above, every time the button R.id.button_send is clicked, an Intent is broadcasted and is received by mMessageReceiver in ReceiverActivity.

In Eclipse, eventually I had to add Compatibility/Support Library by right-clicking on my project and selecting:

Once it was added, then I was able to use LocalBroadcastManager class in my code. 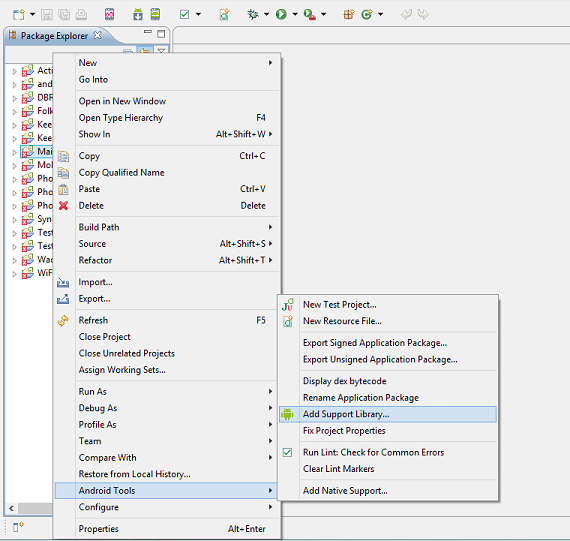 localbroadcastmanager is deprecated, use implementations of the observable pattern instead.

androidx.localbroadcastmanager is being deprecated in version 1.1.0

LocalBroadcastManager is an application-wide event bus and embraces layer violations in your app; any component may listen to events from any other component. It inherits unnecessary use-case limitations of system BroadcastManager; developers have to use Intent even though objects live in only one process and never leave it. For this same reason, it doesn’t follow feature-wise BroadcastManager .

These add up to a confusing developer experience.

You can replace usage of LocalBroadcastManager with other implementations of the observable pattern. Depending on your use case, suitable options may be LiveData or reactive streams.

The observe() method passes the fragment, which is an instance of LifecycleOwner, as the first argument. Doing so denotes that this observer is bound to the Lifecycle object associated with the owner, meaning:

The fact that LiveData objects are lifecycle-aware means that you can share them between multiple activities, fragments, and services.

How to change your global broadcast to LocalBroadcast

When you'll play enough with LocalBroadcastReceiver I'll suggest you to give Green Robot's EventBus a try - you will definitely realize the difference and usefulness of it compared to LBR. Less code, customizable about receiver's thread (UI/Bg), checking receivers availability, sticky events, events could be used as data delivery etc.

Please check the below code for registering, sending and receiving the broadcast message.

An example of an Activity and a Service implementing a LocalBroadcastManager can be found in the developer docs. I personally found it very useful.

EDIT: The link has since then been removed from the site, but the data is the following: https://github.com/carrot-garden/android_maven-android-plugin-samples/blob/master/support4demos/src/com/example/android/supportv4/content/LocalServiceBroadcaster.java

By declaring one in your AndroidManifest.xml file with the tag (also called static)

You will notice that the broadcast receiver declared above has a property of exported=”true”. This attribute tells the receiver that it can receive broadcasts from outside the scope of the application.
2. Or dynamically by registering an instance with registerReceiver (what is known as context registered)

There are three ways to send broadcasts:
The sendOrderedBroadcast method, makes sure to send broadcasts to only one receiver at a time. Each broadcast can in turn, pass along data to the one following it, or to stop the propagation of the broadcast to the receivers that follow.
The sendBroadcast is similar to the method mentioned above, with one difference. All broadcast receivers receive the message and do not depend on one another.
The LocalBroadcastManager.sendBroadcast method only sends broadcasts to receivers defined inside your application and does not exceed the scope of your application.

I am an iOS dev, so I made a solution similar to NotificationCenter:

Some class that want to observe notification must conform to observer protocol:

we can also use interface for same as broadcastManger here i am sharing the testd code for broadcastManager but by interface.

2-this is the first class that need implementation

so by this approach we can use the interface functioning same as broadcastManager.

Not the answer you're looking for? Browse other questions tagged android broadcastreceiver or ask your own question.

2819
How can I save an activity state using the save instance state?
2257
How do I center text horizontally and vertically in a TextView?
4228
How to close/hide the Android soft keyboard programmatically?
3102
How to stop EditText from gaining focus when an activity starts in Android?
2651
How can I fix 'android.os.NetworkOnMainThreadException'?
3922
Proper use cases for Android UserManager.isUserAGoat()?
8
Is there a way to tell if LocalBroadcastManager broadcasts were received?
279
FirebaseInstanceIdService is deprecated
0
Any alternative's for LocalBroadcastManager, like LiveData?