How to merge a specific commit in Git

I have forked a branch from a repository in GitHub and committed something specific to me. Now I found the original repository had a good feature which was at HEAD.

I want to merge it only without previous commits. What should I do? I know how to merge all commits:

'git cherry-pick' should be your answer here.

Apply the change introduced by an existing commit.

Do not forget to read bdonlan's answer about the consequence of cherry-picking in this post:
"Pull all commits from a branch, push specified commits to another", where:

Where C' has a different SHA-1 ID.
Likewise, cherry picking a commit from one branch to another basically involves generating a patch, then applying it, thus losing history that way as well.

This changing of commit IDs breaks git's merging functionality among other things (though if used sparingly there are heuristics that will paper over this).
More importantly though, it ignores functional dependencies - if C actually used a function defined in B, you'll never know.

You can use git cherry-pick to apply a single commit by itself to your current branch.

Let's try to take an example and understand:

I have a branch, say master, pointing to X <commit-id>, and I have a new branch pointing to Y <sha1>.

Now say for Y branch I have to gap-close the commits between the master branch and the new branch. Below is the procedure we can follow:

where local is the branch name. Any name can be given.

Merge the commits from master branch to new branch and also create a merge commit of log message with one-line descriptions from at most <n> actual commits that are being merged.

For more information and parameters about Git merge, please refer to:

Also if you need to merge a specific commit, then you can use:

Let's say you want to merge commit e27af03 from branch X to master.

I used to cherry pick, but found I had some mysterious issues from time to time. I came across a blog by Raymond Chen, a 25 year veteran at Microsoft, that describes some scenarios where cherry picking can cause issues in certain cases.

One of the rules of thumb is, if you cherry pick from one branch into another, then later merge between those branches, you're likely sooner or later going to experience issues.

The only issue I had with Raymond's blog is he did not provide a full working example. So I will attempt to provide one here.

The question above asks how to merge only the commit pointed to by the HEAD in the a-good-feature branch over to master.

Here is how that would be done:

Here is an example of those commands:

It might be worth noting that the last line that merged into the a-good-feature branch used the "-s ours" merge strategy. The reason for this is because we simply need to create a commit in the a-good-feature branch that points to a new common ancestor, and since the code is already in that branch, we want to make sure there isn't any chance of a merge conflict. This becomes more important if the commit(s) you are merging are not the most recent.

The scenarios and details surrounding partial merges can get pretty deep, so I recommend reading through all 10 parts of Raymond Chen's blog to gain a full understanding of what can go wrong, how to avoid it, and why this works.

The leading answers describe how to apply the changes from a specific commit to the current branch. If that's what you mean by "how to merge," then just use cherry-pick as they suggest.

But if you actually want a merge, i.e. you want a new commit with two parents -- the existing commit on the current branch, and the commit you wanted to apply changes from -- then a cherry-pick will not accomplish that.

Having true merge history may be desirable, for example, if your build process takes advantage of git ancestry to automatically set version strings based on the latest tag (using git describe).

Instead of cherry-pick, you can do an actual git merge --no-commit, and then manually adjust the index to remove any changes you don't want.

Suppose you're on branch A and you want to merge the commit at the tip of branch B:

Now you're set up to create a commit with two parents, the current tip commits of A and B. However you may have more changes applied than you want, including changes from earlier commits on the B branch. You need to undo these unwanted changes, then commit.

(There may be an easy way to set the state of the working directory and the index back to way it was before the merge, so that you have a clean slate onto which to cherry-pick the commit you wanted in the first place. But I don't know how to achieve that clean slate. git checkout HEAD and git reset HEAD will both remove the merge state, defeating the purpose of this method.)

So manually undo the unwanted changes. For example, you could

When you're finished adjusting things, create your commit:

Now you have only the change you wanted, and the ancestry tree shows that you technically merged from B.

If you have committed changes to master branch. Now you want to move that same commit to release-branch. Check the commit id(Eg:xyzabc123) for the commit.

We will have to use git cherry-pick <commit-number>

Scenario: I am on a branch called release and I want to add only few changes from master branch to release branch.

Step 1: checkout the branch where you want to add the changes

Step 2: get the commit number of the changes u want to add

In my use case we had a similar need for CI CD. We used git flow with develop and master branches. Developers are free to merge their changes directly to develop or via a pull request from a feature branch. However to master we merge only the stable commits from the develop branch in an automated way via Jenkins.

In this case doing cherry-pick is not a good option. However we create a local-branch from the commit-id then merge that local-branch to master and perform mvn clean verify(we use maven). If success then release production version artifact to nexus using maven release plugin with localCheckout=true option and pushChanges=false. Finally when everything is success then push the changes and tag to origin.

Assuming you are on master if done manually. However on jenkins, when you checkout the repo you will be on the default branch(master if configured).

This will give you a full control with a fearless merge or conflict hell.

Feel free to advise in case there is any better option.

If you are new to cherrypick try the GitHub desktop version, when you select cherry-pick option, GitHub will ask you to select the branch you want to push a commit. 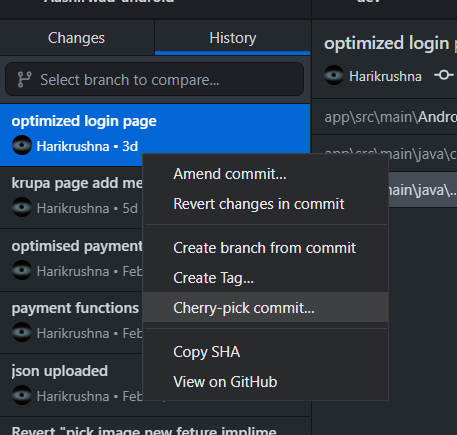 I'll suggest an answer. That is to manually change and commit to the target branch by hand via Export, and for using a tool like tortoise, the export can be really an effective way to accomplish this. I know this works quite well in SVN, and so far in some tests from git has had the same success, as long as they are 100% identical there shouldn't be any conflict resolution from future merging of feature branches.

Let's suppose we wanted all the files from ModuleA's FeatureA branch to be in the master branch. Assume for a moment this is a huge project and there are other modules, and we know from experience that ModuleA has no dependencies that would cause a compiler or functional issue from the new changes of the feature branch. Select the ModuleA folder and choose Export from tortoise. Then pick ModuleA of master to export it into. Finally, do a file difference check on each file to review the changes, using the diff tool, be sure that all calls out are still compatible. Make sure it compiles, thoroughly test. Commit, push. This solution is a time-tested and effective for svn.

4
How to merge hot fix on branch to master
-1
Merging the changes included by only one commit in my branch?
0
Git force a manual merge
0
How to get commits merged to your branch?
2137
When do you use Git rebase instead of Git merge?
1044
How to copy commits from one branch to another?
1028
Git workflow and rebase vs merge questions
807
How to cherry-pick a range of commits and merge them into another branch?
212
How do I merge a specific commit from one branch into another in Git?
386
What Git branching models work for you?
See more linked questions