How to draw text using only OpenGL methods?

I don't have the option to use but OpenGL methods (that is glxxx() methods). I need to draw text using gl methods only. After reading the red book, I understand that it is possible only through the glBitmap() method. If this is the only possible way, then can any one help me with the pixel array information for all the characters. Is there is any other way to draw text?

Why it is hard

Popular font formats like TrueType and OpenType are vector outline formats: they use Bezier curves to define the boundary of the letter.

Transforming those formats into arrays of pixels (rasterization) is too specific and out of OpenGL's scope, specially because OpenGl does not have non-straight primitives (e.g. see Why is there no circle or ellipse primitive in OpenGL?)

The easiest approach is to first raster fonts ourselves on the CPU, and then give the array of pixels to OpenGL as a texture.

OpenGL then knows how to deal with arrays of pixels through textures very well.

We could raster characters for every frame and re-create the textures, but that is not very efficient, specially if characters have a fixed size.

The more efficient approach is to raster all characters you plan on using and cram them on a single texture.

And then transfer that to the GPU once, and use it texture with custom uv coordinates to choose the right character.

This approach is called a texture atlas and it can be used not only for textures but also other repeatedly used textures, like tiles in a 2D game or web UI icons.

The Wikipedia picture of the full texture, which is itself taken from freetype-gl, illustrates this well: 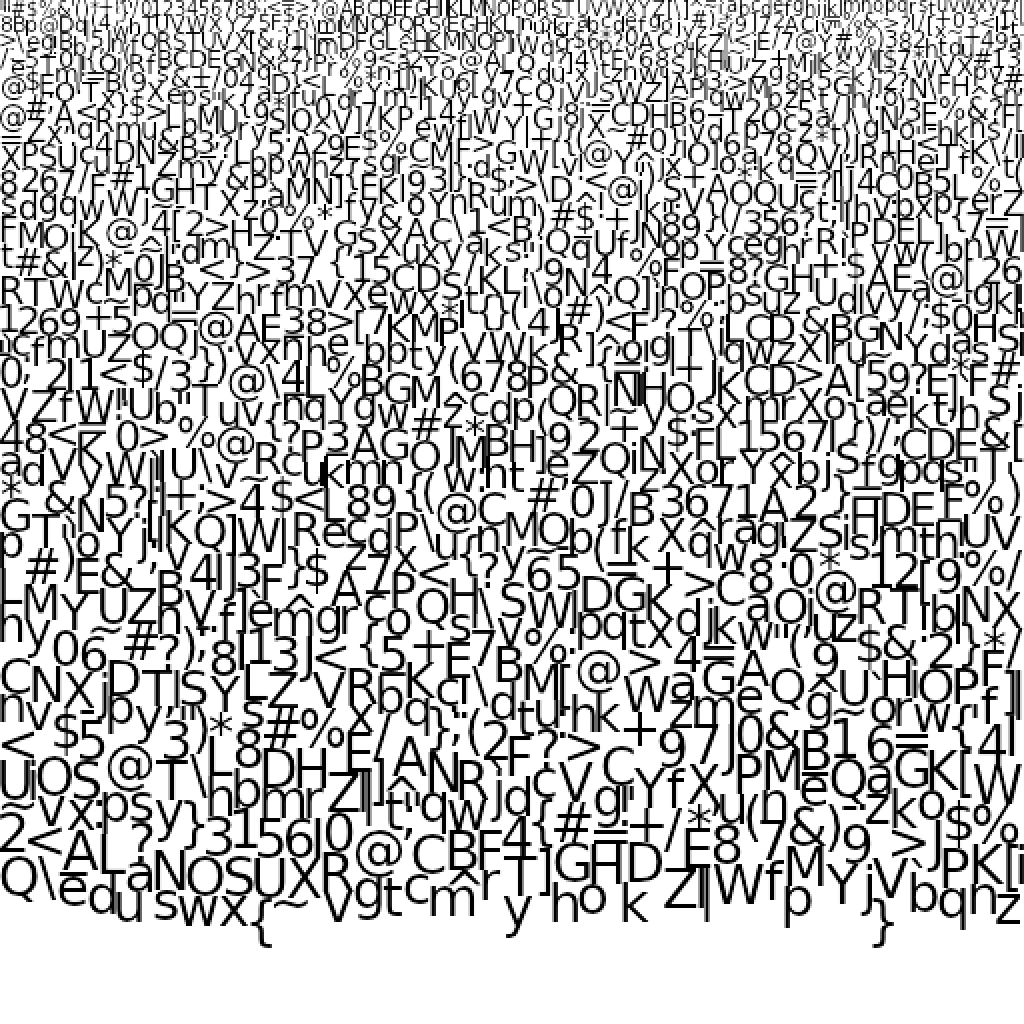 I suspect that optimizing character placement to the smallest texture problem is an NP-hard problem, see: What algorithm can be used for packing rectangles of different sizes into the smallest rectangle possible in a fairly optimal way?

The same technique is used in web development to transmit several small images (like icons) at once, but there it is called "CSS Sprites": https://css-tricks.com/css-sprites/ and are used to hide the latency of the network instead of that of the CPU / GPU communication.

There also exist methods which don't use the CPU raster to textures.

CPU rastering is simple because it uses the GPU as little as possible, but we also start thinking if it would be possible to use the GPU efficiency further.

Fonts inside of the 3D geometry with perspective

Rendering fonts inside of the 3D geometry with perspective (compared to an orthogonal HUD) is much more complicated, because perspective could make one part of the character much closer to the screen and larger than the other, making an uniform CPU discretization (e.g. raster, tesselation) look bad on the close part. This is actually an active research topic: 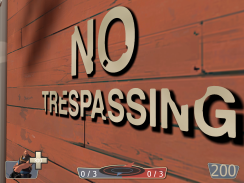 Distance fields are one of the popular techniques now.

The examples that follow were all tested on Ubuntu 15.10.

Because this is a complex problem as discussed previously, most examples are large, and would blow up the 30k char limit of this answer, so just clone the respective Git repositories to compile.

They are all fully open source however, so you can just RTFS.

FreeType looks like the dominant open source font rasterization library, so it would allow us to use TrueType and OpenType fonts, making it the most elegant solution.

Those seem less good than FreeType, but may be more lightweight:

The font was created by the author manually and stored in a single .png file. Letters are stored in an array form inside the image.

This method is of course not very general, and you would have difficulties with internationalization.

Textures are generated from DDS files.

The tutorial explains how the DDS files were created, using CBFG and Paint.Net. 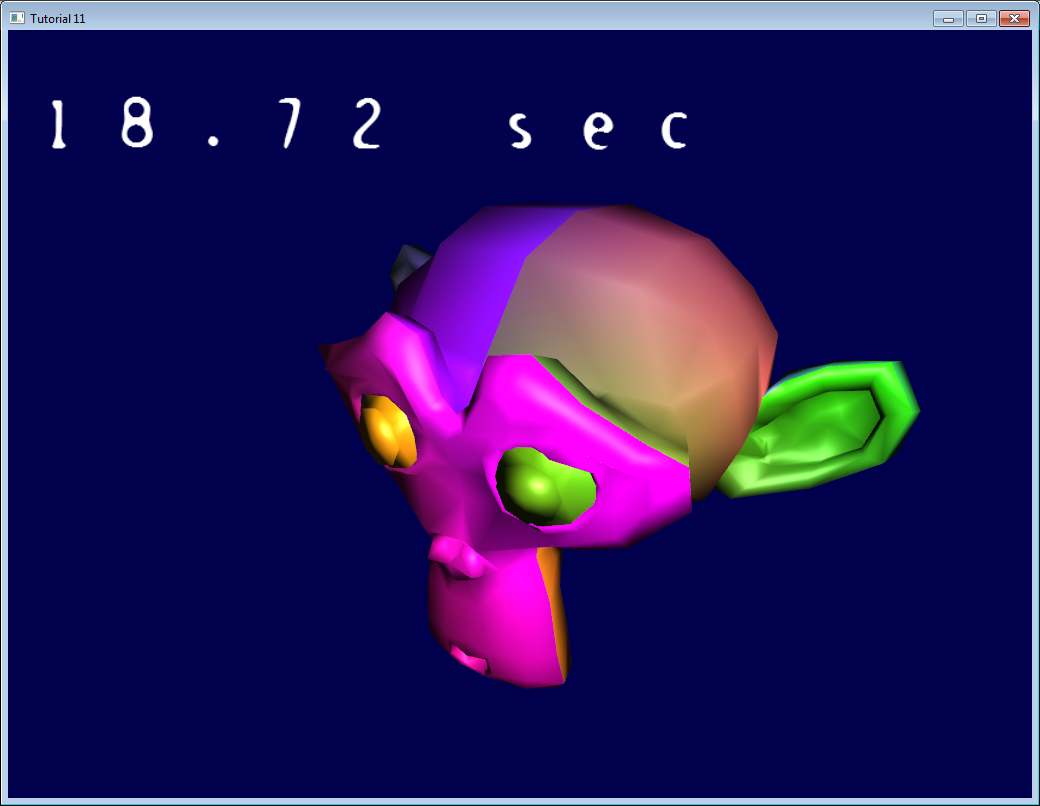 For some reason Suzanne is missing for me, but the time counter works fine: https://github.com/opengl-tutorials/ogl/issues/15

TrueType raster. By NVIDIA employee. Aims for reusability. Haven't tried it yet.

http://malideveloper.arm.com/resources/sample-code/simple-text-rendering/ seems to encode all characters on a PNG, and cut them from there.

Lives in a separate tree to SDL, and integrates easily.

Does not provide a texture atlas implementation however, so performance will be limited: How to render fonts and text with SDL2 efficiently?

Drawing text in plain OpenGL isn't a straigth-forward task. You should probably have a look at libraries for doing this (either by using a library or as an example implementation).

Note that bitmaps are not the only way of achieving text in OpenGL as mentioned in the font survey. 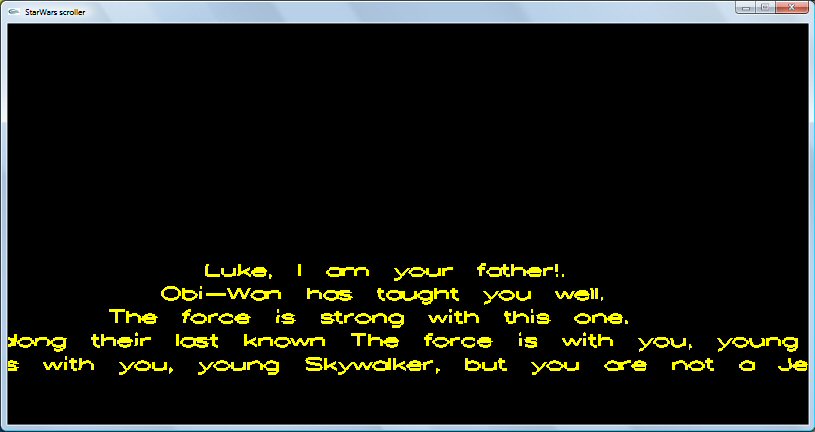 An example: A STAR WARS SCROLLER.

This article describes how to render text in OpenGL using various techniques.

With only using opengl, there are several ways:

Load an image with characters as texture and draw the part of that texture depending on what character you want. You can create that texture using a paint program, hardcode it or use a window component to draw to an image and retrieve that image for an exact copy of system fonts.

No need to use Glut or any other extension, just basic OpenGL operability. It gets the job done, not to mention that its been done like this for decades by professional programmers in very succesfull games and other applications.

I think that the best solution for drawing text in OpenGL is texture fonts, I work with them for a long time. They are flexible, fast and nice looking (with some rear exceptions). I use special program for converting font files (.ttf for example) to texture, which is saved to file of some internal "font" format (I've developed format and program based on http://content.gpwiki.org/index.php/OpenGL:Tutorials:Font_System though my version went rather far from the original supporting Unicode and so on). When starting the main app, fonts are loaded from this "internal" format. Look link above for more information.

With such approach the main app doesn't use any special libraries like FreeType, which is undesirable for me also. Text is being drawn using standard OpenGL functions.

Not the answer you're looking for? Browse other questions tagged c++ c opengl graphics or ask your own question.

2502
How do you set, clear, and toggle a single bit?
2936
How do I iterate over the words of a string?
1712
Why can templates only be implemented in the header file?
2915
Improve INSERT-per-second performance of SQLite?
6
Drawing large numbers of pixels in OpenGL
77
Drawing Sphere in OpenGL without using gluSphere()?
1621
Image Processing: Algorithm Improvement for 'Coca-Cola Can' Recognition
1398
Replacing a 32-bit loop counter with 64-bit introduces crazy performance deviations with _mm_popcnt_u64 on Intel CPUs
0
What's the best way to render a lot of text with OpenGL