How do I get a lognormal distribution in Python with Mu and Sigma?

I have been trying to get the result of a lognormal distribution using Scipy. I already have the Mu and Sigma, so I don't need to do any other prep work. If I need to be more specific (and I am trying to be with my limited knowledge of stats), I would say that I am looking for the cumulative function (cdf under Scipy). The problem is that I can't figure out how to do this with just the mean and standard deviation on a scale of 0-1 (ie the answer returned should be something from 0-1). I'm also not sure which method from dist, I should be using to get the answer. I've tried reading the documentation and looking through SO, but the relevant questions (like this and this) didn't seem to provide the answers I was looking for.

Here is a code sample of what I am working with. Thanks.

So after a bit of work and a little research, I got a little further. But I still am getting the wrong answer. The new code is below. According to R and Excel, the result should be .7434, but that's clearly not what is happening. Is there a logic flaw I am missing?

It sounds like you want to instantiate a "frozen" distribution from known parameters. In your example, you could do something like:

which will give you a lognorm distribution object with the mean and standard deviation you specify. You can then get the pdf or cdf like this: 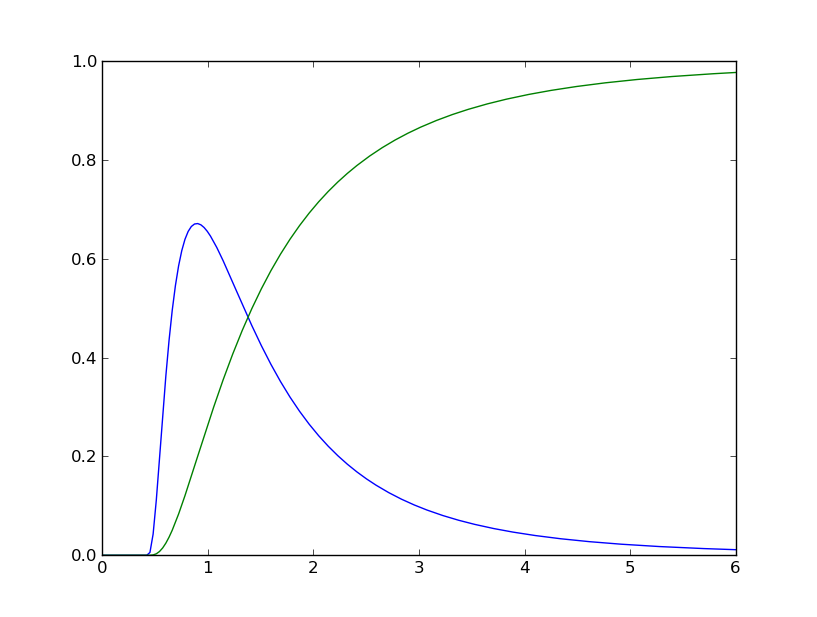 Is this what you had in mind?

I know this is a bit late (almost one year!) but I've been doing some research on the lognorm function in scipy.stats. A lot of folks seem confused about the input parameters, so I hope to help these people out. The example above is almost correct, but I found it strange to set the mean to the location ("loc") parameter - this signals that the cdf or pdf doesn't 'take off' until the value is greater than the mean. Also, the mean and standard deviation arguments should be in the form exp(Ln(mean)) and Ln(StdDev), respectively.

Simply put, the arguments are (x, shape, loc, scale), with the parameter definitions below:

loc - No equivalent, this gets subtracted from your data so that 0 becomes the infimum of the range of the data.

shape - the standard deviation of the log of the variate.

I went through the same frustration as most people with this function, so I'm sharing my solution. Just be careful because the explanations aren't very clear without a compendium of resources.

For more information, I found these sources helpful:

And here is an example, taken from @serv-inc 's answer, posted on this page here:

Similar to Excel and R, The lognorm_cdf function above parameterizes the CDF for the log-normal distribution using mu and sigma.

Although SciPy uses shape, loc and scale parameters to characterize its probability distributions, for the log-normal distribution I find it slightly easier to think of these parameters at the variable level rather than at the distribution level. Here's what I mean...

which is the same as:

This can be sneakily re-written as follows:

If you can't visualize that very clearly, let's rewrite Equation 2 as a function: 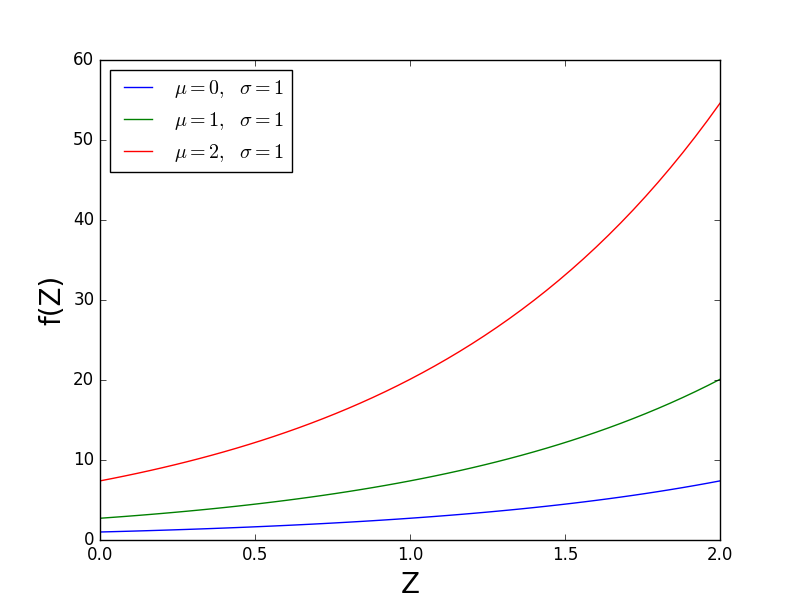 The next figure holds mu constant and varies sigma. You should see that the shape of f(Z) changes. That is, f(Z) has a constant value when Z=0 and sigma affects how quickly f(Z) curves away from the horizontal axis. Hence SciPy's "shape" is sigma. 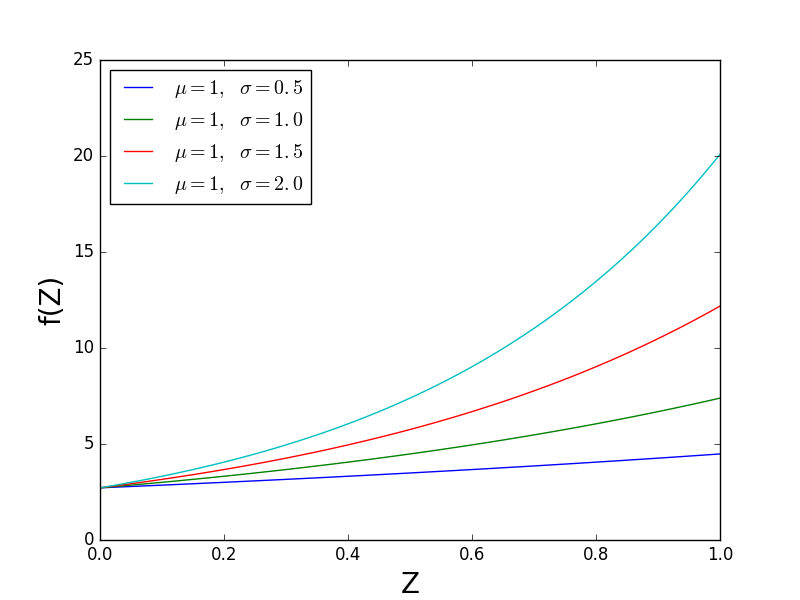 Even more late, but in case it's helpful to anyone else: I found that the Excel's

provides the same results as python's

@lucas' answer has the usage down pat. As a code example, you could use

If you read this and just want a function with the behaviour similar to lnorm in R. Well, then relieve yourself from violent anger and use numpy's numpy.random.lognormal.

Not the answer you're looking for? Browse other questions tagged python statistics scipy or ask your own question.