We're working on a very large .NET WinForms composite application - not CAB, but a similar home grown framework. We're running in a Citrix and RDP environment running on Windows Server 2003.

We're starting to run into random and difficult to reproduct "Error creating window handle" error that seems to be an old fashion handle leak in our application. We're making heavy use of 3rd Party controls (Janus GridEX, Infralution VirtualTree, and .NET Magic docking) and we do a lot of dynamic loading and rendering of content based on metadata in our database.

There's a lot of info on Google about this error, but not a lot of solid guidance about how to avoid issues in this area.

Does the stackoverflow community have any good guidance for me for building handle-friendly winforms apps?

I have tracked down a lot of issues with UIs not unloading as expected in WinForms.

Here are some general hints:

I had this error when I subclassed NativeWindow and called CreateHandler manually. The problem was I forgot to add base.WndProc(m) in my overriden version of WndProc. It caused the same error

The easiest way to work out what is creating so many handles is to have TaskMgr.exe open. In TaskMgr.exe you need to have the USER Object, GDI Object and Handles columns visible as shown, to do this choose View Menu > Select Columns: 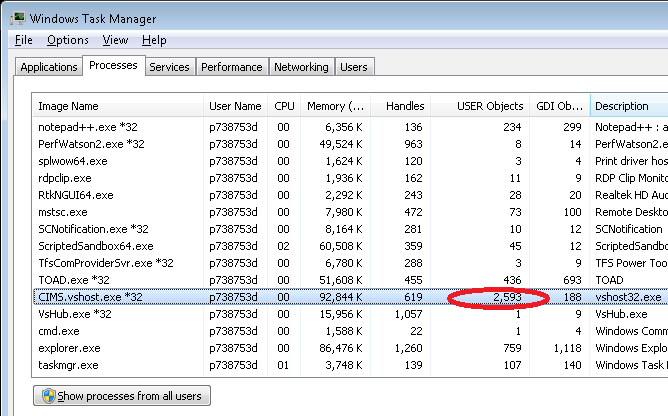 Go through the steps to cause the problem and watch the USER Object count increase to around 10,000 or GDI Objects or Handles reach their limits.

When you see the Object or Handles increase (typically dramatically) you can halt the code execution in Visual Studio by clicking the Pause button.

Then just hold down F10 or F11 to cruise through the code watching when the Object/Handle counts increases dramatically.

The best tool I have found so far is GDIView from NirSoft, it breaks up the GDI Handle fields:

I tracked it down to this code used when setting DataGridViews Column Widths:

This is the stack trace:

Here is the crux of a helpful article by Fabrice that helped me work out the limits:

Aside from the fact that the application consumes too much resources, which is a separate issue altogether that we are already addressing, we had difficulties with determining what resources were getting exhausted as well as what the limits are for these resources. We first thought about keeping an eye on the Handles counter in the Windows Task Manager. That was because we noticed that some processes tended to consume more of these resources than they normally should. However, this counter is not the good one because it keeps track of resources such as files, sockets, processes and threads. These resources are named Kernel Objects.

The other kinds of resources that we should keep an eye on are the GDI Objects and the User Objects. You can get an overview of the three categories of resources on MSDN.

We tried to determine what the limit is in terms of User Objects an application can use. There is a quota of 10,000 user handles per process. This value can be changed in the registry, however this limit was not the real show-stopper in our case. The other limit is 66,536 user handles per Windows session. This limit is theoretical. In practice, you'll notice that it can't be reached. In our case, we were getting the dreaded "Error creating window handle" exception before the total number of User Objects in the current session reached 11,000.

Desktop Heap
We then discovered which limit was the real culprit: it was the "Desktop Heap". By default, all the graphical applications of an interactive user session execute in what is named a "desktop". The resources allocated to such a desktop are limited (but configurable).

Note: User Objects are what consumes most of the Desktop Heap's memory space. This includes windows. For more information about the Desktop Heap, you can refer to the very good articles published on the NTDebugging MSDN blog:

What's the real solution? Be green!
Increasing the Desktop Heap is an effective solution, but that's not the ultimate one. The real solution is to consume less resources (less window handles in our case). I can guess how disappointed you can be with this solution. Is this really all what I can come up with?? Well, there is no big secret here. The only way out is to be lean. Having less complicated UIs is a good start. It's good for resources, it's good for usability too. The next step is to avoid waste, to preserve resources, and to recycle them!

Here is how we're doing this in my client's application:

We use TabControls and we create the content of each tab on the fly, when it becomes visible; We use expandable/collapsible regions, and again fill them with controls and data only when needed; We release resources as soon as possible (using the Dispose method). When a region is collapsed, it's possible to clear it's child controls. The same for a tab when it becomes hidden; We use the MVP design pattern, which helps in making the above possible because it separates data from views; We use layout engines, the standard FlowLayoutPanel and TableLayoutPanel ones, or custom ones, instead of creating deep hierarchies of nested panels, GroupBoxes and Splitters (an empty splitter itself consumes three window handles...). The above are just hints at what you can do if you need to build rich Windows Forms screens. There's not doubt that you can find other approaches. The first thing you should do in my opinion is building your applications around use cases and scenarios. This helps in displaying only what's needed at a given time, and for a given user.

Of course, another solution would be to use a system that doesn't rely on handles... WPF anyone?

I met this exception because endless loop creating new UI control and set its properties. After looped many times, this excption was thrown when change control visible property. I found both User Object and GDI Object (From Task Manager) are quite large.

I guess your issue is similar reason that system resources are exhaust by those UI controls.

I am using the Janus Controls at work. They are extremely buggy as far as disposing of themselves go. I would recommend that you make sure that they are getting disposed of correctly. Also, the binding with them sometimes doesn't release, so you have to manually unbind the object to dispose of the control.

I ran into the same .Net runtime error but my solution was different.

My Scenario: From a popup Dialog that returned a DialogResult, the user would click a button to send an email message. I added a thread so the UI didn't lock up while generating the report in the background. This scenario ended up getting that unusual error message.

The code that resulted in problem: The problem with this code is that the thread immediately starts and returns which results in the DialogResult being returned which disposes the dialog before the thread can properly grab the values from the fields.

The fix for this scenario: The fix is to grab and store the values before passing them into the method which creates the thread.

same error occured when i started using threading in my WinForm App, i used stack trace to find what is throwing error and found out UltraDesktopAlert component of infragistics was behind this so i invoked it differently and error is now gone.

also i was unable to use GDI utility to find how many handle my app creates but my app (64bit) was not available in its list. another solution was to change desktop heap value to SharedSection=1024,20480,768 at following location HKEY

but mine was already with same values. only invoke method delegate worked for me. hope this helped.

In my case I was overriding WndProc(ref Message m) but not calling base.WndProc(ref m);

Not the answer you're looking for? Browse other questions tagged .net winforms handles or ask your own question.

67
Winforms issue - Error creating window handle
14
System.Drawing Out of Memory Exception On Main() Method - C#
1
User Activity Logging, Telemetry (and Variables in Global Exception Handlers)
0
strange exception which appears once in a while, could not reproduce the steps on WinForms UI
0
How to get rid of that “Creating handle on Window Error ” when adding new textBox to the form Dynamically
0
Error creating window handle #2