Somehow Visual Studio search has stopped working for me. Anytime I search "Entire Solution" for some text I get this result:

Find all "[Whatever I was searching for]", Subfolders, Find Results 1, "Entire Solution" No matching text found to look in. Find was stopped in progress.

Why does it suddenly say "No files were found to look in"?

I've found a number of links on Google that say to press Ctrl + Break or Ctrl + Scroll Lock, but none of them seem to work for me.

I get that problem once in a while. One seemingly nonsensical solution I've found is to click inside the Find Results window (not the Output window). Once the blinking text cursor is visible, hit Ctrl+Break four or five times. This seems to "unblock" whatever causes the problem.

There are reports Ctrl + ScrLk may need to be used instead of Ctrl+Break . If these doesn't work then try Break alone.

Note from Codeguard: I have found an explanation and deterministic solution to this problem

This is neither Visual Studio nor Windows related bug. In fact, the bug is in your keyboard! Many keyboards from different vendors have been reported to be buggy.

If you press Ctrl+Break and release Ctrl first, then Break gets stuck on a buggy keyboard. If you ever pressed Ctrl+Break the "wrong" way, you will have this problem with search being interrupted.

According to scan code specifications, Break and Ctrl+Break are special. They send "make" (press) AND "break" (release) scan codes the moment you press Break. They send nothing when you release Break. The buggy keyboard will send the following sequence:

That is, Ctrl+Break is never released, but instead Pause is released.

You could for example use old good Spy++ from Visual Studio tools. Attach it to anything, for example Windows notepad, and monitor messages (I suggest that you select only keyboard messages). Press Ctrl+Break, releasing Ctrl first. Check the output from Spy++. You will see the sequence I shown in Details section.

I have tried two different keyboards on the same computer. Logitech K120 has the bug while some other Mitsumi keyboard behaves according to specifications and does not have the bug.

If you think about it, it's easy to understand that correct behavior needs special case handling, while buggy behavior is naive. This is why many different keyboards can be buggy.

You simply need to press Ctrl+Break, paying attention to releasing Break first. It doesn't matter which application is active.

This bug has been in Visual Studio a long time and it never seems to get fixed.

The Connect item has been marked as Closed - Won't Fix: https://connect.microsoft.com/VisualStudio/feedback/details/718217/find-was-stopped-in-progress-while-performing-search-in-visual-studio

Ctrl+Break or Ctrl+ScrLk cancel a find operation. Try it. What has happened is that some software layer (presumably Windows) thinks those keys are still being pressed even though they are not. Pressing and releasing them clears the flag.

It could be any of these combinations:

Remember that you have multiple control and alt keys on your keyboard -- try it with each of them. If it's the right Ctrl key + ScrLk, pressing the left Ctrl is not going to resolve the issue.

Here is the Connect issue which Microsoft closed as "Won't Fix".

If this is a recurring problem for you, there is a Visual Studio extension that suppresses the virtual key that causes the problem.

My friend told me going to:

In my case I had a bogus character in the "Look at these file types:" field in the search window.

Removing the character solved the problem. 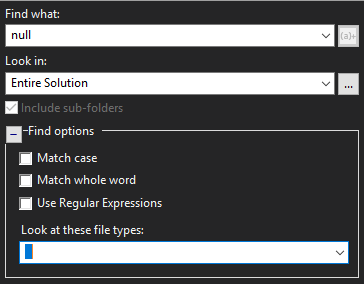 Search solution in Visual Studio 2012 is broke. I tested this on three machines, did not work on two. What I found which does work is click on drop down arrow next to search field and select Find all. This is a bit of pain because you have to select drop down every time you search in solution.

I tried all the previous options. They didn't work for me, but reading them made me sure that this is a bug, and I will have to try some unknown ways to get it working. So, I tried a simple file search in Visual Studio 2010 in:

Both of which worked.

Then I tried Find in Files and woah! It started working.

Unfortunately none of these special key strokes work for me. Only restarting Visual Studio 2010 seems to work for me.

I had the same problem in Visual Studio 2013 (Update 3). None of the key combinations listed previously worked for me. I had *.cs selected in the FileTypes.

I have been using Visual Studio 13 without this problem for couple of years now and I started having this issue after applying Update 5 or it could be a weird keys combo pressed by me unknowingly which triggered it, I don't know for sure.

Echelon_Force's solution worked for me. Thanks!

All of the combinations of Scroll Lock and Break didn't do anything for me. As a workaround, I added the solution directory to the Search Folders (the second ellipsis button), then changed the Look In field to the solution directory. The root problem still exists, but for me, this is functionally the same thing.

I was using Visual Studio 2022 (tried with both professional and community, V 17.2.5), my search function was not working in Find in All Files, so I browsed to my solution folder, under .vs\{ProjectName} folder, there is another folder with name FileContentIndex. After closing visual studio and deleting this folder, and restarting vs, seemed to solve my problems, and my Find in All Files started functioning correctly.

I had the same problem as glenneroo today, after updating Visual Studio 2019 to 16.4.3. Found a solution that worked for me here.

Open Find Options and check if there is a (special) character in the Look at these file types text field. If so, remove it.

This works for me after everything else didn't or worked only sometimes:

Do the search, and while searching, hold CRTL all the time and keep pressing Break.

If you are searching for multiple file types, they must be separated with a ; character, not a space.

This returns the correct results:

This returns nothing at all:

This isn't the problem the original poster, but for other people who can't figure out why their search isn't working, this could be the reason.

Another late-to-the-party answer, but I found yet another "solution" for this problem.

When it looks as if the Visual Studio app has frozen on search...leave it alone. Don't close it. Don't restart it. Just let it go for about 10-15 minutes and the problem may correct itself, as it did in my specific case. I'm not sure as to why leaving it alone solved the problem, although my wholly uneducated guess is that Visual Studio is building some sort of an index to be able to search files and running into a snag. Once the 10-15 minutes are up and VS completes its search, it seems fine after that.

Probably won't apply to most situations, but what fixed it for me was turning off 'Use Regular Expressions' in the search window. I had previously been using Regular Expressions for some tricky replacements and didn't turn off when finished. I think perhaps it was interpreting part of simple replace text (see below - had some special characters) as the start of an incomplete or malformed regular expression, and so couldn't actually do any matching. Would be nice if it told you! 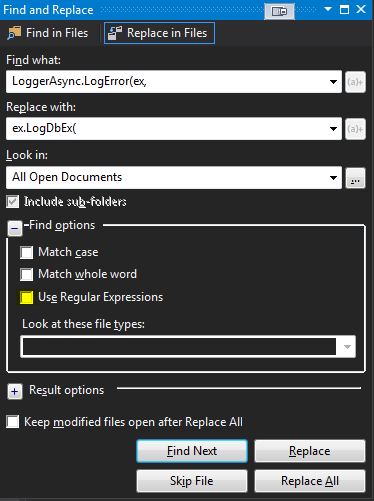 That Ctrl+Break trick worked for me for years, it's really interesting to finally understand why this happens. With VS2015 I have somewhat related problem with search: my Ctrl+Shift+F simply does not work, this key combination seems to be ignored when I press it. I tried to reinstall even VS 2015 and I still got that same broken behavior.

In case somebody has identical problem, here's what was the reason:

I turns out that for whatever random reason VS2015 shows that "find in files" dialog on another monitor that's attached to my PC. That other monitor is 4K Samsung TV that normally stays "Off" and I have no clue why VS 2015 sends that search dialog box to that monitor. Surprisingly, when I turn on my TV the search dialog moves to the primary monitor on its own!

Nothing worked for me. I use also Resharper. So I had to reset my VS key bindings and reapply Resharper shortcuts. Only this got me it working.

I am running Visual Studio 2012 Professional in a Virtual Machine, connecting using rdesktop from a Linux machine.

None of the other suggestions worked, but solved the problem was:

Tried all the solution, but the fixed of mine was I accidently change to another language keyboard on my windows, after I change back to English keyboard, it work, finally I can ctrl + shirt + f

I'm currently using VS2019 16.7.7, and, if I try to find something in the whole solution, VS never finds all the occurrences, sometimes only one, or none.

In some recent release of VS2019 (perhaps 16.5 or 16.6) the old "Find and replace" dialog was replaced by a new "Find in files" dialog, and this new one is failing for me. One solution that worked for me was to disable the new "Find in files" and keep using the old "Find and replace" dialog by checking Use previous Find In Files in Tools > Options > Environment > Preview features.

However, I observed that this was only failing in one of my open Visual Studio instances, so I tried the simple "close VS and open it again", enabled the new "Find in files" functionality, and it started working.

The following worked for me. Visual Studio → menu Windows → Reset Window Panel. The resizing of Visual Studio made it to hide the option.

This was one of my biggest problems with Visual Studio. For me (Windows 10, Visual Studio 2015) the find in all files window got locked with a white-out, and guess what, hitting print screen solves it.

This has begun occurring for me with the update to Version 15.8.8 of Visual Studio. None of the above steps worked. There is no error. Just what appears to be a 'stuck' search.

I had recently installed ApexSQL Refactor 2018.03.0331. Uninstalling this did not resolve the issue and does not seems to be the cause. It seems to be related to Version 15.8.8 of Visual Studio update.

I completely uninstalled Visual Studio and reinstalled Version 15.8.8 again. The issue with Ctrl-Shift-F searching the Entire Solution is no longer an issue. Whatever caused the problem does resolve after uninstalling and installing.

I once again installed ApexSQL Refactor 2018.03.0331 and everything still works well.