Can prettify.js be extended to support Mathematica?

The mathematica.SE is currently in private beta and will open to the public in a few days. Stack Overflow and related sites use prettify.js, however Mathematica is not a supported language. It would be pretty awesome to have a custom highlighting script for our site, and I request the JavaScript and CSS community's help in developing a such a script and the accompanying CSS.

I've listed below a few basic requirements such that it captures most of the features of Mathematica's default highlighting scheme (ignoring stuff that only the internal parser would know). I've also named the colours generically – hexadecimal colour codes can be picked from the screenshots I've provided (further below). I've also added code samples to accompany the screenshots so that folks can test it out.

For all of the above, if they appear inside strings, they should be treated as such, i.e. "@~# should be highlighted in pink.

Here's a small example set, with a screenshot at the end showing how it looks in Mathematica:

Here's an example from this answer of mine that also indicates my point 2 in the "Additional nice to haves" section, i.e., lowercase stuff being highlighted in blue.

Also, you might notice some of the variables highlighted in orange – I purposefully didn't include that as a requirement, as I think that's going to be a lot harder to do without a parser that knows Mathematica.

Is this feasible? Too much? Too hard? Impossible?

Quite frankly, I don't know the answer to any of those. I just listed some basic features that everyone on mathematica.SE would love to have and some additional stuff that would be a cherry on the top. However, do let me know if these are too difficult to implement. We can work out a smaller subset of features.

In recognition of this help, you all have the Mathematica community's eternal gratitude and in addition, I'll award a 500 bounty to each person that contributes significantly to this (if it's done in parts by different folks) – I'll rely on your votes/comments/output on the answers to decide what's significant (perhaps more than one bounty to one person if they do all the work). Implementing the "Additional nice to haves" gets an automatic +500 regardless of previous bounties, so you can also build upon the work of others even if you don't do the first half. I might also periodically place smaller bounties to attract users who might not have seen this question, so if you happen to earn those bounties, they'll be in addition to the "bounty to reward an existing answer" which will be decided towards the end.

Lastly, I'm not in a hurry. So please take your time with this question. The bounty is always an option until it is implemented by SE (or if it has been determined that existing answers satisfy the requirements completely). Ideally, I'm hoping to get this implemented 2/3rs of our way into the beta, which is 2 months from now.

Since the Mathematica support for google-code-prettify was mainly developed for the new Mathematica.Stackexchange site, please see also the discussion here.

I have no deep knowledge of all of this, but there were times when I wrote a cweb plugin for Idea to have my code highlighted there. In an IDE all this is not a one step process. It is divided into several steps and each step has more highlighting-abilities. Let me explain this a bit to give later some reasons why some things are (imho) not possible for a code-highlighter we need here.

At first the code is split into tokens which are the single parts of a programming language. After this lexer you can categorize intervals of your code into e.g. whitespace, literal, string, comment, and so on. This lexer eats the source-code by testing regular expressions, storing the token-type for a text-span and stepping forward in the code.

After this lexical scan the source-code can be parsed by using the rules of the programming language, the tokens and the underlying code. For instance, if we have a token Plus which is of type Keyword then we know that the brackets and the parameter should follow. If not, the syntax is not correct. What you can build with this parsing is called an AST, abstract syntax tree, and looks basically like the TreeForm of Mathematica syntax.

With a nicely designed language, like Java for instance, it is possible to the check the code while typing and make it almost impossible to write syntactically wrong code.

First, the prettify.js implements only a lexical scanner, but no parser. I'm pretty sure, that this would be impossible anyway regarding the time-constrains for displaying a web-page. So let me explain what features are not possible/feasible with prettify.js:

Also, you might notice some of the variables highlighted in orange – I purposefully didn't include that as a requirement, as I think that's going to be a lot harder to do without a parser that knows Mathematica.

Right, because the highlighting of these variables depends on the context. You have to know, that you are inside a Table construct or something like that.

I think hacking an extension for prettify.js is not so hard. I'm an absolute regular expression noob, so be prepared of what follows.

We don't need so much stuff for a simple Mathematica lexer. We have whitespace, comments, string-literals, braces, a lot of operators, usual literals like variables and a giant list of keywords.

Lets start, with the keywords in java-script regexp-form:

The regular expression for whitespace and string-literals can be copied from another language. Comments are matched by something like

This runs wrong if we have comments inside comments, but for the moment I don't care. We have braces and brackets

We have something like blub_boing which should be matched separately.

We have variable names and other literals. They need to start with either a letter or $ and then can follow letters, numbers and $. Currently \[Gamma] is not matched as one literal but for the moment it's ok.

And we have operators (I'm not sure this list is complete).

I cleaned the stuff a bit up, did some debugging and created a color-style which looks beautiful to me. The following stuff works as far as I can see correctly: 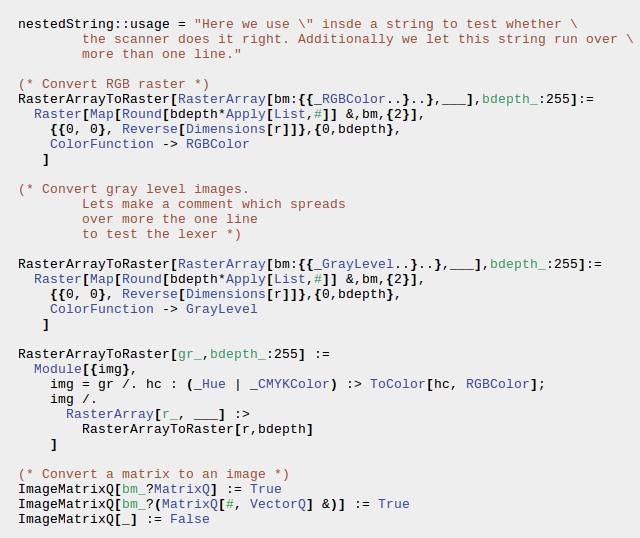 Szabolcs asked whether and how it is possible to test this. This is easy: You need my google-code-prettify source (Where can I put this, so that everyone has access?). Unpack the sources and open the file tests/mathematica_test.html in a webbrowser. This file loads by itself the files src/prettify.js, src/lang-mma.js and src/prettify-mma-1.css.

To test your own code, simply open mathematica_test.html in an editor and paste your stuff between the pre tags. Reload the page and your code should appear.

Debugging: If the highlighter is not working correctly, you can debug with an IDE or with Google-Chrome. In Chrome you mark the word where the highlighter starts to fail and make right-klick and Inspect Element. What you see then is the underlying html-highlight code. There you can see every single token and you see which type the token is. This looks then like

You see the open bracket is of type tag. This matches with the regexp definition I made in lang-mma.js. In Chrome it is even possible to browse the JS code, set breakpoints and debug it while reloading your page.

Tim Stone was so kind to write a script which injects the highlighter during the loading of sites under http://stackoverflow.com/questions/. As soon as google-code-prettify is turned on for mathematica.stackexchange.com it should work there too. I adapted this script to use my lexical scanning rules and colors. I heard that in Firefox the script is not always working, but this is how to install it:

Under https://github.com/halirutan/Mathematica-Source-Highlighting/raw/master/mathematica-source-highlighter.user.js you will always find the most recent version. Here is some change history.   - 02/23/2013 Updated the lists of symbols and keywords to Mathematica version 9.0.1 - 09/02/2012 some minor issues with the coloring of Mathematica-patterns were fixed. For a detailed overview of features with Pattern-operator : see also the discussion here

Not exactly what you are asking for, but I created a similar extension for MATLAB (based on the excellent work already done here). The project is hosted on github.

The script should solve some of the issues common for MATLAB code on Stack Overflow:

Keep in mind the syntax highlighting is not perfect; among other things, it fails on nested block comments (I can live with that for now). As always, comments/fixes/issues are welcome.

A separate userscript is included, it allows switching the language used as seen in the screenshot below: 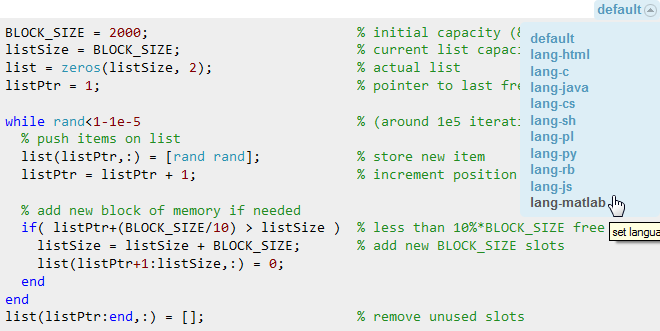 Install the userscript for SO directly from:

3
Optimizing a "Manipulate" in Mathematica

3593
How can I check for an empty/undefined/null string in JavaScript?
3080
How can I upload files asynchronously with jQuery?
3013
How can I merge properties of two JavaScript objects dynamically?
3185
How can I change an element's class with JavaScript?
3171
How can I convert a string to boolean in JavaScript?
2602
How can I transition height: 0; to height: auto; using CSS?
10600
How can I remove a specific item from an array?
1568
How do I find Waldo with Mathematica?