How do pointer-to-pointer's work in C? (and when might you use them?)

How do pointers-to-pointers work in C?
When might you use them?

Let's assume an 8 bit computer with 8 bit addresses (and thus only 256 bytes of memory). This is part of that memory (the numbers at the top are the addresses):

What you can see here, is that at address 63 the string "hello" starts. So in this case, if this is the only occurrence of "hello" in memory then,

... defines c to be a pointer to the (read-only) string "hello", and thus contains the value 63. c must itself be stored somewhere: in the example above at location 58. Of course we can not only point to characters, but also to other pointers. E.g.:

Now cp points to c, that is, it contains the address of c (which is 58). We can go even further. Consider:

Now cpp stores the address of cp. So it has value 55 (based on the example above), and you guessed it: it is itself stored at address 60.

As to why one uses pointers to pointers:

First a pointer is a variable, like any other variable, but that holds the address of a variable.

A pointer to a pointer is a variable, like any other variable, but that holds the address of a variable. That variable just happens to be a pointer.

When would you use them?

You can use them when you need to return a pointer to some memory on the heap, but not using the return value.

Here is an example of a pointer to a 2 dimensional array done properly:

I actually wish more people understood the really core low-level kind of coding. Not big, complex stuff like the lockless name lookup, but simply good use of pointers-to-pointers etc.
For example, I've seen too many people who delete a singly-linked list entry by keeping track of the "prev" entry, and then to delete the entry, doing something like:

and whenever I see code like that, I just go "This person doesn't understand pointers". And it's sadly quite common.

People who understand pointers just use a "pointer to the entry pointer", and initialize that with the address of the list_head. And then as they traverse the list, they can remove the entry without using any conditionals, by just doing a

Applying that simplification lets us lose 7 lines from this function even while adding 2 lines of comment.

Chris points out in the comments to the 2016 video "Linus Torvalds's Double Pointer Problem".

kumar points out in the comments the blog post "Linus on Understanding Pointers", where Grisha Trubetskoy explains:

You need to iterate over it from the beginning to end and remove a specific element whose value equals the value of to_remove.
The more obvious way to do this would be:

What we are doing above is:

There is a special case above - at the beginning of the iteration there is no previous entry (prev is NULL), and so to remove the first entry in the list you have to modify head itself (line 9).

What Linus was saying is that the above code could be simplified by making the previous element a pointer to a pointer rather than just a pointer.
The code then looks like this:

The above code is very similar to the previous variant, but notice how we no longer need to watch for the special case of the first element of the list, since pp is not NULL at the beginning. Simple and clever.

Also, someone in that thread commented that the reason this is better is because *pp = entry->next is atomic. It is most certainly NOT atomic.
The above expression contains two dereference operators (* and ->) and one assignment, and neither of those three things is atomic.
This is a common misconception, but alas pretty much nothing in C should ever be assumed to be atomic (including the ++ and -- operators)!

When covering pointers on a programming course at university, we were given two hints as to how to begin learning about them. The first was to view Pointer Fun With Binky. The second was to think about the Haddocks' Eyes passage from Lewis Carroll's Through the Looking-Glass

“You are sad,” the Knight said in an anxious tone: “Let me sing you a song to comfort you.”

“Is it very long?” Alice asked, for she had heard a good deal of poetry that day.

“It's long,” said the Knight, “but it's very, very beautiful. Everybody that hears me sing it - either it brings the tears to their eyes, or else -”

“Or else what?” said Alice, for the Knight had made a sudden pause.

“Or else it doesn't, you know. The name of the song is called ‘Haddocks' Eyes.’”

“Oh, that's the name of the song, is it?" Alice said, trying to feel interested.

“No, you don't understand,” the Knight said, looking a little vexed. “That's what the name is called. The name really is ‘The Aged Aged Man.’”

“Then I ought to have said ‘That's what the song is called’?” Alice corrected herself.

“No, you oughtn't: that's quite another thing! The song is called ‘Ways And Means’: but that's only what it's called, you know!”

“Well, what is the song, then?” said Alice, who was by this time completely bewildered.

“I was coming to that,” the Knight said. “The song really is ‘A-sitting On A Gate’: and the tune's my own invention.”

Consider the below figure and program to understand this concept better.

As per the figure, ptr1 is a single pointer which is having address of variable num.

Similarly ptr2 is a pointer to pointer(double pointer) which is having the address of pointer ptr1.

Values from above diagram :

A pointer to a pointer is also called a handle. One usage for it is often when an object can be moved in memory or removed. One is often responsible to lock and unlock the usage of the object so it will not be moved when accessing it.

A pointer-to-a-pointer is used when a reference to a pointer is required. For example, when you wish to modify the value (address pointed to) of a pointer variable declared in a calling function's scope inside a called function.

If you pass a single pointer in as an argument, you will be modifying local copies of the pointer, not the original pointer in the calling scope. With a pointer to a pointer, you modify the latter.

it's a pointer to the pointer's address value. (that's terrible I know)

basically, it lets you pass a pointer to the value of the address of another pointer, so you can modify where another pointer is pointing from a sub function, like:

You have a variable that contains an address of something. That's a pointer.

Then you have another variable that contains the address of the first variable. That's a pointer to pointer.

A meaningfull example of someType** is a bidimensional array: you have one array, filled with pointers to other arrays, so when you write

you access at the array that contains pointers to other arrays in his 5th position, get the pointer (let fpointer his name) and then access the 6th element of the array referenced to that array (so, fpointer[6]).

How it works: It is a variable that can store another pointer.

When would you use them : Many uses one of them is if your function wants to construct an array and return it to the caller. 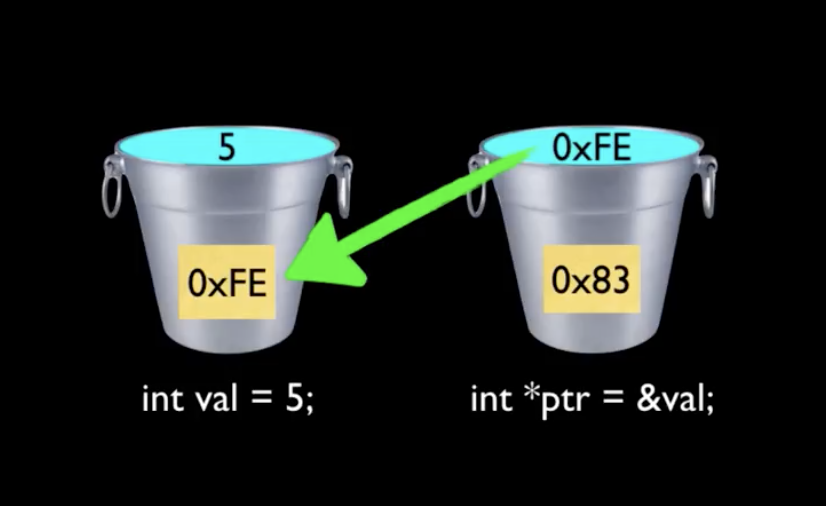 There so many of the useful explanations, but I didnt found just a short description, so..

Basically pointer is address of the variable. Short summary code:

And I am not so sure, when can be pointers useful, but in common it is necessary to use them when you are doing some manual/dynamic memory allocation- malloc, calloc, etc.

So I hope it will also helps for clarify the problematic :)

38
What does ** do in C language?
7
Why and when is worth using pointer to pointer?
3
What's the meaning of “int * * k”?
2
what is the “pointer to a pointer” in c language?
2
what does char** mean in a c program, can someone please give a correct explanation
0
Need for a pointer to pointer
0
What does ** mean in C/C++?
-1
I need help to understand the syntax of pointers
-1
Double pointer on linked list in C
0
how to use pointer to a pointer
See more linked questions