I have a feeling that the title just might not be explanatory :)

Suppose that I have the following structure: 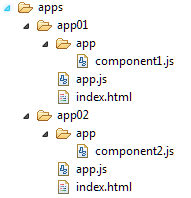 where app.js files are main bootstrapping/entry modules for the applications that look like this:

which both work with appropriate index.html files.

I have a RequireJS build configuration file (assume correct placement related to the paths) for app01:

Now I want to be able to run RequireJS build tool (using Google Closure with Rhino under Ant, not that it really matters in this case) for both app01 and app02 applications using the same build configuration file and, preferably, without actually listing all the apps by name (since the number and names may vary over time).

Basically I expect (or rather hope) to have something like this:

which would run over built_apps directory, find all apps under app*/app and optimize each one of them.

I know I can use Ant to create such build configuration file on the fly per app, run build against it and then clean up, but I'd rather have RequireJS solution.

Is there a way to do something like this with RequireJS?

There's no built-in wildcarding configuration for RequireJS. One way or another, you'll need code to do this. I'll observe that what you're asking for here amounts to translating a wildcard into some kind of implicit iteration on the module objects, akin to what mustache.js provides for its templates. IMO, that's a fairly brittle and limited approach in this context.

Instead, I recommend generating your modules array programmatically in JavaScript right in the build config. Recall, the build config is JavaScript not just a JSON data structure. This gives you sophisticated scripting capabilities there.

I've done this kind of scripting in the build config for the requirejs-rails gem. Here's an example gist that shows what r.js would see at build time.

Not the answer you're looking for? Browse other questions tagged javascript requirejs amd or ask your own question.

4
how to optimize project using requireJS if we have defined some maps in config?
6
RequireJS - Importing modules inside r.js optimized bundle
8
How Can I Place RequireJS Config in Separate File and Make the r.js Optimizer Work?
1
How to optimize a subset of JavaScript files created as RequireJS modules
0
Modules share the same url when only declared once in requirejs
1
Using requirejs and trying to optimize javascript into a vendor file and an app file
2
requirejs optimizer just define module name only
0
requirejs optimizer - how to change the optimized module name
1
RequireJS bundles config vs bundling with modules