Is it possible to target the line-break <br/> tag with CSS?

I would like to have a 1px dashed line every time there is a line-break. I am customising a site with my own CSS and cannot change the set HTML, otherwise I would use some other way.

I don't think it is possible but maybe there is a way someone knows about.

BR generates a line-break and it is only a line-break. As this element has no content, there are only few styles that make sense to apply on it, like clear or position. You can set BR's border but you won't see it as it has no visual dimension.

If you like to visually separate two sentences, then you probably want to use the horizontal ruler which is intended for this goal. Since you cannot change the markup, I'm afraid using only CSS you cannot achieve this.

It seems, it has been already discussed on other forums. Extract from Re: Setting the height of a BR element using CSS:

I also found a clarification in the CSS 1 specification (no higher level spec mentions it):

The current CSS1 properties and values cannot describe the behavior of the ‘BR’ element. In HTML, the ‘BR’ element specifies a line break between words. In effect, the element is replaced by a line break. Future versions of CSS may handle added and replaced content, but CSS1-based formatters must treat ‘BR’ specially.

Grant Wagner's tests show that there is no way to style BR as you can do with other elements. There is also a site online where you can test the results in your browser.

pelms made some further investigations, and pointed out that IE8 (on Win7) and Chrome 2/Safari 4b allows you to style BR somewhat. And indeed, I checked the IE demo page with IE Net Renderer's IE8 engine, and it worked.

Update 2 c69 made some further investigations, and it turns out you can style the marker for br quite heavily (though, not cross-browser), yet this will not affect the line-break itself, because it seem to belong to parent container.

Try the following, I put it together using Update 2 from another answer with high votes, and it worked perfectly for me:

There is one good reason you would need to style a <br> tag.

When it is part of code you don't want to (or can't) change and you want this particular <br> not to be displayed.

Can save a lot of time and sometimes your day.

For the benefit of any future visitors who may have missed my comments:

Also note that I tried a number of other things:

Not very useful when it is only supported in one browser, but I always find it interesting to see how different browsers implement the specification.

renders as below in IE8... not a lot of use in just one browser though.

gives a dashed line in Chrome 2 / Safari 4b but loses the line break which (unless anyone can come up with a way to reintroduce that) makes it less than useless.

I know you can't edit the HTML, but if you can modify the CSS, can you add javascript?

if so, you can include jquery, then you could do

The purpose of styling the <br> tag like this is to make a "bigger" line break (i.e., with a bit of extra space between the lines).

This is the result, displayed in Chrome v.76: 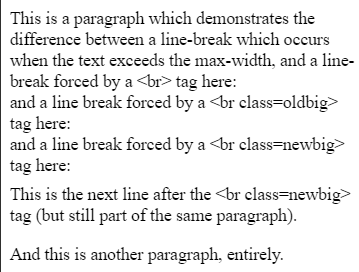 My own tests conclusively show that br tags do not like to be targeted for css.

But if you can add style then you can probably also add a scrip tag to the header of the page? Link to an external .js that does something like this:

So in short, it's not optimal, but here is my solution.

BR is an inline element, not a block element.

Otherwise, browsers that are a little pickier about such things will refuse to apply borders to your BR elements, since inline elements don't have borders, padding, or margins.

this seems to solve the problem:

old question but this is a pretty neat and clean fix, might come in use for people who are still wondering if it's possible :):

This will work, but only in IE. I tested it in IE8.

I placed a <br> tag into a <span> tag and was able to use display:none; on the <span> to control when not to use the <br> tag using Media Queries.

Why make simple things so difficult???? Why use
in the first place?

Isn't it just much easier to press enter/return while writing, and just start a new paragraph after each line of text?

You can still make it look like you used < /br> by limiting the padding and margins. Then set a bottom border style to the p selector in CSS.

If you want your last line of text not to have a dashed line under it, only in between the text lines (as a visual separation), simply add an id to the

tag of the last line of text only, and write the CSS for it.

Why not just use the HR tag? It's made exactly for what you want. Kinda like trying to make a fork for eating soup when there's a spoon right in front of you on the table.

Not the answer you're looking for? Browse other questions tagged html css line-breaks or ask your own question.

306
How to change the height of a <br>?
85
Change <br> height using CSS
45
Apply a class to a br tag?
31
Newline symbol unicode character
10
How to mark up multiple <br />?
13
"br" is not friendly with the flexbox?
9
remove multiple extra break tags with CSS
11
How to add an image in the end of every wrapped line?
6
css: how to make <br> not highlighted when selecting text (in Chrome)
5
styling the first line in the last paragraph using css
See more linked questions

3125
How can I change an element's class with JavaScript?
3542
Set cellpadding and cellspacing in CSS?
854
CSS 100% height with padding/margin
2430
How do I give text or an image a transparent background using CSS?
3694
Is there a CSS parent selector?
4200
Change a HTML5 input's placeholder color with CSS
2510
How can I transition height: 0; to height: auto; using CSS?
3023
Is it possible to apply CSS to half of a character?