I need to add a new MIME mapping for .woff file extensions to IIS Express.

If I add the following snippet to the "applicationhost.config" of IIS Express it works fine:

But I would actually like to do add it to my "web.config" so that not every developer would need to change their "applicationhost.config" locally.

So I removed it again from the "applicationhost.config" file and added the following snippet to the project's "web.config":

Unfortunately it doesn't seem to work that way because when I try to access a .woff file I end up with a HTTP 404.3 error.

Putting it in the "web.config" works fine. The problem was that I got the MIME type wrong. Instead of font/x-woff or font/x-font-woff it must be application/font-woff:

Spec is now a recommendation and the MIME type is officially: application/font-woff

If anybody encounters this with errors like Error: cannot add duplicate collection entry of type ‘mimeMap’ with unique key attribute and/or other scripts stop working when doing this fix, it might help to remove it first like this:

At least that solved my problem

I know this is an old question, but...

I was just noticing my instance of IISExpress wasn't serving woff files, so I wen't searching (Found this) and then found:

I suppose my install has support for SVG since I haven't had issue with that. But the instructions are trivially modifiable for woff:

Solved my problem, and I didn't have to mess with some crummy config (like I had to to add support for the PUT and DELETE verbs). Yay!

Thanks for this post. I got this worked for using mustache templates in my asp.net mvc project I used the following, and it worked for me.

I'm not using IIS Express but developing against my Local Full IIS 7.

So if anyone else get's here trying to do that, I had to add the mime type for woff via IIS Manager

To solve the problem, double-click the "MIME Types" configuration option while having IIS root node selected in the left panel and click "Add..." link in the Actions panel on the right. This will bring up the following dialog. Add .woff file extension and specify "application/x-font-woff" as the corresponding MIME type: 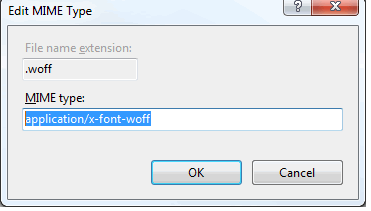 I was having a problem getting my ASP.NET 5.0/MVC 6 app to serve static binary file types or browse virtual directories. It looks like this is now done in Configure() at startup. See http://docs.asp.net/en/latest/fundamentals/static-files.html for a quick primer.

Not the answer you're looking for? Browse other questions tagged asp.net configuration mime-types iis-express or ask your own question.