I have pip installed matplotlib in my virtualenv and I am trying to plot a simple graph. I use Eclipse and PyDev. When I run the script from Eclipse it doesn't display any graph at all. I have tried the suggestions proposed in other questions such as adding plt.ion() but that doesn't work either. I have also tried the same code in the console and again nothing. Is this a problem with my configuration? If so how can I fix it?

The failing code is:

Your code works inside my virtualenv on OSX 10.7 with Python 2.7: 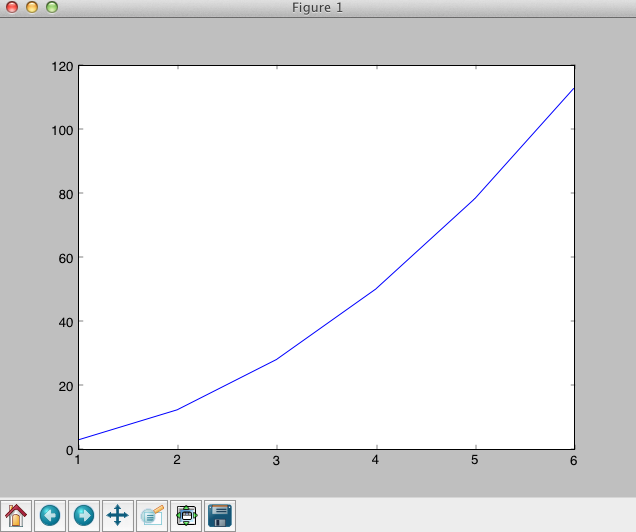 What version of Python are you using inside your virtualenv? My guess is that either you have not installed a matplotlib dependency or your installation of an installed dependency was not properly performed. On Python 2.7 here is what I did to install matplotlib. Can you try these steps in a new virtualenv and see if it works for you?

I had the same issue, and installing matplotlib using easy_install instead of pip did not solve it. In the end, I found out that the problem was simply that matplotlib could not find any backend for plotting.

I solved it by doing the following (I am using Debian wheezy):

To see what's going wrong, check out the matplotlib using git instead of either pip or easy_install. We're going to do a more manual install:

This will print out the configuration of what pip or easy_install would have done. Look through the "OPTIONAL BACKEND DEPENDENCIES" and make sure that some of the ones that produce windows are enabled (Tkinter, Gtk+, Mac OS X native, Qt, Cairo, etc.). If you see that none of these are available, then you need to install some of these libraries for your operating system before you continue installing matplotlib.

After installing say, Tk (on ubuntu: sudo apt-get install tcl-dev tk-dev), then when you re-run

you will see that the Tk backend is enabled. Proceeding with

should get you up and running... but at that point you might even just delete the whole git clone directory and go back to installing with pip.

This avoids many of the problems with getting matplotlib to work in the virtualenv but limits you to using the system version of matplotlib (which on this machine is not too bad).

This method also allows you to use the --no-site-packages, but still have matplotlib work for you.

By doing this you will install all the dependencies of the matplotlib:

To get the latest version of the matplotlib you can use:

Not the answer you're looking for? Browse other questions tagged python virtualenv matplotlib or ask your own question.

2757
How do you change the size of figures drawn with Matplotlib?
2064
How to leave/exit/deactivate a Python virtualenv
1398
Use different Python version with virtualenv
752
How to change the font size on a matplotlib plot
1457
Save plot to image file instead of displaying it using Matplotlib
768
How do I set the figure title and axes labels font size in Matplotlib?
910
How to make IPython notebook matplotlib plot inline
847
Using Python 3 in virtualenv
1615
What is the difference between venv, pyvenv, pyenv, virtualenv, virtualenvwrapper, pipenv, etc?
754
Purpose of "%matplotlib inline"