How do you force Internet Explorer to load the Adobe Flash Content Debugger?

I currently have the latest version of the IE Flash Player Installed: 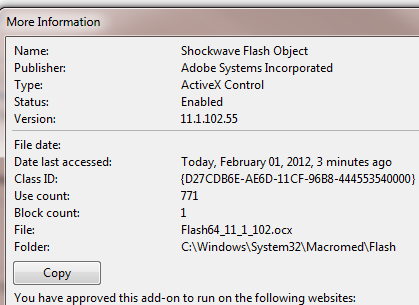 I've installed the latest version of the content debugger from The Adobe Flash Player Support Center.

Regardless of what I do IE doesn't seem to pick up the new content debugger version. I've tried uninstalling, tried installing an older version... All with no luck.

Just to make sure you have the right debugger version, it's the one labelled ActiveX control content debugger (for IE). Currently it's the first file under the Windows heading:

The version labelled Flash Player 11.2 Plugin content debugger (for Netscape-compatible browsers) is the one for Firefox. I think the other 2 versions are for standalone apps.

It seems that Adobe have changed the installer recently to allow having both versions, but it still reads the 64bit version in the registry, hence the popup.

If there is still a problem you may have to do things the old-fashioned way. This was a necessary workaround to have the older 32bit debugger and 64bit standard versions installed:

Rename the Windows\sysWOW64\Macromed\Flash\Flash11e.ocx file because file permissions will not let you overwrite it (you could 'take ownership' if you prefer)

Again you need to make sure that Flash Builder is using the 32bit version of Internet Explorer, as explained above.

The real problem ended up being I was executing ie64 which was only picking up the installed 64bit version and ignored my installation of the 32bit debugger.

I once had the same problem, and here is how I got it working...

I hope this works for you as it did for me!

Not the answer you're looking for? Browse other questions tagged flash internet-explorer or ask your own question.