How to force Firefox to open a file which does not have a .txt extension as if it did have one?

I have files which are just plain text, but have extension which is not .txt. Lets say the extension is .abc.

When I click on a link that points to such a file, such as file.abc, I'd like Firefox to open the file as if it was file.txt (i.e. open it inside Firefox, listed inside Firefox itself, just like what happens when I click on file.txt) instead of it asking how if I want to save it or open it, and then I have to go select the application to open it with, such Notepad or whatever.

I went to Tools → Options → Applications, but did not know what to do.

Added: Based on the comment below and the answer so far, it looks I did not explain myself well.

I want Firefox to open the file as if the file had .txt extension. When you click on a link in Firefox which has .txt, what does Firefox do? It does not open the file in Notepad or whatever, it opens right there, inside the browser, showing the listing of the file. I want to the same to happen when .abc extension.

I do not want to go around mess up with the Windows OS for this.

For a quick solution, you can add view-source: before the url. This also works in Chrome.

You should try this addon: Open in Browser.

It offers the possibility to display documents in the browser window. 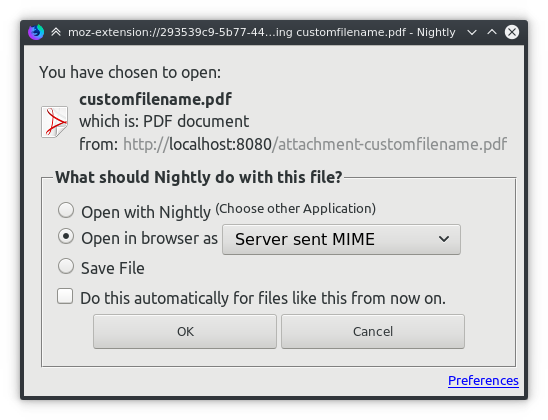 You can edit the mymeTypes.rdf in your Firefox profile (while Firefox is not running) to add extension-to-type mappings mapping the extensions in question to "text/plain". Unfortunately, Firefox has no user interface exposed for this operation....

I'd make a backup of the file before editing; the syntax is a bit finicky.

For reference, here is a relevant Firefox bug:

In the absence of appropriate interpretation software, it is reasonable to show subtypes of "text" to the user, while it is not reasonable to do so with most nontextual data.

Unless the user has associated it with an application, or elected to save it to disc by default, the browser should display arbitrary text/* types as text/plain.

And another bug linked to the above one:

It appears that there is no way to tell mozilla to display documents of type text/* (other than text/plain) to display right in the browser window. I would like to browse source code files (text/x-java, for example) right in the browser, but instead I am presented with an open-using/save panel. Neither of these two options is the desired choice. I could not find a way to tell mozilla to treat text/x-java the same way it treats text/plain.

Navigate to Control Panel\Programs\Default Programs\Set Default Programs (if you are on win7) and click on "choose default for this program" hopefully this should get you what you want. Thanks

You can see this in XP by opening Windows Explorer, clicking Tools, selecting Folder Options, then going to the tab marked File Types. This lets you change a file association to a different program

Not the answer you're looking for? Browse other questions tagged firefox or ask your own question.

58
How to use jQuery in Firefox Extension
2
Firefox: register protocol to open external editor and pass file correctly
12
How to access Firefox Extension I added in Selenium Webdriver?
1
File Download via Spring does not work in Firefox
0
how to open pdf file in firefox browsers window
0
How to build a Firefox extension that open like firebug
3
Local PHP file won't open in Firefox
1
telnet link does not open shell extension in firefox
0
firefox can not open remote file link