How is the std::tr1::shared_ptr implemented?

I've been thinking about using shared pointers, and I know how to implement one myself--Don't want to do it, so I'm trying std::tr1::shared_ptr,and I have couple of questions...

How is the reference counting implemented? Does it use a doubly linked list? (Btw, I've already googled, but I can't find anything reliable.)

shared_ptr must manage a reference counter and the carrying of a deleter functor that is deduced by the type of the object given at initialization.

The shared_ptr class typically hosts two members: a T* (that is returned by operator-> and dereferenced in operator*) and a aux* where aux is a inner abstract class that contains:

Such aux class (the actual name depends on the implementation) is derived by a family of templatized classes (parametrized on the type given by the explicit constructor, say U derived from T), that add:

A simplified sketch can be this one:

Where weak_ptr interoperability is required a second counter (weak_count) is required in aux (will be incremented / decremented by weak_ptr), and delete pa must happen only when both the counters reach zero.

How is the reference counting implemented?

A smart pointer implementation could be deconstructed, using policy-based class design1, into :

Reference counting tracks the number of smart pointers pointing to (owning2) the same object. When the number goes to zero, the pointee object is deleted3. The actual counter could be: 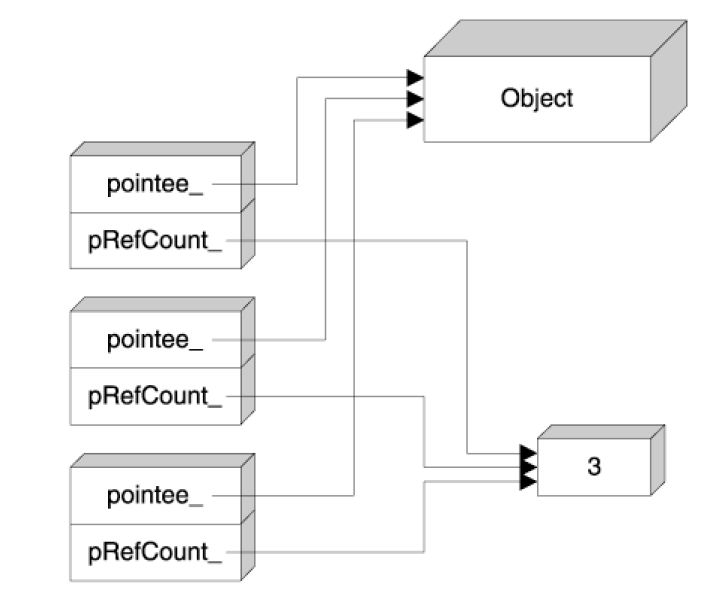 ...[1] relies on the observation that you don't really need the actual count of smart pointer objects pointing to one pointee object; you only need to detect when that count goes down to zero. This leads to the idea of keeping an "ownership list" : 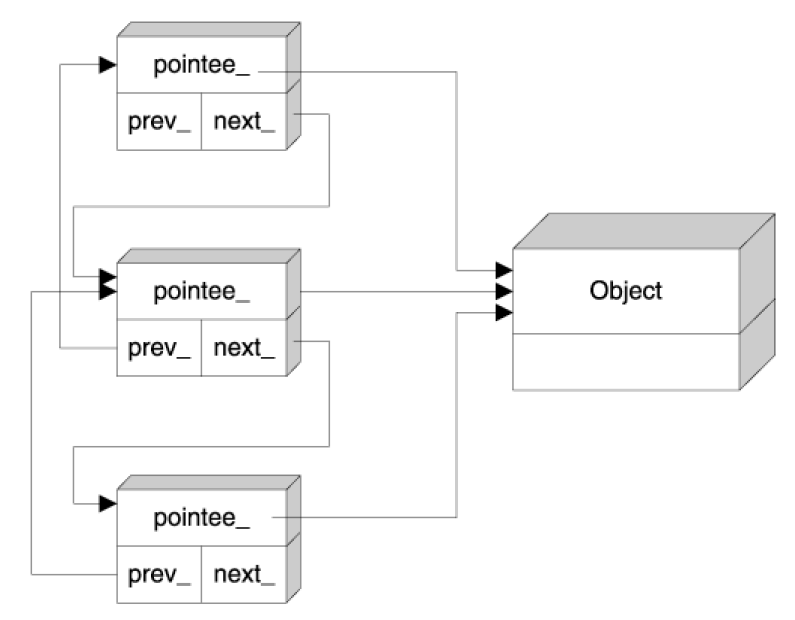 Regarding your second question:

All that I could find in the C++ standard was:

20.7.2.2.6 shared_ptr creation
...
7. [ Note: These functions will typically allocate more memory than sizeof(T) to allow for internal bookkeeping structures such as the reference counts. —end note ]

Which, in my opinion, excludes doubly linked lists, as they do not contain actual count.

Are there any pitfalls for using the std::shared_ptr?

Because the implementation of shared_ptr uses reference counting, cyclic references are potentially a problem. A cyclic shared_ptr chain can be broken by changing the code so that one of the references is a weak_ptr. This is done by assigning values between shared pointers and weak pointers, but a weak pointer doesn't affect the reference count. If the only pointers that point to an object are weak, the object is destroyed.

1. Each design feature with multiple implementations if formulated as policy.

2. Smart pointers similarly to pointers that point to object allocated with new, not only point to that object but also are responsible for its destruction and with the release of the memory it occupies.

3. With no further problems, if no other raw pointers are used and/or point to it.

If you want to see all the gory details, you can have a look at the boost shared_ptr implementation:

The reference counting seems to usually be implemented with a counter and platform specific atomic increment/decrement instructions or explicit locking with a mutex (see the atomic_count_*.hpp files in the detail namespace).

Yes, If you create cycles in your shared memory pointers, then the memory being managed by the smart pointer will not be recycled when the last pointer goes out of scope because there are still references to the pointer (i.e., the cycles cause the reference count to not go down to zero).

Now, even if shrd_ptr_1 and shrd_ptr_2 go out of scope, the memory they are managing is not reclaimed because the ptr member of each are pointing to each other. While this is a very naive example of such a memory cycle, it can, if you use these types of pointers without any discipline, occur in a much more nefarious and hard-to-track fashion. For instance, I could see where trying to implement a circular linked-list where each next pointer is a std::shared_ptr, if you're not too careful, could result in problems.

Not the answer you're looking for? Browse other questions tagged c++ shared-ptr tr1 or ask your own question.

47
How do shared pointers work?
74
How does weak_ptr work?
21
Variable Sized Struct C++
6
new and make_shared for shared pointers
9
x86/C++ - Pointer To Pointer: Const being violated by compiler?
3
Why std::shared_ptr control block need to hold a pointer to managed object with its correct type
1
Where is the reference count of an object typically stored?
1
How are self-destructing type erasure classes like std::function implemented?
1
avoid copying during array conversion between numpy and mxnet
0
Understanding how the strong reference count on shared pointers is increased?
See more linked questions

2882
What is the difference between #include <filename> and #include "filename"?
2987
How do I set, clear, and toggle a single bit?
3741
What are the differences between a pointer variable and a reference variable?
3450
What does the explicit keyword mean?
3273
How do I iterate over the words of a string?
4232
The Definitive C++ Book Guide and List
2111
Why can templates only be implemented in the header file?
3151
Why is "using namespace std;" considered bad practice?
2413
What is The Rule of Three?
0
Conventions for dealing with vectors of std::tr1::shared_ptr