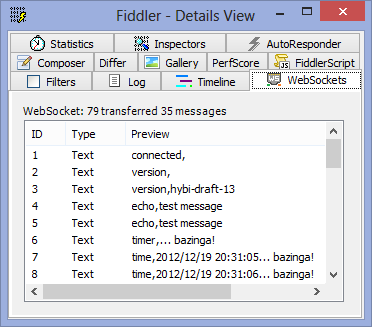 628
Differences between socket.io and websockets
245
Debugging WebSocket in Google Chrome
57
Chrome 59+ websocket frames no longer visible in DevTools
18
Debugging binary websockets frames
7
Monitoring secure web sockets (wss) with wireshark
5
How to find and replace a websocket?
2
Websockets not working
0
Is it possible to find out data in websocket using browser

616
How to debug JavaScript / jQuery event bindings with Firebug or similar tools?
2
Websocket version 8 Sec-WebSocket-Accept mismatch
6
Cannot get websocket connection to work in Chrome 19
415
WebSockets protocol vs HTTP
80
How WebSocket server handles multiple incoming connection requests?
0
How to Complete a WebSocket Handshake?
6
Django Channels. How to respond to a WebSocket open request with a subprotocol?
1
How to connect this websocket server
4
Client(JS-Browser) and Server(PHP) communication over IP through Web-Socket