How do I store and retrieve credentials from the Windows Vault credential manager?

I want to securely store a plaintext password on Windows PC. I am currently using DPAPI CryptProtectData to encrypt it, then store the encrypted blob in a file in user's local AppData.

In Windows 7, there is Windows Vault, a credential manager (Control Panel\User Accounts and Family Safety\Credential Manager) that stores logon data for a variety of logon types, including "generic credential". On the surface this looks like the right place for a program to store credentials. However, I was not able to find any API for it. I read Authentication function reference in MSDN, but frankly got lost in it.

Is there an API to Windows Vault to store and retrieve credentials from a program, and, if yes, where can I find documentation?

Many thanks to @Luke for the hint: Windows API functions to store credentials to and read them from Windows Vault are CredWrite() and CredRead(). Here is a code sample that may be compiled and run, that I used to confirm that these functions indeed do the expected thing:

A generic credential is stored in Windows Vault, as can be seen on the screenshot: 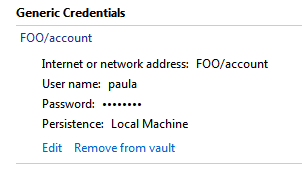 The answer appears to be quite popular, and is upvoted regularly for nearly 6 years since I wrote it. There were questions raised in the comments about the difference between storing credentials in the vault and encrypting a credential blob with the ::CryptProtectData() API and storing it whenever one pleases. Here's my understanding, possibly non-exhaustive, of the key differences.

In summary, Vault is a higher-level, narrowly-targeted API for keeping user-visible, user-managed credentials and other identity-related secrets, managed through the system UI. CryptProtectData() is a general use encryption API, with more flexibility and more code needed to be written and audited to manage persisted ciphertext safely.

The question which of the two is "more secure" is ill-posed. There is no definition of "more or less secure" that could apply to any use of encryption across the board.

For people joining the thread late, there is a new library to interact with this store in Windows 8 called: Windows.Security.Credentials.PasswordVault

In fact it only takes two lines of powershell to use the class to view all user names and passwords stored under the current users account:

Update: It looks like Microsoft (thankfully) restricted this api more in Windows 10 and it will no longer dump all your passwords so trivially. This is only indication of the change that I have seen:

The contents of the locker are specific to the app or service. Apps and services don't have access to credentials associated with other apps or services.

If anyone is interested in reading and writing to it from PowerShell or C#, here's a link to a script that does it:

The PowerShell script accesses the API via inline C# that utilizes Pinvoke.

kkm's answer shows how to create generic credential. If you need to create Windows credentials, you can modify several parameters. The specific code example is as follows, hoping to help.

Not the answer you're looking for? Browse other questions tagged security winapi authentication credentials dpapi or ask your own question.

1187
How does the SQL injection from the "Bobby Tables" XKCD comic work?
1
Using CredEnumerate to pull WebCredentials
3
Is there any more securely way to protect and store a password than Windows DPAPI do?
1
How to verify that PasswordVault encrypts the credentials on Windows Phone 8.1
0
How to protect secret from other programs in Windows
4
C++: How to programmatically create a local user logon credential in Windows Credential Manager so "runas /savecred" can use it?