What does FETCH_HEAD in Git mean?

In its default mode, git pull is shorthand for git fetch followed by git merge FETCH_HEAD.

What is this FETCH_HEAD and what is actually merged during git pull?

This is a bit like doing git fetch without arguments (or git remote update), updating all your remote branches, then running git merge origin/<branch>, but using FETCH_HEAD internally instead to refer to whatever single ref was fetched, instead of needing to name things.

The FETCH_HEAD is a reference to the tip of the last fetch, whether that fetch was initiated directly using the fetch command or as part of a pull. The current value of FETCH_HEAD is stored in the .git folder in a file named, you guessed it, FETCH_HEAD.

So if I issue:

If I have the remote repo configured as a remote tracking branch then I can follow my fetch with a merge of the tracking branch. If I don't I can merge the tip of the last fetch directly using FETCH_HEAD.

As mentioned in Jonathan's answer, FETCH_HEAD corresponds to the file .git/FETCH_HEAD. Typically, the file will look like this:

Note how all branches but one are marked not-for-merge. The odd one out is the branch that was checked out before the fetch. In summary: FETCH_HEAD essentially corresponds to the remote version of the branch that's currently checked out.

I have just discovered and used FETCH_HEAD. I wanted a local copy of some software from a server and I did

gitserver is the name of my machine that stores git repositories. release_1 is a tag for a version of the software. To my surprise, release_1 was then nowhere to be found on my local machine. I had to type

to complete the copy of the tagged chain of commits (release_1) from the remote repository to the local one. Fetch had found the remote tag, copied the commit to my local machine, had not created a local tag, but had set FETCH_HEAD to the value of the commit, so that I could find and use it. I then used FETCH_HEAD to create a local tag which matched the tag on the remote. That is a practical illustration of what FETCH_HEAD is and how it can be used, and might be useful to someone else wondering why git fetch doesn't do what you would naively expect.

i.e. to fetch release_1 and call it release_1 locally. (It is source:dest, see https://git-scm.com/book/en/v2/Git-Internals-The-Refspec; just in case you'd like to give it a different name!)

You might want to use FETCH_HEAD at times though:-

might be a nice way of using bug fix number 1234 from your Git server, and leaving Git's garbage collection to dispose of the copy from the server once the fix has been cherry-picked onto your current branch. (I am assuming that there is a nice clean tagged commit containing the whole of the bug fix on the server!)

git pull is combination of a fetch followed by a merge. When git fetch happens it notes the head commit of what it fetched in FETCH_HEAD (just a file by that name in .git) And these commits are then merged into your working directory.

FETCH_HEAD is a short-lived ref, to keep track of what has just been fetched from the remote repository.

If you run fetch but record the result in remote-tracking branches, and either if you do nothing with the fetched refs (e.g. you are merely mirroring) or if you always work from the remote-tracking refs (e.g. you fetch and then merge origin/branchname separately), you can get away with having no FETCH_HEAD at all.

Note that under "--dry-run" mode, FETCH_HEAD is never written; otherwise you'd see list of objects in the file that you do not actually have.

Write the list of remote refs fetched in the FETCH_HEAD file directly under $GIT_DIR.
This is the default.

Passing --no-write-fetch-head from the command line tells Git not to write the file.
Under --dry-run option, the file is never written.

Consider also, still with Git 2.29 (Q4 2020), the FETCH_HEAD is now always read from the filesystem regardless of the ref backend in use, as its format is much richer than the normal refs, and written directly by "git fetch"(man) as a plain file..

The FETCH_HEAD and MERGE_HEAD refs must be stored in a file, regardless of the type of ref backend. This is because they can hold more than just a single ref.

To accomodate them for alternate ref backends, read them from a file generically in refs_read_raw_ref().

This message is misleading in this case, because FETCH_HEAD is not written.

Also, because "fetch" is used to lazy-fetch missing objects in a partial clone, this significantly clutters up the output in that case since the objects to be fetched are potentially numerous.

Therefore, suppress this message when --no-write-fetch-head is passed (but not when --dry-run is set).

I was just trying to pull down a (patch) branch that I created from making changes directly from GitHub. The branch only appeared on GH. When I tried doing a g pull, the branch didn’t show up.

I was able to checkout the branch using:

Let me contribute to this, if it is possible.

GIT told me--->> FETCH_HEAD which means everything was already updated and there was anything to update from REMOTE BRANCH, the same information that FETCH instruction told me before. 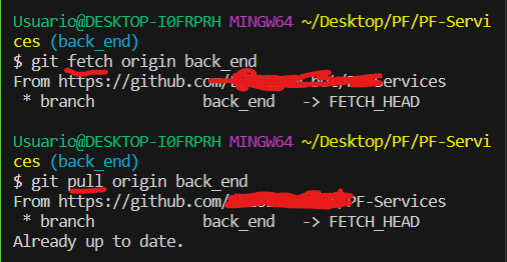 Not the answer you're looking for? Browse other questions tagged git git-pull git-fetch or ask your own question.

417
fatal: early EOF fatal: index-pack failed
360
How do I fetch only one branch of a remote Git repository?
57
Having a hard time understanding git-fetch
19
What does git fetch exactly do?
14
git fetch, FETCH_HEAD and origin/master
16
git fetch shows nothing on console
11
Git Fetch fails to work on bare repo, but git pull works on normal repo
6
How do you merge into another branch using travis with git commands?
7
What's the difference between "git fetch <url>" and "git add remote upstream <url>" followed by "git fetch upstream"?
3
How to download one specific gerrit change set in jenkins git plugin?
See more linked questions