This should be understood in the context of GitHub forks (where you fork a GitHub repo on GitHub before cloning that fork locally).

From the GitHub page:

When a repo is cloned, it has a default remote called origin that points to your fork on GitHub, not the original repo it was forked from.
To keep track of the original repo, you need to add another remote named upstream

(with aUser/aRepo the reference for the original creator and repository, that you have forked)

You will use upstream to fetch from the original repo (in order to keep your local copy in sync with the project you want to contribute to).

(git fetch alone would fetch from origin by default, which is not what is needed here)

You will use origin to pull and push since you can contribute to your own repository.

(again, without parameters, 'origin' is used by default)

You will contribute back to the upstream repo by making a pull request. 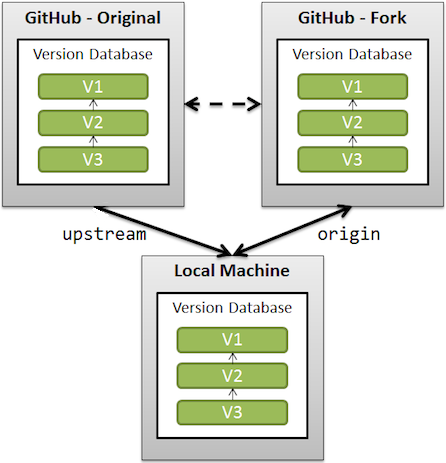 In a nutshell answer.

after cloning a fork you have to explicitly add a remote upstream, with git add remote "the original repo you forked from". This becomes your upstream, you mostly fetch and merge from your upstream. Any other business such as pushing from your local to upstream should be done using pull request.

When we run this command:

The -u flag means that your local branch will become a tracking branch. That is, a branch that tracks a remote branch (the upstream branch), so that future git pull will know which branch to merge from and git push will be directed to the correct remote branch.

When you clone a repository with git clone command, it automatically creates a remote connection called origin pointing back to the cloned repository. Origin is your fork of your own repo on GitHub, clone of the original repo of GitHub.

By running this command:

1862
Why do I need to do `--set-upstream` all the time?
860
Are Git forks actually Git clones?
1035
Definition of "downstream" and "upstream"
294
How to do a GitHub pull request
212
Github: Import upstream branch into fork
127
fatal: 'origin' does not appear to be a git repository
118
My pull request has been merged, what to do next?
60
How to update my fork to have the same branches and tags as the original repository on github?
20
update fork on GitHub for Windows?
17
Creating new projects from an existing "boilerplate" repo
See more linked questions

13506
What is the difference between 'git pull' and 'git fetch'?
3359
Difference between "git add -A" and "git add ."
2307
Showing which files have changed between two revisions
1501
Default behavior of "git push" without a branch specified
1998
Make the current Git branch a master branch
1869
How can I get a list of Git branches, ordered by most recent commit?
2567
How do I safely merge a Git branch into master?
1976
Remove tracking branches no longer on remote
1461
Difference between git stash pop and git stash apply