I understand the scenario presented in Pro Git about The Perils of Rebasing. The author basically tells you how to avoid duplicated commits:

Do not rebase commits that you have pushed to a public repository.

I am going to tell you my particular situation because I think it does not exactly fit the Pro Git scenario and I still end up with duplicated commits.

Let's say I have two remote branches with their local counterparts:

All four branches contains the same commits and I am going to start development in dev:

After a couple of commits I push the changes to origin/dev:

I have to go back to master to make a quick fix:

And back to dev I rebase the changes to include the quick fix in my actual development:

If I display the history of commits with GitX/gitk I notice that origin/dev now contains two identical commits C5' and C6' which are different to Git. Now if I push the changes to origin/dev this is the result:

Maybe I don't fully understand the explanation in Pro Git, so I would like to know two things:

You should not be using rebase here, a simple merge will suffice. The Pro Git book that you linked basically explains this exact situation. The inner workings might be slightly different, but here's how I visualize it:

So, in your dev branch, C5 and C6 effectively no longer exist: they are now C5' and C6'. When you push to origin/dev, git sees C5' and C6' as new commits and tacks them on to the end of the history. Indeed, if you look at the differences between C5 and C5' in origin/dev, you'll notice that though the content is the same, the line numbers are probably different -- which makes the hash of the commit different.

I'll restate the Pro Git rule: never rebase commits that have ever existed anywhere but your local repository. Use merge instead.

You omitted the fact that you ran git push, got the following error, and then proceeded to run git pull:

Despite Git trying to be helpful, its 'git pull' advice is most likely not what you want to do.

Each commit hash in Git is based on a number of factors, one of which is the hash of the commit that comes before it.

You can end up in a situation like this in multiple ways. Two ways I can think of:

Let's better understand what happened—here is an example:

You have a repository:

You then proceed to change commits.

(This is where you'll have to take my word for it: there are a number of ways to change commits in Git. In this example I changed the time of C3, but you be inserting new commits, changing commit messages, reordering commits, squashing commits together, etc.)

This is where it is important to notice that the commit hashes are different. This is expected behaviour since you have changed something (anything) about them. This is okay, BUT: 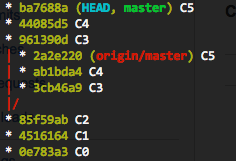 Trying to push will show you an error (and hint that you should run git pull).

If we run git pull, we see this log:

Or, shown another way:

And now we have duplicate commits locally. If we were to run git push we would send them up to the server.

Look at the reflog (git reflog) to see what the commit hash was before we ran git pull.

Above we see that ba7688a was the commit we were at before running git pull. With that commit hash in hand we can reset back to that (git reset --hard ba7688a) and then run git push --force.

But wait, I continued to base work off of the duplicated commits

If you somehow didn't notice that the commits were duplicated and proceeded to continue working atop of duplicate commits, you've really made a mess for yourself. The size of the mess is proportional to the number of commits you have atop of the duplicates.

Or, shown another way:

In this scenario we want to remove the duplicate commits, but keep the commits that we have based on them—we want to keep C6 through C10. As with most things, there are a number of ways to go about this:

I think you skipped an important detail when describing your steps. More specifically, your last step, git push on dev, would have actually given you an error, as you can not normally push non-fastforward changes.

So you did git pull before the last push, which resulted in a merge commit with C6 and C6' as parents, which is why both will remain listed in log. A prettier log format might have made it more obvious they are merged branches of duplicated commits.

Or you made a git pull --rebase (or without explicit --rebase if it is implied by your config) instead, which pulled the original C5 and C6 back in your local dev (and further re-rebased the following ones to new hashes, C7' C5'' C6'').

One way out of this could have been git push -f to force the push when it gave the error and wipe C5 C6 from origin, but if anyone else also had them pulled before you wiped them, you'd be in for a whole lot more trouble... basically everyone that has C5 C6 would need to do special steps to get rid of them. Which is exactly why they say you should never rebase anything that's already published. It's still doable if said "publishing" is within a small team, though.

I found out that in my case, this issue the consequence of a Git configuration problem. (Involving pull and merge)

Description of the problem:

Sympthoms: Commits duplicated on child branch after rebase, implying numerous merges during and after rebase.

Workflow: Here are steps of the workflow I was performing:

As conséquences of this workflow, duplication of all commits of "Feature-branch" since previous rebase... :-(

The issue was due to the pull of changes of child branch before rebase. Git default pull configuration is "merge". This is changing indexes of commits performed on the child branch.

The solution: in Git configuration file, configure pull to work in rebase mode:

Hope it can help JN Grx

If this happens, you can do the following:

where n == <number of duplicate commits that shouldn't be there.>

Then make sure you are pulling from the correct branch and then run:

Pulling with --rebase will ensure you aren't adding extraneous commits which could muddy up the commit history.

Here is a bit of hand holding for git rebase.

Not the answer you're looking for? Browse other questions tagged git branch rebase or ask your own question.

695
How do I push amended commit to the remote Git repository?
206
Git reset --hard and push to remote repository
19
Git: duplicate commits after local rebase, then pull
3
When i should/shouldn't use git pull --rebase
0
Duplicate Commits after rebase in the same branch
1
git rebase -i HEAD~5 and pull request with not mine commits
0
git: Pushing Single Commits, Reordering with rebase, Duplicate Commits
0
Messed up my rebase?? Tree is not flat anymore
0
git: Duplicate Commits After Local Rebase Followed by Pull
0
Git merging branch with duplicate commits
See more linked questions