How to find untracked files in a Perforce tree? (analogue of svn status)

Anybody have a script or alias to find untracked (really: unadded) files in a Perforce tree?

EDIT: I updated the accepted answer on this one since it looks like P4V added support for this in the January 2009 release.

EDIT: Please use p4 status now. There is no need for jumping through hoops anymore. See @ColonelPanic's answer.

In the Jan 2009 version of P4V, you can right-click on any folder in your workspace tree and click "reconcile offline work..."

This will do a little processing then bring up a split-tree view of files that are not checked out but have differences from the depot version, or not checked in at all. There may even be a few other categories it brings up.

You can right-click on files in this view and check them out, add them, or even revert them.

It's a very handy tool that's saved my ass a few times.

On linux, or if you have gnu-tools installed on windows:

This will show an error message for every unaccounted file. If you want to capture that output:

This will print out a list of files that are not added in your client or the Perforce depot. I've used ! -name '*~' to exclude files ending with ~.

Ahh, one of the Perforce classics :) Yes, it really sucks that there is STILL no easy way for this built into the default commands.

The easiest way is to run a command to find all files under your clients root, and then attempt to add them to the depot. You'll end up with a changelist of all new files and existing files are ignored.

If you want a physical list (in the console or file) then you can pipe on the results of a diff (or add if you also want them in a changelist).

If you're running this within P4Win you can use $r to substitute the client root of the current workspace.

Is there an analogue of svn status or git status?

As of Perforce version 2012.1, there's the command p4 status and in P4V 'reconcile offline work'. However, they're both very slow. To exclude irrelevant files you'll need to write a p4ignore.txt file per https://stackoverflow.com/a/13126496/284795

I am reasonably sure that it was accurate in 2016, for whatever version of Perforce I was using them (which was not necessarily the most current). But it seems that this problem or design limitation has been remedied in subsequent releases of Perforce. I do not know what the stack overflow etiquette for this is -- should this answer be removed?

I feel impelled to add an answer, since the accepted answer, and some of the others, have what I think is a significant problem: they do not understand the difference between a read-only query command, and a command that makes changes.

I don't expect any credit for this answer, but I hope that it will help others avoid wasting time and making mistakes by following the accepted but IMHO incorrect answer.

Probably the most convenient way to find all untracked files in a perforce workspace is p4 reconcile -na.

-a says "give me files that are not in the repository, i.e. that should be added".

-n says "make no changes" - i.e. a dry-run. (Although the messages may say "opened for add", mentally you must interpret that as "would be opened for add if not -n")

Several answers provided scripts, often involving p4 fstat. While I have not verified all of those scripts, I often use similar scripts to make up for the deficiencies of perforce commands such as p4 reconcile -n - e.g. often I find that I want local paths rather than Perforce depot paths or workspace paths.

p4 status is NOT the counterpart to the status commands on other version control systems.

If you do p4 status, look at the files and think "Oh, I don't need those", then you will have to p4 revert them if you want to continue editing in the same workspace. Or else the changes that p4 status added to your changeset will be checked in the next time.

There seems to be little or no reason to use p4 status rather than p4 reconcile -n, except for some details of local workspace vs depot pathname.

I can only imagine that whoever chose 'status' for a non-read-only command had limited command of the English language and other version control tools.

In the GUI p4v, the reconcile command finds local changes that may need to be added, deleted, or opened for editing. Fortunately it does not add them to a changelist by default; but you still may want to be careful to close the reconcile window after inspecting it, if you don't want to commit the changes.

I use the following in my tool that backs up any files in the workspace that differ from the repository (for Windows). It handles some odd cases that Perforce doesn't like much, like embedded blanks, stars, percents, and hashmarks:

"dir /S /B /A-D" lists all files at or below this folder (/S) in "bare" format (/B) excluding directories (/A-D). The "sed" changes dangerous characters to their "%xx" form (a la HTML), and the "p4 have" command checks this list ("-x-") against the server discarding anything about files it actually locates in the repository ("1>NUL:"). The result is a bunch of lines like:

Alternatively from P4Win, use the ""Local Files not in Depot" option on the left hand view panel.

I don't use P4V much, but I think the equivalent is to select "Hide Local Workspace Files" in the filter dropdown of the Workspace view tab.p4 help fstat

In P4V 2015.1 you'll find these options under the filter button like this: 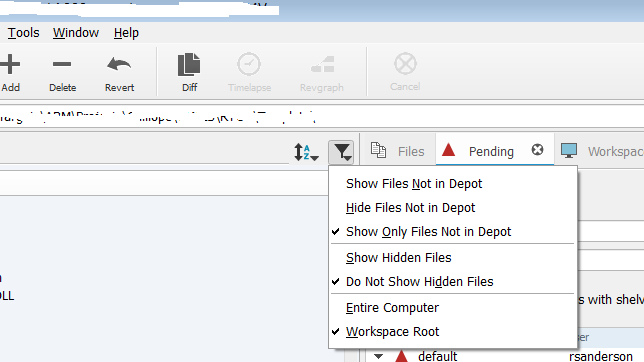 Quick 'n Dirty: In p4v right-click on the folder in question and add all files underneath it to a new changelist. The changelist will now contain all files which are not currently part of the depot.

The following commands produce status-like output, but none is quite equivalent to svn status or git status, providing a one-line summary of the status of each file:

I don't have enough reputation points to comment, but Ross' solution also lists files that are open for add. You probably do not want to use his answer to clean your workspace.

The following uses p4 fstat (thanks Mark Harrison) instead of p4 have, and lists the files that aren't in the depot and aren't open for add.

Fast method, but little orthodox. If the codebase doesn't add new files / change view too often, you could create a local 'git' repository out of your checkout. From a clean perforce sync, git init, add and commit all files locally. Git status is fast and will show files not previously committed.

The p4 fstat command lets you test if a file exists in the workspace, combine with find to locate files to check as in the following Perl example:

If it is 'opened for delete' then it has been removed from the workspace. Note that the above command is running in preview mode (-n).

I needed something that would work in either Linux, Mac or Windows. So I wrote a Python script for it. The basic idea is to iterate through files and execute p4 fstat on each. (of course ignoring dependencies and tmp folders)

In P4V, under the "View" menu item choose "Files in Folder" which brings up a new tab in the right pane. To the far right of the tabs there is a little icon that brings up a window called "Files in Folder" with 2 icons. Select the left icon that looks like a funnel and you will see several options. Choose "Show items not in Depot" and all the files in the folder will show up. Then just right-click on the file you want to add and choose "Mark for Add...". You can verify it is there in the "Pending" tab. Just submit as normal (Ctrl+S).

Not the answer you're looking for? Browse other questions tagged version-control perforce or ask your own question.

1580
How do I migrate an SVN repository with history to a new Git repository?
780
How do I ignore a directory with SVN?
854
Git for beginners: The definitive practical guide
1026
Git workflow and rebase vs merge questions
350
How do I do a 'git status' so it doesn't display untracked files without using .gitignore?
1013
How can I stop .gitignore from appearing in the list of untracked files?
8835
How do I force "git pull" to overwrite local files?
159
How to delete a workspace in Perforce (using p4v)?
6
"Actually, Perforce I don't want you tracking that file after all ..." how do I get Perforce to listen?
6
How to keep change history while renaming files in Visual Studio using Perforce