CGContextStrokePath not working when zooming and drawing images

I'm drawing lines according to touchesMoved: method and normally it works fine. But when I zoom into the image and draw, the previously drawn lines are both displaced and keep getting more and more blurry, ultimately vanishing. I've tried using UIPinchGestureRecognizer and simply increasing the frame of myImageView (for multi-touch events only) but the problem occurs both ways. Here's the code for drawing:

Here is the image drawn over without zooming: 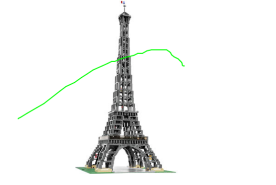 And this is the image depicting the problem after zooming-in with the red arrow showing the segment that was already drawn before zooming-in (as shown in previous image). The image is both blurred and displaced: 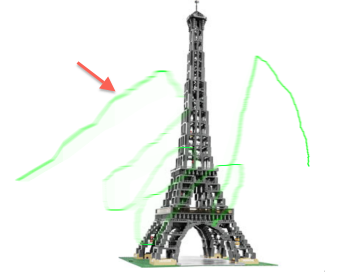 It can also be noticed that a part of the line drawn towards the end is unaffected and the phenomenon occurs for lines drawn back in time. I believe the reason for this is that the image size attributes are being lost when I zoom in/out which probably causes the blur and shift, but I'm not sure about that!

EDIT 2- Here's a sample single-view app focussing on the problem.

I downloaded your project and I found the problem is of autoresizing. The following steps will solve it:

Step 2. Add one line of code after drawImage is alloced (line 90) in viewDidLoad method:

Then, the bug is fixed.

You are always just drawing to an image context the size of your image view - this of course gets blurry, as you do not adapt to a higher resolution when zoomed in. It would be more sensible to instead create a UIBezierPath once and just add a line to it (with addLineToPoint:) in the touchesMoved method, then draw it in a custom drawRect method via [bezierPath stroke]. You could also just add a CAShapeLayer as a subview of the image view and set its path property to the CGPath property of the bezierPath you created earlier.

See Drawing bezier curves with my finger in iOS? for an example.

If you save path as image you get bad looking scaling as result. Also - do not draw path straight to image - draw to some transparent view and split them together at the end of editing.

Not the answer you're looking for? Browse other questions tagged iphone ios uiimage core-graphics pinch or ask your own question.

8
Drawing bezier curves with my finger in iOS?

5
Drawing custom graphics on the iPhone: CALayer vs. CGContext
44
How to Zoom In/Out Photo on double Tap in the iPhone WWDC 2010 - 104 PhotoScroller
10
Drawing simple lines on iPhone with CoreGraphics
2
Iphone pixel distortion while zooming OpenGL ES content for Paint app
143
to drawRect or not to drawRect (when should one use drawRect/Core Graphics vs subviews/images and why?)
0
Custom Pattern Pencil Sketch Drawing
675
iOS 8 UITableView separator inset 0 not working
13
Drawing on a UIImageView inside a UIScrollView