Load view from an external xib file in storyboard

My full example is here, but I will provide a summary below.

Add a .swift and .xib file each with the same name to your project. The .xib file contains your custom view layout (using auto layout constraints preferably).

Add the following code to the .swift file and hook up the outlets and actions from the .xib file. 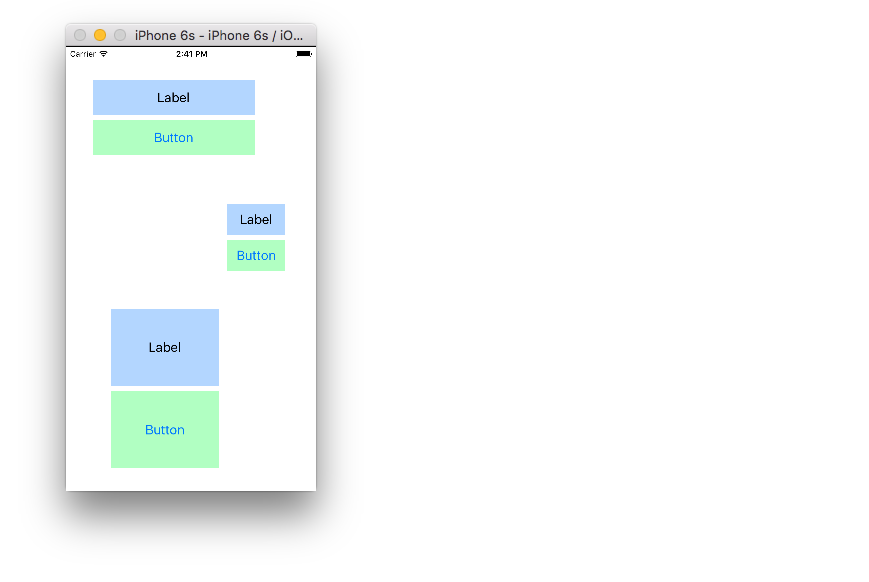 For a while Christopher Swasey's approach was the best approach I had found. I asked a couple of the senior devs on my team about it and one of them had the perfect solution! It satisfies every one of the concerns that Christopher Swasey so eloquently addressed and it doesn't require boilerplate subclass code(my main concern with his approach). There is one gotcha, but other than that it is fairly intuitive and easy to implement.

Here is the protocol you will want to reference:

And here is an example of MyCustomClass that implements the protocol (with the .xib file being named MyCustomClass.xib):

NOTE: If you miss the Gotcha and set the class value inside your .xib file to be your custom class, then it will not draw in the storyboard and you will get a EXC_BAD_ACCESS error when you run the app because it gets stuck in an infinite loop of trying to initialize the class from the nib using the init?(coder aDecoder: NSCoder) method which then calls Self.nib.instantiate and calls the init again.

Assuming that you've created an xib that you want to use:

2) Add a view that's based on the xib as a subview to this view at initialization.

3) Wherever you want to use it in your storyboard, add a UIView as you normally would, select the newly added view, go to the Identity Inspector (the third icon on the upper right that looks like a rectangle with lines in it), and enter your subclass's name in as the "Class" under "Custom Class".

I've always found the "add it as a subview" solution unsatisfactory, seeing as it screws with (1) autolayout, (2) @IBInspectable, and (3) outlets. Instead, let me introduce you to the magic of awakeAfter:, an NSObject method.

awakeAfter lets you swap out the object actually woken up from a NIB/Storyboard with a different object entirely. That object is then put through the hydration process, has awakeFromNib called on it, is added as a view, etc.

We can use this in a "cardboard cut-out" subclass of our view, the only purpose of which will be to load the view from the NIB and return it for use in the Storyboard. The embeddable subclass is then specified in the Storyboard view's identity inspector, rather than the original class. It doesn't actually have to be a subclass in order for this to work, but making it a subclass is what allows IB to see any IBInspectable/IBOutlet properties.

This extra boilerplate might seem suboptimal—and in a sense it is, because ideally UIStoryboard would handle this seamlessly—but it has the advantage of leaving the original NIB and UIView subclass completely unmodified. The role it plays is basically that of an adapter or bridge class, and is perfectly valid, design-wise, as an additional class, even if it is regrettable. On the flip side, if you prefer to be parsimonious with your classes, @BenPatch's solution works by implementing a protocol with some other minor changes. The question of which solution is better boils down to a matter of programmer style: whether one prefers object composition or multiple inheritance.

Note: the class set on the view in the NIB file remains the same. The embeddable subclass is only used in the storyboard. The subclass can't be used to instantiate the view in code, so it shouldn't have any additional logic, itself. It should only contain the awakeAfter hook.

⚠️ The one significant drawback here is that if you define width, height, or aspect ratio constraints in the storyboard that don't relate to another view then they have to be copied over manually. Constraints that relate two views are installed on the nearest common ancestor, and views are woken from the storyboard from the inside-out, so by the time those constraints are hydrated on the superview the swap has already occurred. Constraints that only involve the view in question are installed directly on that view, and thus get tossed when the swap occurs unless they are copied.

Note that what is happening here is constraints installed on the view in the storyboard are copied to the newly instantiated view, which may already have constraints of its own, defined in its nib file. Those are unaffected.

instantiateViewFromNib is a type-safe extension to UIView. All it does is loop through the NIB's objects until it finds one that matches the type. Note that the generic type is the return value, so the type has to be specified at the call site.

Although the top most popular answers works fine, they are conceptually wrong. They all use File's owner as connection between class's outlets and UI components. File's owner is supposed to be used only for top-level objects not UIViews. Check out Apple developer document. Having UIView as File's owner leads to these undesirable consequences.

There's elegant way to do it without using File's owner. Please check this blog post. It explains how to do it the right way.

I think about alternative for using XIB views to be using View Controller in separate storyboard.

Then we can set up delegation and communication between this embed ViewController and main view controller through prepare for segue. This approach is different then displaying UIView, but much simpler and more efficiently (from programming perspective) can be utilised to achieve the same goal, i.e. have reusable custom view that is visible in main storyboard

The additional advantage is that you can implement you logic in CustomViewController class and there set up all delegation and view preparation without creating separate (harder to find in project) controller classes, and without placing boilerplate code in main UIViewController using Component. I think this is good for reusable components ex. Music Player component (widget like) that is embeddable in other views.

Best solution currently is to just use a custom view controller with its view defined in a xib, and simply delete the "view" property that Xcode creates inside the storyboard when adding the view controller to it (don't forget to set the name of the custom class though).

This will make the runtime automatically look for the xib and load it. You can use this trick for any kind of container views, or content view.

Solution for Objective-C according to steps described in Ben Patch's response.

Use extension for UIView:

First prepare your MyView.xib as Ben Patch's response says so set class MyView for File's owner instead of main view inside this XIB.

Warning! Preview of this view will not be shown in Storyboard if you use WatchKit Extension because of this bug in Xcode >= 9.2: https://forums.developer.apple.com/thread/95616

Here's the answer you've wanted all along. You can just create your CustomView class, have the master instance of it in a xib with all the subviews and outlets. Then you can apply that class to any instances in your storyboards or other xibs.

No need to fiddle with File's Owner, or connect outlets to a proxy or modify the xib in a peculiar way, or add an instance of your custom view as a subview of itself.

It even works with IBDesignable to refer your custom view (including the subviews from the xib) at design time in the storyboard.

You can read more about it here: https://medium.com/build-an-app-like-lego/embed-a-xib-in-a-storyboard-953edf274155

And you can get the open source BFWControls framework here: https://github.com/BareFeetWare/BFWControls

And here's a simple extract of the NibReplaceable code that drives it, in case you're curious: https://gist.github.com/barefeettom/f48f6569100415e0ef1fd530ca39f5b4

This solution can be used even if your class does not have the same name as the XIB. For example, if you have a base view controller class controllerA which has a XIB name controllerA.xib and you subclassed this with controllerB and want to create an instance of controllerB in a storyboard, then you can:

Not the answer you're looking for? Browse other questions tagged ios uiview storyboard xib or ask your own question.

0
Loading UIView from XIB using Storyboard - view's properties are nil
1
Why is this View nil in awakeFromNib()?
118
How do I create a custom iOS view class and instantiate multiple copies of it (in IB)?
2
Loading a xib from a view subclass in Swift
2
In iOS, how to connect a Label to a View using a storyboard?
2
Get the type name of derived type in a static method of base class or extension Swift
0
How to reuse same UIView in all viewcontrollers in iOS App
1
UIView loaded from Xib does not apply AutoLayout correctly
0
Instantiating custom xib programmatically ends with infinite loop
0
Is there a more optimised/ efficient way to create custom UIView directly from XIB, in storyboard?
See more linked questions

297
How do you load custom UITableViewCells from Xib files?
112
How to load a xib file in a UIView
187
How can I load storyboard programmatically from class?
4
iOS Universal App without storyboard or xib file
134
Xcode changes unmodified storyboard and XIB files
2
Multiple ViewControllers, xib files, in one Single Storyboard
2
iOS, How to load a .xib into another .xib?
1
Passing data from xib cell to viewcontroller