How to decrypt a SHA-256 encrypted string?

I have a string that was salted, hashed with SHA-256, then base64 encoded. Is there a way to decode this string back to its original value?

One thing you can do is a brute-force strategy, where you guess what was hashed, then hash it with the same function and see if it matches. Unless the hashed data is very easy to guess, it could take a long time though.

You may find the question "Difference between hashing a password and encrypting it" interesting.

It should be noted - Sha256 does not encrypt the data/content of your string, it instead generates a fixed size hash, using your input string as a seed.

This being the case - I could feed in the content of an encyclopedia, which would be easilly 100 mb in size of text, but the resulting string would still be 256 bits in size.

Its impossible for you to reverse the hash, to get that 100mb of data back out of the fixed size hash, the best you can do, is try to guess / compute the seed data, hash, and then see if the hash matches the hash your trying to break.

If you could reverse the hash, you would have the greatest form of compression to date.

You've done the correct thing by using a salt aka SSHA.

SHA and SHA-2 (or SHA-256) by itself without a salt are NOT considered secure anymore! Salting a SHA hash is called Salted SHA or SSHA.

Below is a simple example on how easily it is to de-hash SHA-1. The same can be done for SHA-2 without much effort as well.

Here's a page which de-hashes SHA-2. The way this pages works is somebody must have hashed your password before, otherwise it won't find it: md5hashing dot net/hashing/sha256

Here's a page that claims to have complete SHA-2 tables available for download for a "donation" (I haven't tried it yet): crackstation dot net/buy-crackstation-wordlist-password-cracking-dictionary.htm

Here's a good article that explains why you have to use SSHA over SHA: crackstation dot net/hashing-security.htm

I was aware of the original plain input string of my encrypted string and try to test my changes. I came across the this web link. I manage to decrypt and test the value and get original value.

But I manage to decrypt.
please refer following screenshots and link to try it your self . 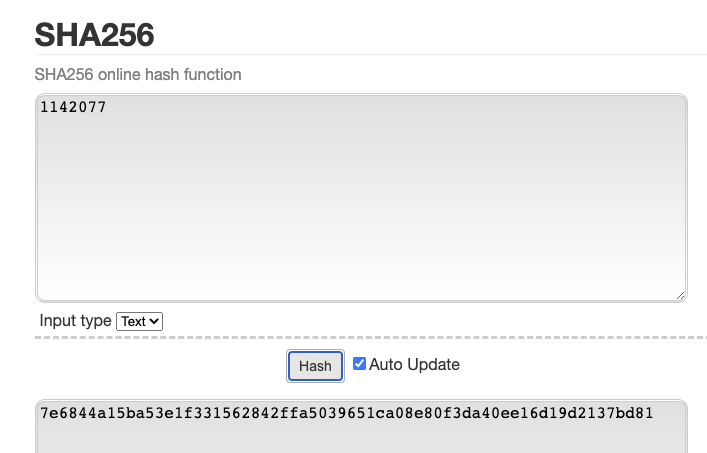 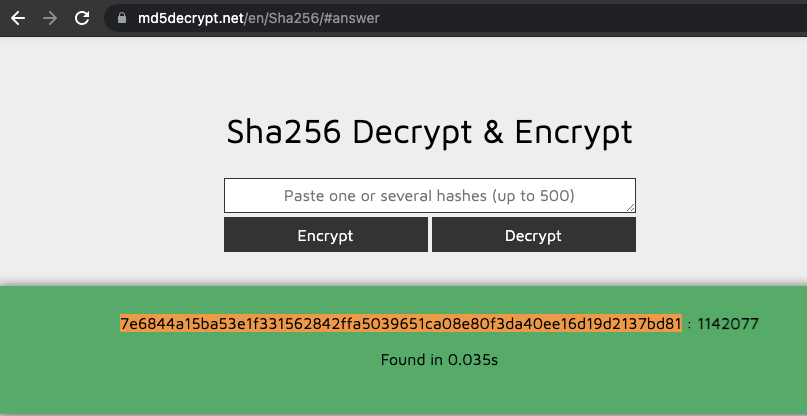 Beware that if we try to decode any random string which is not encoded with SHA256 it wont decode you can try your your self.

But i feel that link works well for decrypt a SHA-256 encoded string.

Not the answer you're looking for? Browse other questions tagged java hash cryptography or ask your own question.

-3
Decrypt SHA encrypted string
1
Can SHA-256 Be Decrypted?
-2
How to decrypt SHA512 password through Php?
0
how to get original string value from encrypted string?
0
return original value of sha256
0
Groovy cannot decrypt password
-1
encryption and decryption of values using sha2 in php?
-1
What is the quivalent decrypt code
0
Get hashed value from HMAC SHA256 in Swift
153
Difference between Hashing a Password and Encrypting it
See more linked questions

1542
Fastest way to determine if an integer's square root is an integer
4398
How do I read / convert an InputStream into a String in Java?
3792
How do I generate random integers within a specific range in Java?
1217
Secure hash and salt for PHP passwords
510
Decode Base64 data in Java
2168
How to get an enum value from a string value in Java
412
Java 256-bit AES Password-Based Encryption
3270
How do I convert a String to an int in Java?
3484
How can I create a memory leak in Java?
3642
Why is char[] preferred over String for passwords?