How to handle initializing and rendering subviews in Backbone.js?

I have three different ways to initialize and render a view and its subviews, and each one of them has different problems. I'm curious to know if there is a better way that solves all of the problems:

Initialize the children in the parent's initialize function. This way, not everything gets stuck in render so that there is less blocking on rendering.

Initialize the children in the parent's initialize() still, but instead of appending, use setElement().delegateEvents() to set the child to an element in the parents template.

Initialize the children in the parent's render() method instead.

Really curious to get your guys' take on this. Which scenario would you use? or is there a fourth magical one that solves all of these problems?

Have you ever kept track of a rendered state for a View? Say a renderedBefore flag? Seems really janky.

This is a great question. Backbone is great because of the lack of assumptions it makes, but it does mean you have to (decide how to) implement things like this yourself. After looking through my own stuff, I find that I (kind of) use a mix of scenario 1 and scenario 2. I don't think a 4th magical scenario exists because, simply enough, everything you do in scenario 1 & 2 must be done.

I think it'd be easiest to explain how I like to handle it with an example. Say I have this simple page broken into the specified views: 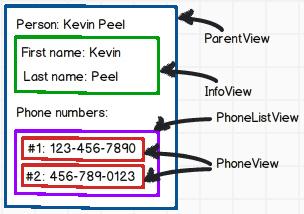 Say the HTML is, after being rendered, something like this:

Hopefully it's pretty obvious how the HTML matches up with the diagram.

So on to your actual question. I handle initialization and rendering differently based on the view type. I break my views into two types, Parent views and Child views.

Like I mentioned before, the biggest difference between these two categories is when they're allowed to render. In a perfect world, I want Parent views to only ever render once. It is up to their child views to handle any re-rendering when the model(s) change. Child views, on the other hand, I allow to re-render anytime they need since they don't have any other views relying upon them.

In a little more detail, for Parent views I like my initialize functions to do a few things:

Step 1 is pretty self explanatory.

Step 2, the rendering, is done so that any elements the child views rely on already exist before I try to assign them. By doing this, I know all child events will be correctly set, and I can re-render their blocks as many times as I want without worrying about having to re-delegate anything. I do not actually render any child views here, I allow them to do that within their own initialization.

Steps 3 and 4 are actually handled at the same time as I pass el in while creating the child view. I like to pass an element in here as I feel the parent should determine where in its own view the child is allowed to put its content.

For rendering, I try to keep it pretty simple for Parent views. I want the render function to do nothing more than render the parent view. No event delegation, no rendering of child views, nothing. Just a simple render.

Sometimes this doesn't always work though. For instance in my example above, the #name element will need to be updated any time the name within the model changes. However, this block is part of the ParentView template and not handled by a dedicated Child view, so I work around that. I will create some sort of subRender function that only replaces the content of the #name element, and not have to trash the whole #parent element. This may seem like a hack, but I've really found it works better than having to worry about re-rendering the whole DOM and reattaching elements and such. If I really wanted to make it clean, I'd create a new Child view (similar to the InfoView) that would handle the #name block.

Now for Child views, the initialization is pretty similar to Parent views, just without the creation of any further Child views. So:

Child view rendering is also very simple, just render and set the content of my el. Again, no messing with delegation or anything like that.

Here is some example code of what my ParentView may look like:

You can see my implementation of subRender here. By having changes bound to subRender instead of render, I don't have to worry about blasting away and rebuilding the whole block.

The binds are the important part here. By binding to my model, I never have to worry about manually calling render myself. If the model changes, this block will re-render itself without affecting any other views.

The PhoneListView will be similar to the ParentView, you'll just need a little more logic in both your initialization and render functions to handle collections. How you handle the collection is really up to you, but you'll at least need to be listening to the collection events and deciding how you want to render (append/remove, or just re-render the whole block). I personally like to append new views and remove old ones, not re-render the whole view.

The PhoneView will be almost identical to the InfoView, only listening to the model changes it cares about.

Hopefully this has helped a little, please let me know if anything is confusing or not detailed enough.

I'm not sure if this directly answers your question, but I think it's relevant:

The context in which I set up this article is different, of course, but I think the two solutions I offer, along with the pros and cons of each, should get you moving in the right direction.

To me it does not seem like the worst idea in the world to differentiate between the intital setup and subsequent setups of your views via some sort of flag. To make this clean and easy the flag should be added to your very own View which should extend the Backbone (Base) View.

Same as Derick I am not completely sure if this directly answers your question but I think it might be at least worth mentioning in this context.

Also see: Use of an Eventbus in Backbone

I'm trying to avoid coupling between views like these. There are two ways I usually do:

Basically, you let your router function initialize parent and child view. So the view has no knowledge of each other, but the router handles it all.

Passing the same el to both views

Both have knowledge of the same DOM, and you can order them anyway you want.

What I do is giving each children an identity (which Backbone has already done that for you: cid)

When Container does the rendering, using the 'cid' and 'tagName' generate a placeholder for every child, so in template the children has no idea about where it will be put by the Container.

than you can using

no specified placeholder is needed, and Container only generate the placeholder rather than the children's DOM structure. Cotainer and Children are still generating own DOM elements and only once.

Here is a light weight mixin for creating and rendering subviews, which I think addresses all the issues in this thread:

The approach taken by this plug is create and render subviews after the first time the parent view is rendered. Then, on subsequent renders of the parent view, $.detach the subview elements, re-render the parent, then insert the subview elements in the appropriate places and re-render them. This way subviews objects are reused on subsequent renders, and there is no need to re-delegate events.

Note that the case of a collection view (where each model in the collection is represented with one subview) is quite different and merits its own discussion / solution I think. Best general solution I am aware of to that case is the CollectionView in Marionette.

EDIT: For the collection view case, you may also want to check out this more UI focused implementation, if you need selection of models based on clicks and / or dragging and dropping for reordering.

Not the answer you're looking for? Browse other questions tagged javascript backbone.js or ask your own question.

21
Backbone.js - Should nested Views maintain references to each other?
9
backbone.js - accessing a model from a click event
5
Managing views with routers in Backbone.js
2
Rendering view into parent div by passing specified el into child view instaniation
0
How to avoid double event binding in Backbonejs View?
0
What is the correct usage for backbonejs view's initialize() and render()?
0
How to set .el to div which is in underscore.js template?
0
backbone.js uncaught typeError in parentView trying to instantiate a subView
0
Issue displaying child view which contains search box - Backbone.js