A little something that could be borrowed from IDEs. So the idea would be to highlight function arguments (and maybe scoped variable names) inside function bodies. This is the default behaviour for some C: 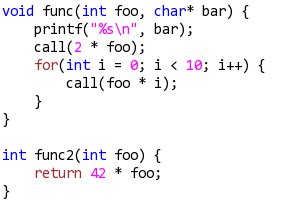 Well, if I were to place the cursor inside func I would like to see the arguments foo and bar highlighted to follow the algorithm logic better. Notice that the similarly named foo in func2 wouldn't get highlit. This luxury could be omitted though... 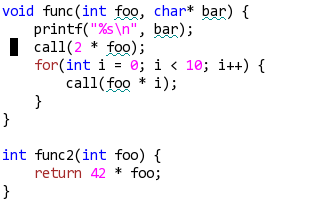 Using locally scoped variables, I would also like have locally initialized variables highlit: 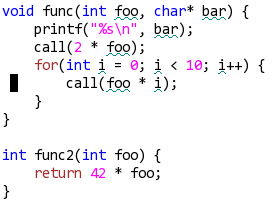 Finally to redemonstrate the luxury: 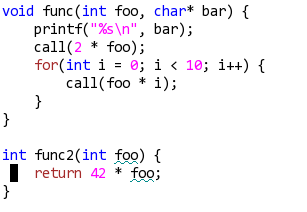 Not so trivial to write this. I used the C to give a general idea. Really I could use this for Scheme/Clojure programming better:

This should recognize let, loop, for, doseq bindings for instance.

My vimscript-fu isn't that strong; I suspect we would need to

As a function this could be mapped to a key (if very resource intensive) or CursorMoved if not so slow.

Okay, now. Has anyone written/found something like this? Do the vimscript gurus have an idea on how to actually start writing such a script?

Sorry about slight offtopicness and bad formatting. Feel free to edit/format. Or vote to close.

This is much harder than it sounds, and borderline-impossible with the vimscript API as it stands, because you don't just need to parse the file; if you want it to work well, you need to parse the file incrementally. That's why regular syntax files are limited to what you can do with regexes - when you change a few characters, vim can figure out what's changed in the syntax highlighting, without redoing the whole file.

The vim syntax highlighter is limited to dealing with regexes, but if you're hellbent on doing this, you can roll your own parser in vimscript, and have it generate a buffer-local syntax that refers to tokens in the file by line and column, using the \%l and \%c atoms in a regex. This would have to be rerun after every change. Unfortunately there's no autocmd for "file changed", but there is the CursorHold autocmd, which runs when you've been idle for a configurable duration.

One possible solution can be found here. Not the best way because it highlights every occurrence in the whole file and you have to give the command every time (probably the second one can be avoided, don't know about the first). Give it a look though.

Not the answer you're looking for? Browse other questions tagged clojure vim or ask your own question.

1140
How to effectively work with multiple files in Vim
2088
How to replace a character by a newline in Vim
1717
How to duplicate a whole line in Vim?
1262
How do I move to end of line in Vim?
2017
Vim clear last search highlighting
1125
What is your most productive shortcut with Vim?
1283
What's a quick way to comment/uncomment lines in Vim?
1746
How to do case insensitive search in Vim
1497
How does the vim “write with sudo” trick work?
4162
How do I exit the Vim editor?