Are there any guidelines on when to use storyboards in an iOS project and when to use XIBs? what are the pros and cons of each and what situations do they each suit?

Near as I can tell it's not that clean to use storyboard segues when you have view controllers being pushed by dynamic UI elements (Like map pins).

Update 1/12/2016: It's 2016 and I still prefer laying out my UIs in code and not in Storyboards. That being said, Storyboards have come a long way. I have removed all the points from this post that simply do not apply anymore in 2016.

Update 4/24/2015: Interestingly Apple doesn't even use Storyboards in their recently open-sourced ResearchKit as Peter Steinberger has noticed (under the subheading "Interface Builder").

Update 6/10/2014: As expected, Apple keeps improving Storyboards and Xcode. Some of the points that applied to iOS 7 and below don't apply to iOS 8 anymore (and are now marked as such). So while Storyboards inherently still have flaws, I revise my advice from don't use to selectively use where it makes sense.

Even now that iOS 9 is out, I would advise to use caution when deciding whether to use Storyboards. Here are my reasons:

These are my reasons for why I really don't like working with storyboards. Some of these reasons also apply to XIBs. On the storyboard-based projects that I've worked on, they have cost me much more time than they have saved and they made things more complicated instead of easier.

However, I do agree that laying out all of your UI in code might not be a one-size-fits-all solution for every project. If your iPad UI differs greatly from your iPhone UI in certain places, it might make sense to create a XIB for just those areas.

A lot of the problems outlined above could be fixed by Apple and I hope that that's what they will do.

Update: In Xcode 5, Apple took away the option to create a project without a Storyboard. I've written a small script that ports Xcode 4's templates (with Storyboard-opt-out option) to Xcode 5: https://github.com/jfahrenkrug/Xcode4templates

I have used XIBs extensively and completed two projects using Storyboards. My learnings are:

I think Storyboards are a step in the right direction for UI implementation and hope Apple will extend them in future iOS versions. They need to resolve the "single file" issue though, otherwise they won't be attractive for larger projects.

If I start a small size app and can afford iOS5 only compatibility, I would use Storyboards. For all other cases I stick to XIBs.

Storyboards were created to help developers visualize their application and the flow of the application. It is alot like having a bunch of xib but in a single file.

There is a question similar to this located What is the difference between a .xib file and a .storyboard?.

You can also create custom transitions via code that will change dynamically if needed, much like you can with .xibs.

There really isn't a right / wrong when to use one or the other, it is just a matter of preference and what iOS versions you are wanting to use.

I will just state 4 simple reasons why you should use storyboards, especially in a productive environment where you have to work in a team of product owners, product managers, UX designers, etc.

I won't write up any CONS, since Johannes has already listed probably all the viable ones in his answer. And most of them are definitely not viable, especially not with XCode6's major improvements.

I don't think there is a right answer for your question, it's just a matter of personal experience and what you feel more confortable with.

In my opinion, Storyboards are a great thing. It's true, it's really hard to find out why your app is misteriously crashing at runtime, but after some time and experience you'll realize it's always related to some IBOutlet missing somewhere and you'll be easily able to fix it.

The only real issue is working in team under version control with storyboards, in the early stages of development it could be a real mess. But after that first stage, UI updates that completely changes the storyboard are very rare, and in most cases you end up with conflicts in the very last parts of the xml, which are segue references that usually autofix themselves when you re-open the storyboard. In our team work we prefered to deal with this instead of heavy view-controllers with tons of view code.

I've read many comments againts auto-layout. With XCode5 it got really improved, It's really good even for autorotating layouts. In some case you'll have to do something in code, but you can simply outlet the constraint you need to edit and, at that point, do what you need in your code. Even animate them.

I also think that most of the people who dislike storyboards didn't fully try to understand the power of a custom manual segue, where you can totally customize (in a single file) the way you transition from a way to another and also (with some tricks) even reuse a previously loaded view controller by just updating it's view contents instead of fully reload the whole thing. At the end you can really do the same things as in code, but I think you have a better separation of concerns with storyboards, but I agree that in many things they lack of features (fonts, image as color background, ecc...).

I am not using StoryBoard or XIBs in my any of the app.. but creating everything programmatically.

√ You can create any complex kind of UI or transition animations for UIView's.

√ Support all iOS versions. No need to worry about < iOS 5.

√ *Your app would support all iPhone/iPod/iPad devices within your code.

√ You're always updated as you know the code that'll always work.

√ *Will work on any (new) device launched – No need to change in code.

√ Everything is upto you. At certain place you want to change something – No need to look into storyboard or xib. Just search for it in particular class.

√ Last but not the list – You'll never forget that, how to manage everything programmatically. This is the best thing as you know a control very deep then anyone.

I've never find a problem by not using SB or XIBs as I'm good with this.

* if you've set UIKit's object frames according to screen size.

P.S. If you've still not done this thing – you may faced difficulty (or may feel boring) but once you get familiar with this – its really a Candy for you.

If you are about to care about Storyboard performance, watch WWDC 2015 Session 407 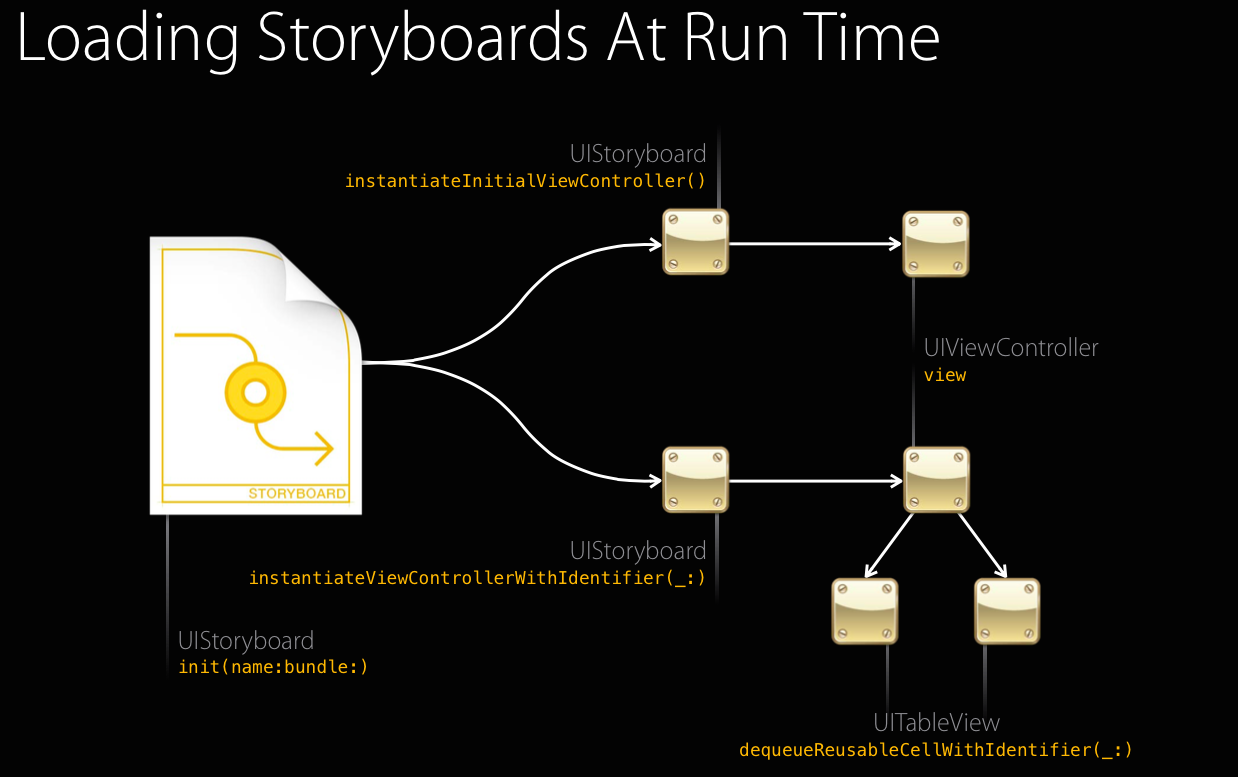 When interface builder is compiling a storyboard it's doing two things first, it's trying to maximize the performance of your application and secondly it's also minimizing the number of nib files created.

By having separate nib files for both the view controller and the view, this means the view hierarchy can be loaded on demand.

No view controllers no views yet.

I have been working on a reasonably sized project (>20 scenes in storyboard parlance), and have come across many limitations and have to repeatedly go to documentation and google searches for doing things.

I would use storyboards for smaller applications with small team sizes and use XIB approach for medium-large teams/projects.

Not the answer you're looking for? Browse other questions tagged ios xcode uistoryboard xcode-storyboard or ask your own question.

10
iOS Storyboards Should I use them or not?
137
Segue to another storyboard?
166
What is the difference between a .xib file and a .storyboard?
73
What are the benefits of using Storyboards instead of xib files in iOS programming?
29
iOS - best practice for managing code merge in a storyboard
12
What are the advantages of iOS 5.0 storyboarding over traditional UI layout?
11
Pros and cons of using storyboards
12
XIB over Storyboard
7
iOS version of Fragments
4
Using Storyboard VS .xib (XCode 5)
See more linked questions

1921
What's the difference between the atomic and nonatomic attributes?
98
iOS5 Storyboard error: Storyboards are unavailable on iOS 4.3 and prior
217
In a storyboard, how do I make a custom cell for use with multiple controllers?
602
What are Unwind segues for and how do you use them?
2
Xcode Storyboard Organization and Duplication of Effort
297
Best practices for Storyboard login screen, handling clearing of data upon logout
0
Storyboard or Xib in a multiple developer project
66
Storyboard reference in Xcode, where should we use it?
3
Storyboards vs. Xibs - iOS9