I'm looking for guidance on good practices when it comes to return errors from a REST API. I'm working on a new API so I can take it any direction right now. My content type is XML at the moment, but I plan to support JSON in future.

I am now adding some error cases, like for instance a client attempts to add a new resource but has exceeded his storage quota. I am already handling certain error cases with HTTP status codes (401 for authentication, 403 for authorization and 404 for plain bad request URIs). I looked over the blessed HTTP error codes but none of the 400-417 range seems right to report application specific errors. So at first I was tempted to return my application error with 200 OK and a specific XML payload (ie. Pay us more and you'll get the storage you need!) but I stopped to think about it and it seems to soapy (/shrug in horror). Besides it feels like I'm splitting the error responses into distinct cases, as some are http status code driven and other are content driven.

So what is the industry recommendations? Good practices (please explain why!) and also, from a client pov, what kind of error handling in the REST API makes life easier for the client code?

A great resource to pick the correct HTTP error code for your API: http://www.codetinkerer.com/2015/12/04/choosing-an-http-status-code.html

An excerpt from the article: 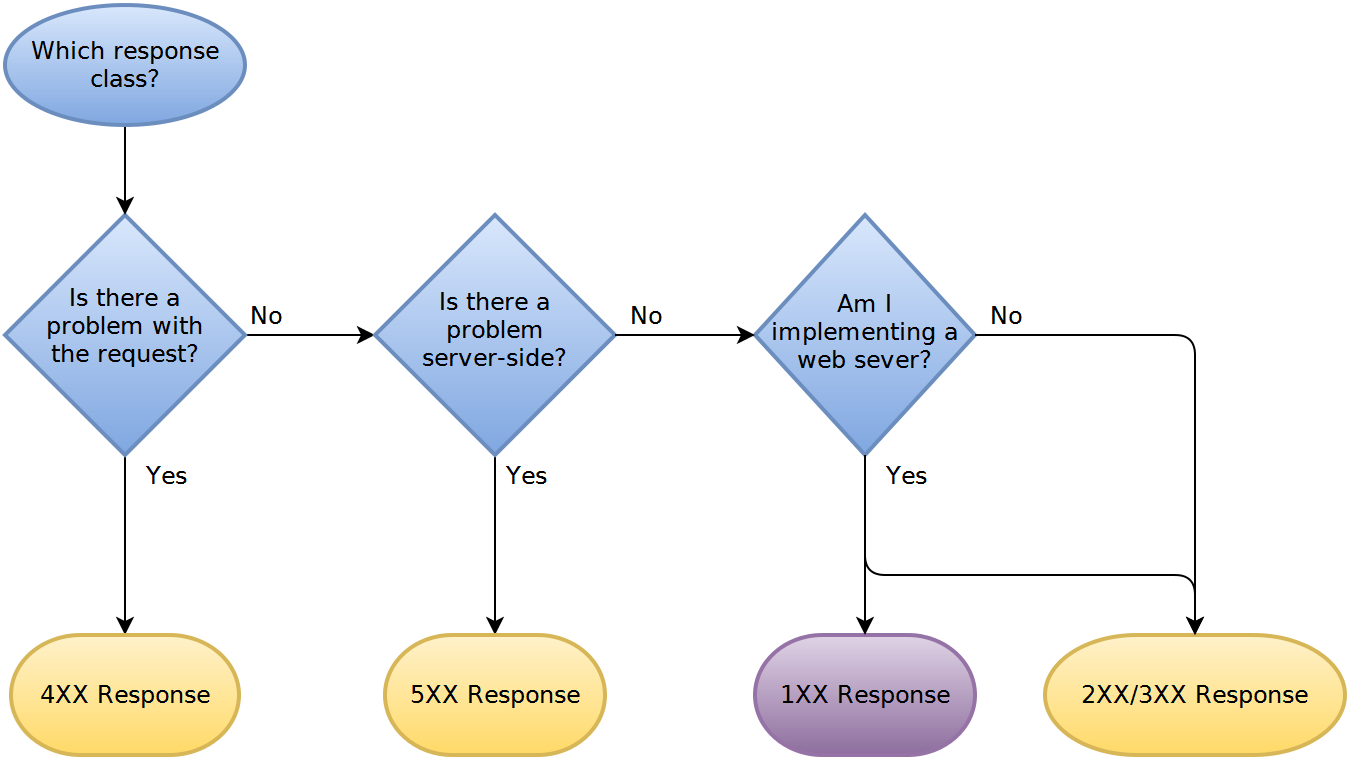 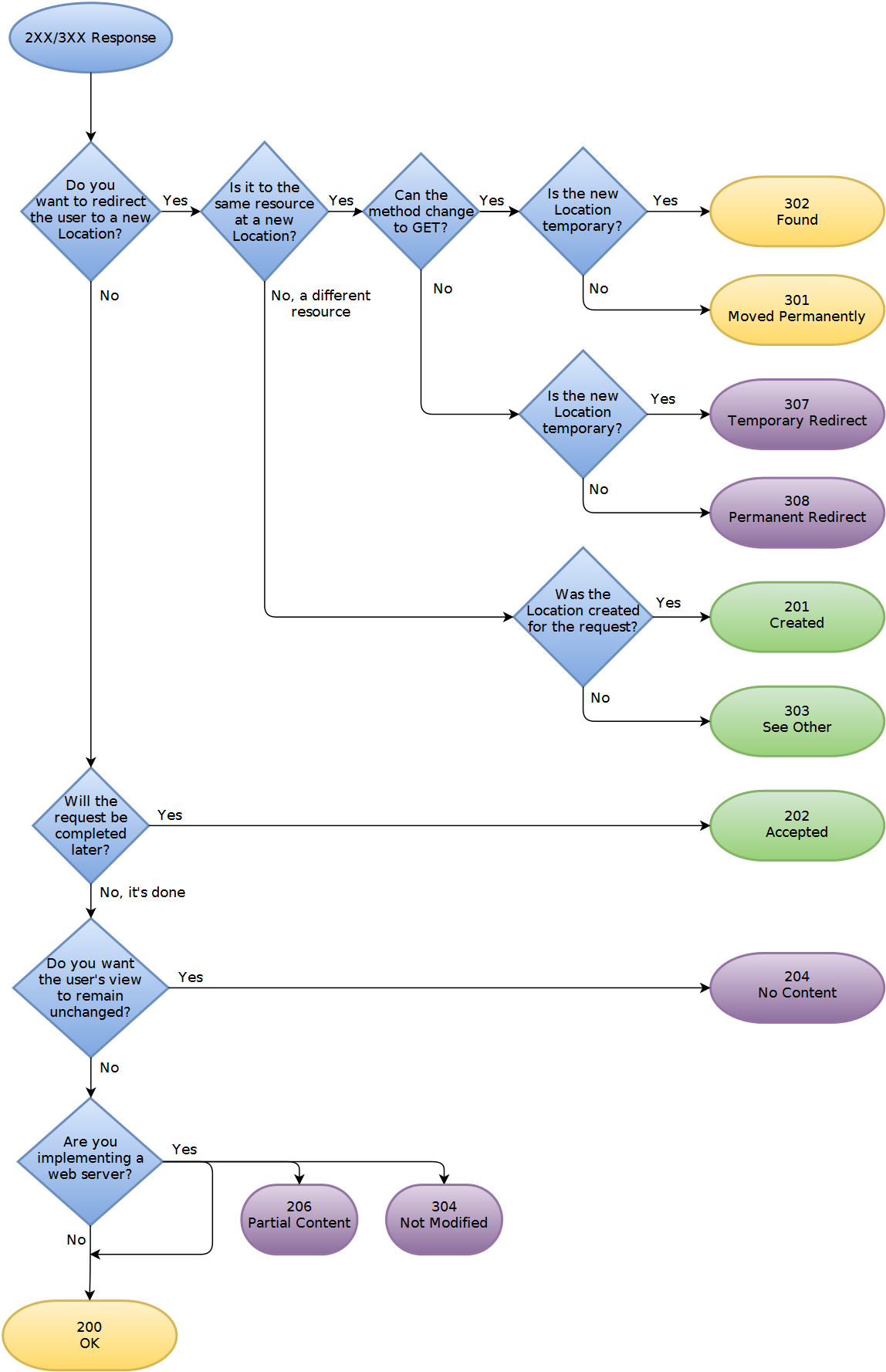 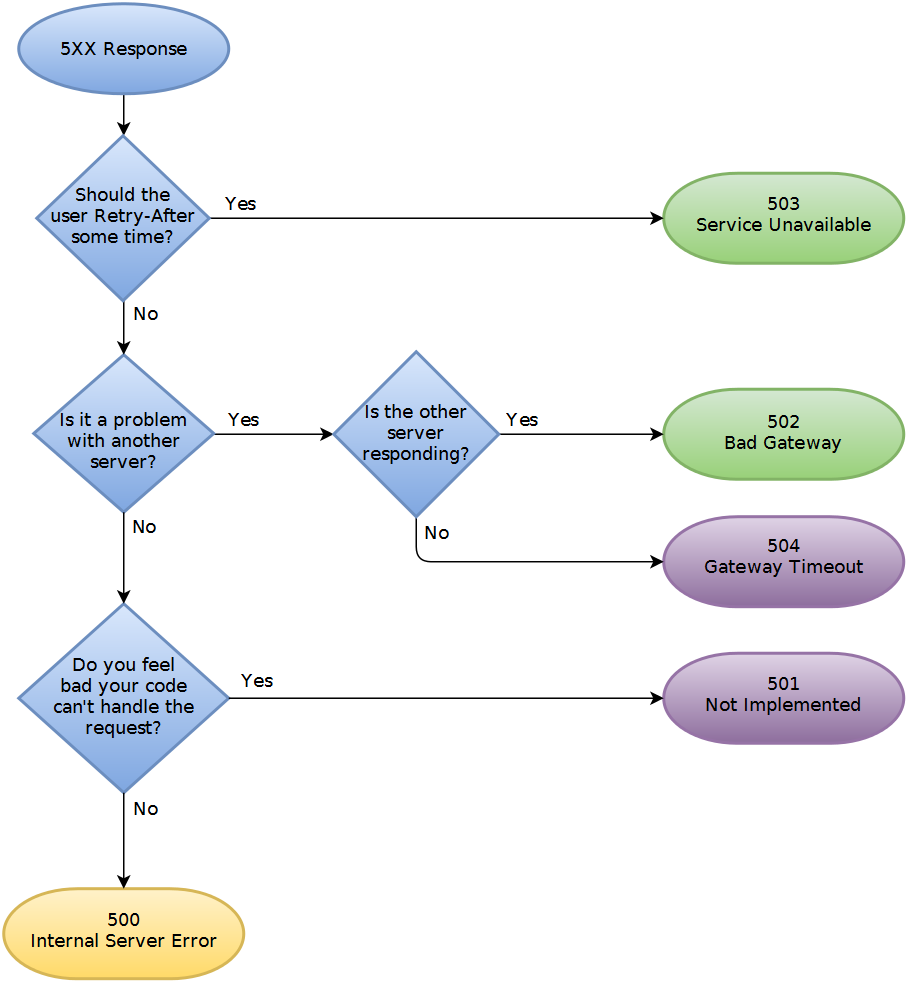 So at first I was tempted to return my application error with 200 OK and a specific XML payload (ie. Pay us more and you'll get the storage you need!) but I stopped to think about it and it seems to soapy (/shrug in horror).

I wouldn't return a 200 unless there really was nothing wrong with the request. From RFC2616, 200 means "the request has succeeded."

If the client's storage quota has been exceeded (for whatever reason), I'd return a 403 (Forbidden):

The server understood the request, but is refusing to fulfill it. Authorization will not help and the request SHOULD NOT be repeated. If the request method was not HEAD and the server wishes to make public why the request has not been fulfilled, it SHOULD describe the reason for the refusal in the entity. If the server does not wish to make this information available to the client, the status code 404 (Not Found) can be used instead.

This tells the client that the request was OK, but that it failed (something a 200 doesn't do). This also gives you the opportunity to explain the problem (and its solution) in the response body.

What other specific error conditions did you have in mind?

The main choice is do you want to treat the HTTP status code as part of your REST API or not.

Both ways work fine. I agree that, strictly speaking, one of the ideas of REST is that you should use the HTTP Status code as a part of your API (return 200 or 201 for a successful operation and a 4xx or 5xx depending on various error cases.) However, there are no REST police. You can do what you want. I have seen far more egregious non-REST APIs being called "RESTful."

The HTTP Status code is part of your api

The HTTP Status code is NOT part of your api

Remember there are more status codes than those defined in the HTTP/1.1 RFCs, the IANA registry is at http://www.iana.org/assignments/http-status-codes. For the case you mentioned status code 507 sounds right.

As others have pointed, having a response entity in an error code is perfectly allowable.

Do remember that 5xx errors are server-side, aka the client cannot change anything to its request to make the request pass. If the client's quota is exceeded, that's definitly not a server error, so 5xx should be avoided.

I know this is extremely late to the party, but now, in year 2013, we have a few media types to cover error handling in a common distributed (RESTful) fashion. See "vnd.error", application/vnd.error+json (https://github.com/blongden/vnd.error) and "Problem Details for HTTP APIs", application/problem+json (https://datatracker.ietf.org/doc/html/draft-nottingham-http-problem-05).

There are two sorts of errors. Application errors and HTTP errors. The HTTP errors are just to let your AJAX handler know that things went fine and should not be used for anything else.

However, how you design your application errors is really up to you. Stack Overflow for example sends out an object with response, data and message properties. The response I believe contains true or false to indicate if the operation was successful (usually for write operations). The data contains the payload (usually for read operations) and the message contains any additional metadata or useful messages (such as error messages when the response is false).

Agreed. The basic philosophy of REST is to use the web infrastructure. The HTTP Status codes are the messaging framework that allows parties to communicate with each other without increasing the HTTP payload. They are already established universal codes conveying the status of response, and therefore, to be truly RESTful, the applications must use this framework to communicate the response status.

Sending an error response in a HTTP 200 envelope is misleading, and forces the client (api consumer) to parse the message, most likely in a non-standard, or proprietary way. This is also not efficient - you will force your clients to parse the HTTP payload every single time to understand the "real" response status. This increases processing, adds latency, and creates an environment for the client to make mistakes.

Modeling your api on existing 'best practices' might be the way to go. For example, here is how Twitter handles error codes https://developer.twitter.com/en/docs/basics/response-codes

Please stick to the semantics of protocol. Use 2xx for successful responses and 4xx , 5xx for error responses - be it your business exceptions or other. Had using 2xx for any response been the intended use case in the protocol, they would not have other status codes in the first place.

Don't forget the 5xx errors as well for application errors.

In this case what about 409 (Conflict)? This assumes that the user can fix the problem by deleting stored resources.

Otherwise 507 (not entirely standard) may also work. I wouldn't use 200 unless you use 200 for errors in general.

If the client quota is exceeded it is a server error, avoid 5xx in this instance.

Not the answer you're looking for? Browse other questions tagged web-services http rest or ask your own question.