Question Specific
What is the best strategy given the resources I have to identify the algorithm being used?

Resources
full example file
extracted binary from the field I am interested in
decrypted data In this zip archive there is a binary list of floats representing x,y,z (model2.vertices) and a binary list of integers (model2.faces). I have also included an "stl" file which you can view with many free programs but because of the weird way the data is stored in STL's, this is not what we expect to come out of the original file.

Progress
1. I disassembled the program with Olly, then did the only thing I know how to do at this poing and "searched for all referenced text" after pausing the porgram right before it imports of of the files. Then I searched for words stings like "crypt, hash, AES, encrypt, SHA, etc etc." I came up with a bunch of things, most notably "Blowfish64" which seems to go nicely with the fact that mydata occasionally is 4 bytes too long (and since it is guranteed to be mod 12 = 0) this to me looks like padding for 64 bit block size (odd amounts of vertices result in non mod 8 amounts of bytes). I also found error messages like...

After reading Igor's response below, here is the output from signsrch. I've updated this image with green dot's which cause no problems when replaced by int3, red if the program can't start, and orange if it fails when loading a file of interest. No dot means I haven't tested it yet. 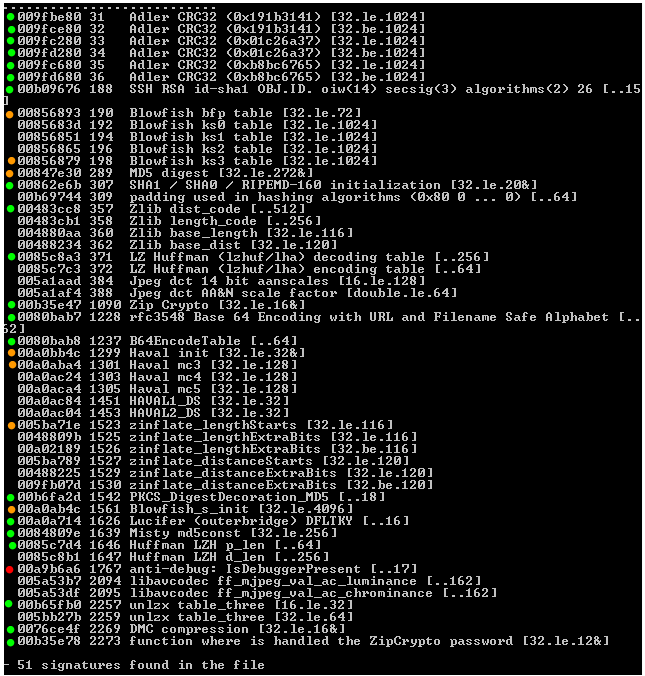 encryption reverse-engineering disassembly
share|improve this question
edited May 23 '17 at 12:10

Many encryption algorithms use very specific constants to initialize the encryption state. You can check if the binary has them with a program like signsrch. If you get any plausible hits, open the file in IDA and search for the constants (Alt-B (binary search) would help here), then follow cross-references to try and identify the key(s) used.

You can't differentiate good encryption (AES with XTS mode for example) from random data. It's not possible. Try using ent to compare /dev/urandom data and TrueCrypt volumes. There's no way to distinguish them from each other.

Edit: Re-reading your question. The best way to determine which symmetric algorithm, hash and mode is being used (when you have a decryption key) is to try them all. Brute-force the possible combinations and have some test to determine if you do successfully decrypt. This is how TrueCrypt mounts a volume. It does not know the algo beforehand so it tries all the possibilities and tests that the first few bytes decrypt to TRUE.

Not the answer you're looking for? Browse other questions tagged encryption reverse-engineering disassembly or ask your own question.