Attempting to use a custom hex color for my css triangle (border). However since it uses border properties I am unsure how to go about doing this. I would like to steer clear of javascript and css3 simply because of compatibility. I am trying to have the triangle have a white background with a 1px border (around the angled sides of the triangle) with color #CAD5E0. Is this possible? Here's what I have so far:

You actually have to fake it with two triangles.... 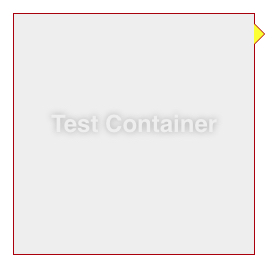 I know you accept that but check this one also with less css:

I think this is a simpler one using clip-path:

Another way to accomplish this, especially for somebody who needs this to work with equilateral or even scalene triangles like I did, is to use filter: drop-shadow(...) with multiple values and no blur radius. This has the added benefit of not needing multiple elements, or access to both :before and :after (I was trying to accomplish this with :after content that was inline, so wanted to avoid absolute positioning too).

For the above case, the :after's CSS could look like this (fiddle):

I think there are some limitations or weirdness, though:

Notice the funniness that the first one (green) gets applied once, but the second one (red) is getting applied both to the yellow triangle created via border as well as the green drop-shadow(), and the last one (blue) gets applied to all of the above. (Perhaps that's also related to the .5px appearance thing).

But I guess you can take advantage of these drop-shadows building on each other if you need something wider-looking than 1px, by changing them to something like the following (fiddle):

where the very first one has a blur-radius set (2.5px in this case, though the result appears multiplied), and all the rest have blur at 0. But this will only work for the same color on all sides, and it results in some rounded-looking corners as well as quite rough edges the bigger you go.

Not the answer you're looking for? Browse other questions tagged css border css-shapes or ask your own question.

3566
Set cellpadding and cellspacing in CSS?
3776
Is there a CSS parent selector?
4233
Change a HTML5 input's placeholder color with CSS
2598
How can I transition height: 0; to height: auto; using CSS?
1967
How do CSS triangles work?
923
Remove blue border from css custom-styled button in Chrome
3057
Is it possible to apply CSS to half of a character?