Is there a way to remove the authorization prompt from command-line instances of Instruments (Xcode)?

I am currently using Instruments via a bash script to initiate the command-line interface to start up runs of the Automation plug-in.

With 4.2, this worked well enough, however with the upgrade to Xcode 4.3, I am now being prompted for an authorized user to 'analyze other processes'. No user is ever actually authenticated, even if the correct credentials are granted. I get the following error:

Even with the authentication failure, the Automation plug-in executes, however this requires my script to have a physical babysitter enter credentials, which in many ways defeats the purpose of these command-line runs. Is it possible to add the user details as arguments? Or is there some other way to skip over this prompt without requiring a person at the keys?

This authorization dialog appears when you try to run UIAutomation tests from the GUI for the first time. 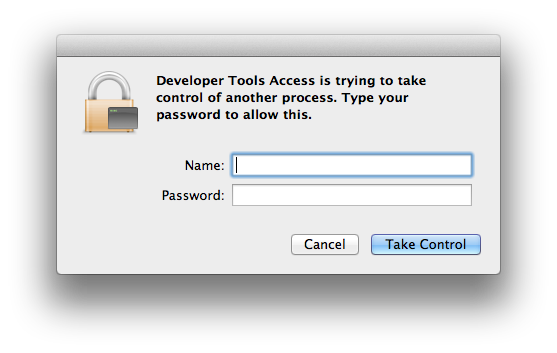 Once the authorization dialog has been answered in the GUI, the prompts stop appearing on the command-line. This kind of work-around doesn't seem valid as an 'answer' though.

Here's a wonderful command that may work for you:

It's the command-line way to gain access to a keychain on the Mac. I haven't tested it with Automation, but it's how I've integrated my iOS builds with Jenkins.

Okay I think I got it working.

What I did was the following:

Adding to Alexander's answer, I found that for Mavericks, because of the way authorizations are handled (source), you should do this:

I am running zucchini functional tests through a Jenkins job in a VMWare VM, and the slave couldn't launch properly the simulator and would hang on the splash screen, probably because of incorrect authorisations. This helped me solve this issue, hope it helps others.

The user your script runs as has to be authorized to use the developer tools. You can do this two ways:

These two things are two of the four or five secrets to using UIAutomation with Jenkins.

I compared /etc/authorization file before and after upgrading to xCode 4.3. Apple replaced two keys:

I edited /etc/authorization, added missing keys below new one and issue from console is solved. Unfortunately GUI prompt is still there.

Hope this will point you to solve whole issue

I also faced with this issue on El Capitan. I found this article very helpful https://www.dssw.co.uk/reference/authorization-rights/. Based on it I changed following rights in order to overcome this issue:

This is the solution worked for me :

I also tried security unlock-keychain and changed the /etc/authorization file, and have DevToolsSecurity enabled, but none of them worked, until I launched the Instruments GUI app and run my script, from which it popped up a dialog and i entered my password, after then when i run the instruments script again it doesn't require password anymore!

In Xcode - if you load up organizer (Xcode->Window->Organizer)

Then select your machine under devices -> 'Enable Developer Mode'

This should remove the need for prompts with instruments.

I tried security unlock-keychain and editing the /etc/authorization file, but neither of those worked.

In the end the only thing that removed that security prompt was what jacekmigacz suggested in a comment, to run "sudo DevToolsSecurity --enable".

Not the answer you're looking for? Browse other questions tagged ios instruments xcode4.3 ios-ui-automation xcode-instruments or ask your own question.