Combined plot of ggplot2 (Not in a single Plot), using par() or layout() function? [duplicate]

I've been thinking of using par() or layout() functions for combining ggplots. Will it be possible to use those functions?

Say I want to plot ggplot for scatterplot and ggplot for histogram. And I want to combine the two plots (NOT IN A SINGLE PLOT). Is it applicable?

I tried it with simple plotting in R, without using the ggplot functions. And it works actually.

But when I try to use ggplot, and combine the plot, I don't get an output.

A utility I think deserves more attention for this is the layOut formerly of th wq package (note the capital "O"). It's since been removed from the wq package, so I've put the code below and renamed it lay_out to match typical ggplot style. It is like base::layout in that the plots can be of varying sizes, laid out in rows and columns. Each argument to lay_out is a 3-element list consisting of the plot, the row indices in which to plot it, and the column indices in which to plot it. 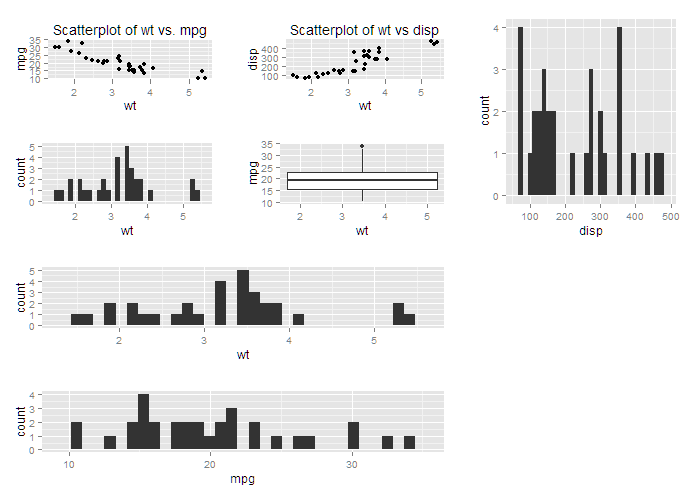 (Code sourced from a prior version of the wq package, from the commit history on the unofficial Github CRAN mirror.)

The answer involving grid.layout works, I've used it, and I up-voted it. However, I usually find this solution much too tedious and error-prone, and I suspect most ggplot2 enthusiasts that do this regularly have wrapped this up in a function. I have found several such wrapping functions in previous searches, but my current workhorse solution is in a grid addon package called gridExtra. It has useful arguments, but the default rows/columns setup is often what you wanted in the first place:

Notice how the actual "combine my plots into one graphic" code was one line (after loading gridExtra). You might argue that putting the plots into a list was an extra line, but actually I could have alternatively used

For small numbers of ggplots this might be preferable. However, for n_plots > 4 you will begin to resent having to name and type them all.

Not the answer you're looking for? Browse other questions tagged r layout ggplot2 par or ask your own question.

25
Creating arbitrary panes in ggplot2
0
Embedding output from ggplot into another plot
22
Multiple ggplots of different sizes
3
combine multiple plots to a gif
0
Layout for multiple ggplot2 plots when some are centered
3
Is there a way to turn a ggpairs() plot into a ggplot2 object?
0
multiple plots with ggplots plotted in sequence without using the graphics position