Ioc/DI - Why do I have to reference all layers/assemblies in application's entry point?

(Related to this question, EF4: Why does proxy creation have to be enabled when lazy loading is enabled?).

I'm new to DI, so bear with me. I understand that the container is in charge of instantiating all of my registered types but in order to do so it requires a reference to all of the DLLs in my solution and their references.

If I weren't using a DI container, I wouldn't have to reference the EntityFramework library in my MVC3 app, only my business layer, which would reference my DAL/Repo layer.

I know that at the end of the day all DLLs are included in the bin folder but my problem is having to reference it explicitly via "add reference" in VS in order to be able to publish a WAP with all necessary files.

If I wasn't using a DI container, I wouldn't have to reference EntityFramework library in my MVC3 app, only my business layer which would reference my DAL/Repo layer.

With tightly coupled code, each library may only have a few references, but these again have other references, creating a deep graph of dependencies, like this: 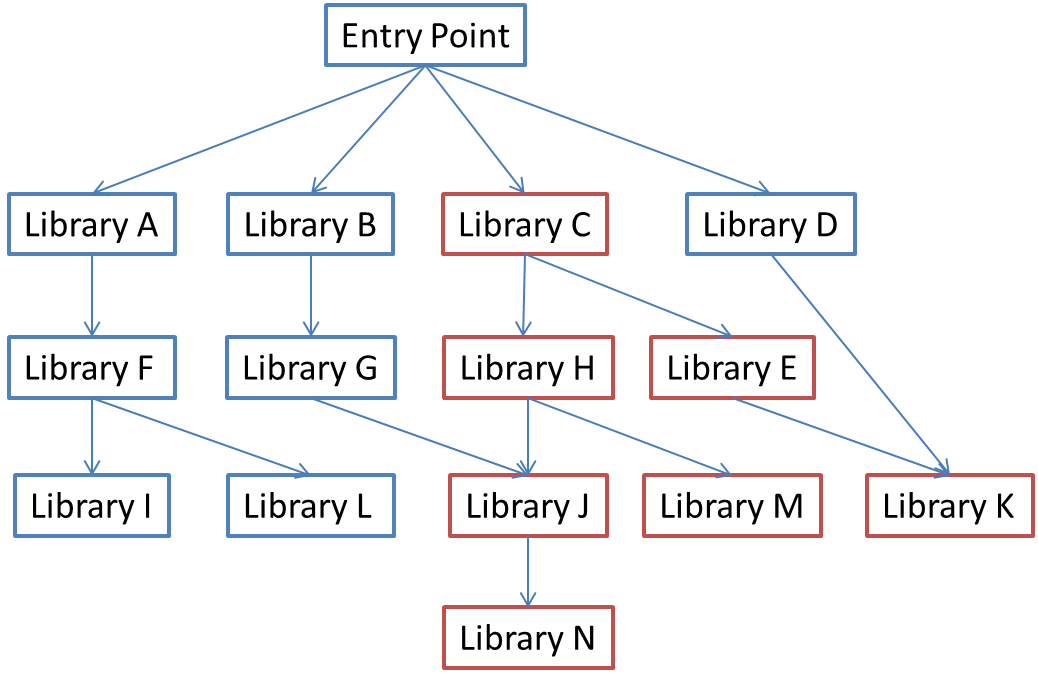 Because the dependency graph is deep, it means that most libraries drag along a lot of other dependencies - e.g. in the diagram, Library C drags along Library H, Library E, Library J, Library M, Library K and Library N. This makes it harder to reuse each library independently from the rest - for example in unit testing.

However, in a loosely coupled application, by moving all the references to the Composition Root, the dependency graph is severely flattened:

As illustrated by the green color, it's now possible to reuse Library C without dragging along any unwanted dependencies.

However, all that said, with many DI Containers, you don't have to add hard references to all required libraries. Instead, you can use late binding either in the form of convention-based assembly-scanning (preferred) or XML configuration.

When you do that, however, you must remember to copy the assemblies to the application's bin folder, because that no longer happens automatically. Personally, I rarely find it worth that extra effort.

A more elaborate version of this answer can be found in this excerpt from my book Dependency Injection, Principles, Practices, Patterns.

If I wasn't using an DI container, I wouldn't have to reference EntityFramework library in my MVC3 app

Even when using a DI container, you don't have to let your MVC3 project reference Entity Framework, but you (implicitly) choose to do this by implementing the Composition Root (the startup path where you compose your object graphs) inside your MVC3 project. If you are very strict about protecting your architectural boundaries using assemblies, you can move your presentation logic to a different project.

Extracting the presentation logic to a class library can complicate things when working with MVC. It will be harder to wire everything up, since controllers are not in the startup project (while views, images, CSS files, must likely stay in the startup project). This is probably doable but will take more time to set up.

Because of the downsides I generally advice to just keep the Composition Root in the web project. Many developers don’t want their MVC assembly to depend on the DAL assembly, but that should not be a problem. Don't forget that assemblies are a deployment artifact; you split code into multiple assemblies to allow code to be deployed separately. An architectural layer on the other hand is a logical artifact. It's very well possible (and common) to have multiple layers in the same assembly.

Of course, when you do this, you're losing the ability for the compiler to check this architectural rule at compile time. But most architectural rules actually can't be checked by the compiler. In case you're afraid your team won't follow the architectural rules, I'd advise introducing code reviews, which is an important practice to increase code quality, consistency and improve the skills of a team. You can also use tools like NDepend (which is commercial), which help you verifying your architectural rules. When you integrate NDepend with your build process, it can warn you when somebody checked code in that violates such architectural rule.

You can read a more elaborate discussion on how the Composition Root works in chapter 4 of my book Dependency Injection, Principles, Practices, Patterns.

If I wasn't using an DI container, I wouldn't have to reference EntityFramework library in my MVC3 app, only my business layer which would reference my DAL/Repo layer.

You can create a seperate project called "DependencyResolver". In this project you have to reference all your libraries.

Now the UI Layer doesn't need NHibernate/EF or any other not UI relevant library except of Castle Windsor to be referenced.

If you want to hide Castle Windsor and DependencyResolver from your UI layer you could write an HttpModule which calls the IoC registry stuff.

I have only an example for StructureMap:

The GetController delegate is set in a StructureMap Registry (in Windsor it should be an Installer).

Not the answer you're looking for? Browse other questions tagged dependency-injection inversion-of-control castle-windsor or ask your own question.

6
Dependency Injection and project references
2
Is my DI architecture correct when my composite root references the data layer?
4
ASP.NET Core Dependency Injection without referencing implementations
0
DI/IoC MVC Assembly Reference issues and abstraction
0
IoC and static binding of dependencies
1
Architecture using Ninject+DbContext+Service+MVC: How to inject DbContext into Service?
0
When using Dependency Injection, is it expected that an assembly implementing a "Composition Root" should reference all dependent assemblies directly?
1
How to use Castle Windsor with multiple projects in a solution
0
Onion architecture with IoC on the client
0
Managing dependency inheritance in .NET Core
See more linked questions

6
Where to store Ninject IKernel in a web application?
1
Chaining layers with IoC, setting lower callback to upper and avoid circular reference
2
DI with Repository and Services in different DLLs, keeping separation of concerns
3
Register a container (IoC) in a class library?
1
IOC container trying to reference DbContext
0
Why examples of IOC have only OneInterface : OneClass ratio?
1
web forms, autofac, EF newing up models?
1
Unity does not find referenced Dll's