Renaming a branch in GitHub

but this only renames the local version of the branch. How can I rename the one on GitHub?

As mentioned, delete the old one on GitHub and re-push, though the commands used are a bit more verbose than necessary:

Dissecting the commands a bit, the git push command is essentially:

So doing a push with no local_branch specified essentially means "take nothing from my local repository, and make it the remote branch". I've always thought this to be completely kludgy, but it's the way it's done.

As of Git 1.7 there is an alternate syntax for deleting a remote branch:

As mentioned by @void.pointer in the comments

Note that you can combine the 2 push operations:

This will both delete the old branch and push the new one.

This can be turned into a simple alias that takes the remote, original branch and new branch name as arguments, in ~/.gitconfig:

Note that positional arguments in shell commands were problematic in older (pre 2.8?) versions of Git, so the alias might vary according to the Git version. See this discussion for details.

The following commands worked for me:

I've found three commands on how you can change your Git branch name, and these commands are a faster way to do that:

If you need step-by-step you can read this great article:

How to Rename Git Local and Remote Branches

If you are on the branch you want to rename:

If you are on a different branch:

3. Reset the upstream branch for the new-name local branch.

Switch to the branch and then:

So the conclusion is:

You can do that without the terminal. You just need to create a branch with the new name, and remove the old after.

In your repository’s branch selector, just start typing a new branch name. It’ll give you the option to create a new branch:

It’ll branch off of your current context. For example, if you’re on the bugfix branch, it’ll create a new branch from bugfix instead of master. Looking at a commit or a tag instead? It’ll branch your code from that specific revision.

As an added bonus, it’ll also give you a link to the branch’s Pull Request, if it has one.

I just copy and paste this content from: Create and delete branches

Just remove the old branch and create new one.

You also probably should rename local branch and change settings for where to push/pull.

On GitHub side, you can use the new (Jan. 2021) "Support for renaming an existing branch" (protected branches can only be renamed by admins, see the end) 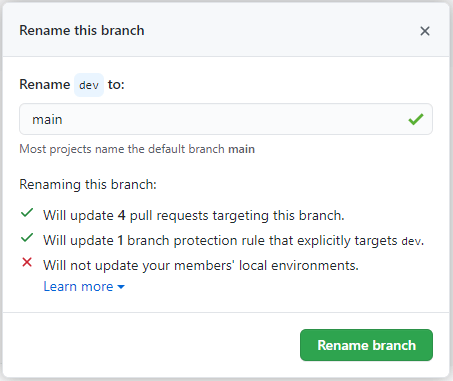 See "How do I rename branch on the GitHub website?".

This is a better approach, because renaming a branch that way (on github.com) will (source):

Now, only admins can rename branches that are protected by branch protection rules.

GitHub allows repository collaborators to rename every branch in a repository, with the exception of the default branch.

When a collaborator renames a branch, any non-wildcard branch protection rules that apply to that branch are also changed to match the branch's new name.

Because only admins can modify branch protection rules, renaming of a protected branch is now limited to admin users.

Simple as that. In order to rename a Git branch locally and remotely use this snippet (tested and works like a charm):

Git reference: With a -m or -M option, <oldbranch> will be renamed to <newbranch>. If <oldbranch> had a corresponding reflog, it is renamed to match <newbranch>, and a reflog entry is created to remember the branch renaming. If <newbranch> exists, -M must be used to force the rename to happen.

Git reference: --set-upstream For every branch that is up to date or successfully pushed, add upstream (tracking) reference, used by argument-less git-pull[1] and other commands. For more information, see branch.<name>.merge in git-config[1].

Here is what worked for me:

You get an error doing git push origin :old_branch because old_branch you are trying to delete might be the default branch.

Just do the other 2 steps and then goto github and change the default branch from the settings, then you will be able to do git push origin :old_branch.

Another way is to rename the following files:

Rename head and remotes both on your local PC and on origins(s)/remote server(s).

If your current branch-name contains slashes (/) Git will create the directories like so:

Branch is now renamed from awe/some/branch to new-branch-name (local and remote!)

Directories in branch-name got removed.

Information: This way might not be the best, but it still works for people who might have problems with the other ways

You can rename a branch with the GitHub REST API.

And you can easily run API commands via the gh CLI all like this:

This article shows how to do it real easy.

In my case, I needed an additional command,

to get my renamed branch to push up to origin newname.

(For ease of typing), I first git checkout oldname. Then run the following:

This extra step may only be necessary because I (tend to) set up remote tracking on my branches via git push -u origin oldname. This way, when I have oldname checked out, I subsequently only need to type git push rather than git push origin oldname.

If I do not use the command git branch --unset-upstream before git push origin newbranch, git re-creates oldbranch and pushes newbranch to origin oldbranch -- defeating my intent.

The following commands rename the branch locally, delete the old branch on the remote location and push the new branch, setting the local branch to track the new remote:

On the Git branch, run:

This will modify the branch name on your local repository:

This will push the modified name to the remote and delete the old branch:

It sets the local branch to track the remote branch.

This solves the issue.

Not the answer you're looking for? Browse other questions tagged git github branch rename or ask your own question.

1085
How do I rename both a Git local and remote branch name?
305
Git alias with positional parameters
146
Renaming a branch while on pull request
55
How do I rename branch on the GitHub website?
2
Renaming branch in github
0
Git branch automatically renames on push
0
How to delete or replace master branch in github?
1
Unable to rename git branch to "master", pushes to remote with incorrect name