I try to use Hebrew characters in a Matlab figure plot on my Ubuntu to no avail. I tried:

similar to what was proposed in the answer to this question. I got garbled text (see attached image).

I also have access to a remote computer via ssh, with version R2011a. That didn't work either. (There I had to slCharacterEncoding('UTF-8'))

The other option, using a javax.swing.JLabel component, is too difficult to use with the amount of graphing I have.

I can continue producing graphs with English axes and titles, but that's a pity. Any advice?

Edit: as suggested by Egon, if I can print -deps and then replace the text (from code within Matlab) in the resulting EPS file, that's pretty cool too. But I don't know how to place Unicode in EPS and I think that's stretching it... 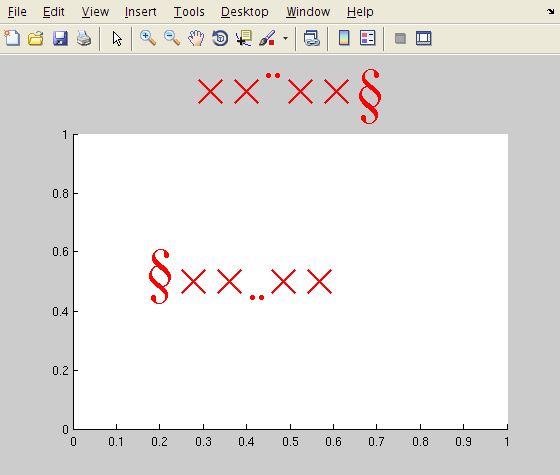 Yet another edit: I'm starting to think this is an X-server issue. Though different, I wouldn't be surprised if these issues are related:

I tried uninstalling Ubuntu supplied NVidia drivers (I have an 9300GS card) and re-installing NVidia supplied ones (v295). I tried changing DPI in xorg.conf to "100 x 100". Installed all packages listed in HebrewLocalizationHowto and then some. Nothing worked. Suggestions?

Another edit Fonts located under matlab/sys/fonts/ttf or matlab/sys/fonts/type1 aren't rendered correctly. When I edit the figure and double click the title, I see the characters are there, but when I finish editing it returns to the bad rendering. Also, the JLabel solution for rendering Unicode characters suggested here renders text correctly under the same figure.

Another edit Matlab R2011a exhibits the same issue. Here's the output of listfonts

Have you tried disabling the text interpreter?

So either adding 'interpreter', 'none' as the last few arguments of your call to text or setting this for the entire figure set(gcf,'defaulttextinterpreter','none'). To apply that globally, just replace gcf by 0 (that is the root window).

If that doesn't work, you might try the LateX interpreter (replace none by 'latex' above), which might have support for Hebrew characters.

On the other hand, but this is a personal preference, English labels allow (virtually) anyone to read your figures which only allows you to exchange ideas with other people.

edit As said in the question you referenced, it is a font problem, not a MATLAB problem. I tried it here on my Arch install (which has its fonts problems of its own), but I can get it to display your Hebrew characters just fine using the Arial font. 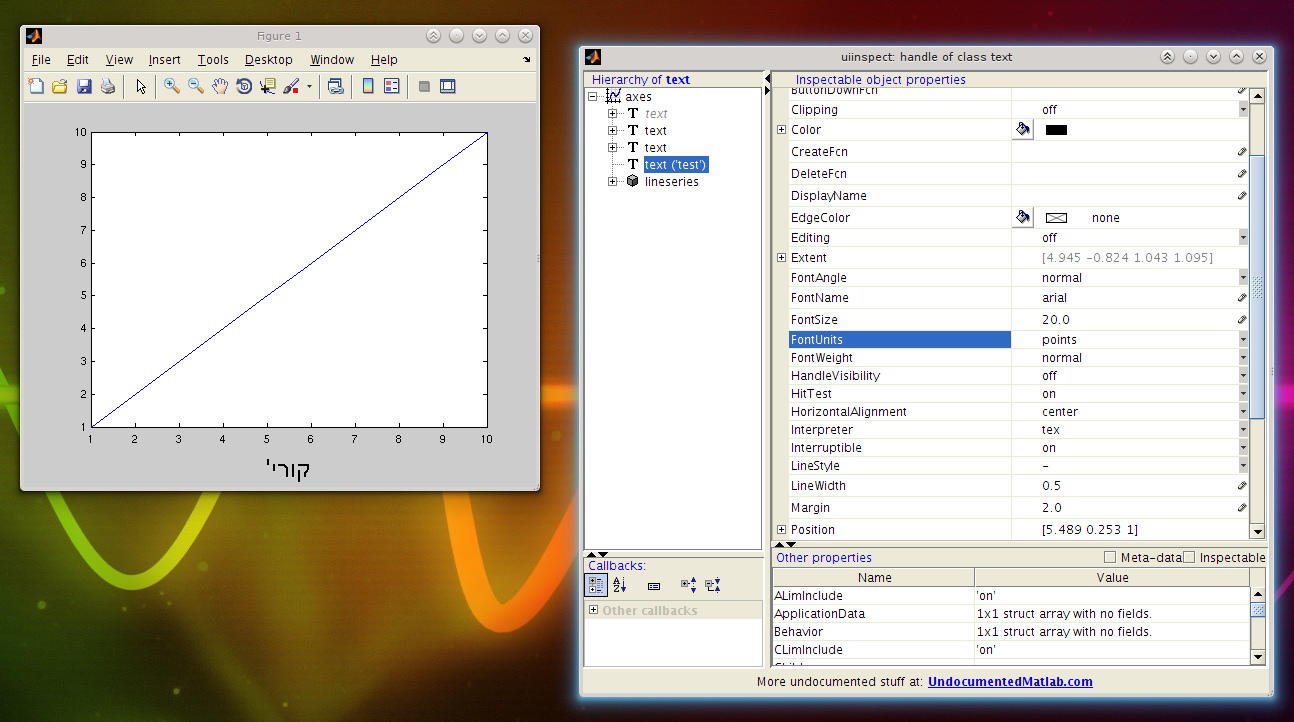 edit 2 Again, this is a font problem, not MATLAB. I again tried this on my Arch install, and now Hebrew works fine with your first code. So I assume the fonts you have installed are not the right versions. 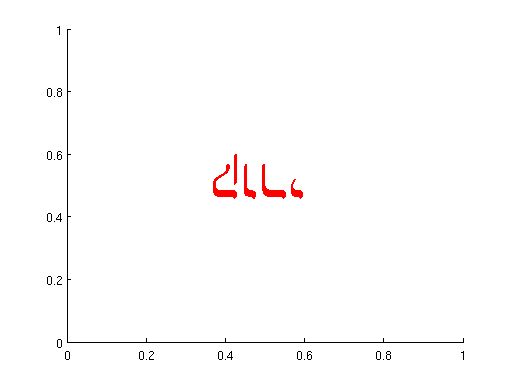 On Arch, I have these font-related packages installed:

For Ubuntu, I don't remember the correct packages, but I guess you'd have the highest chances of success with ttf-liberation, ttf-ms-conts (msttcorefonts in Ubuntu), xorg-fonts-100dpi, xorg-fonts-alias or their Debian/Ubuntu counterparts.

So I think there are two possible solutions: either try another font. Arial worked for me before, Times New Roman now also works for me. Or install the proper fonts on your computer.

edit On this end, it seems that rendering in MATLAB works almost perfectly. However, export to PDF doesn't work. Any bitmap formats should work fine.

My next guess, is indeed that for the PDF case, MATLAB is to blame. I did some tests by using the regular PDF save and printing to a file. Both exhibit the same problem. This is not surprising, since the PDF save feature in MATLAB seems to generate PS which is converted to PDF afterwards. Presumably, there is something rotten and unicode incompatible going on in the PS generation.

I know it is not a complete solution to your problem, but you can at least export your figures into PNG, if your resolution is high enough, most people won't notice.

Another solution, if you use LaTeX to generate your report, is to use matlab2tikz to generate your figures, there I was able to get the Hebrew text to be inserted into LaTeX code. However, since I don't have experience with Hebrew in my TeX files, I don't know the tricks to get that to compile.

Using the following snippet you can see which fonts work easily

For me Lucida Sans worked. However it will display Hebrew reversed.

You can export to EPS (print -deps -- I have found this to be unavailable in Windows; then again, you don't have the problem there) and do some modifications:

That is, change this:

(The encoding section can be copies as-is; and the \327 occurences were removed)

This works, except that for some reason one final character doesn't display correctly. It's good enough for me.

Not the answer you're looking for? Browse other questions tagged matlab unicode plot hebrew figure or ask your own question.

11
Displaying hebrew text on screen
9
Is it possible to print unicode text or characters in MATLAB?
3
How should I setup MATLAB for correct display of Russian (Cyrillic) characters on figures in Linux?
1
How a save figure as an eps file with Chinese characters inside in matlab

11
Is it possible to display unicode in MATLAB plot labels?
7
jQuery doesn't display Hebrew
0
Plot on the same figure in Matlab
7
how to plot matlab figure inside winform application?
1
Generate Matlab Plot Code from Figure Editor
0
Plot many functions in single figure in Matlab
1
How to turn off figure display while running plot scripts
0
Plot 3D figure in matlab
3
Accesing the figure inside the figure to add new plot in MATLAB
0
Matlab nonlinear 2D figure plot