How to run scala code on Intellij Idea 11?

I am new to intellij idea and I decided to shift because I found the scala plugin on eclipse to be annoyingly buggy. But, intellij idea, which I have heard to be very good, looks difficult to use. I looked through the getting started with scala plugin page but couldn't find documentation specific to the latest version of lightweight ide of intellij idea 11 for scala.

I have created a project and made a hello world object in scala but I am not able to run it. On trying to run it, it shows the scala interpreter (type in expressions to get them evaluated). I don't exactly understand what changes to make in the project structure to be able to run scala code. As of now, i added the jsdk to point to my $JAVA_HOME and the scala library is also added. The scala plugin is also working in that syntax highlighting etc is fine.

The intellij idea user interface is also not very friendly and I don't get how to run the code. What modules am I supposed to add? Also, does compiled scala code run with jvm? I'll be grateful to anyone who helps out.. I have been putting off writing scala code because I am not able to find THE IDE.

EDIT: Thanks for all the help! I am now able to run a basic scala program. I am trying to add external jars. What is the equivalent of doing Project right click-> Configure Build Path -> adding external jar files in eclipse? I tried adding "dependencies " under modules tab in project structure. It's adding the jar files but somehow the classes in the jar files are not still recognised.

With the Scala plugin installed either

this is what your module should look like under project settings 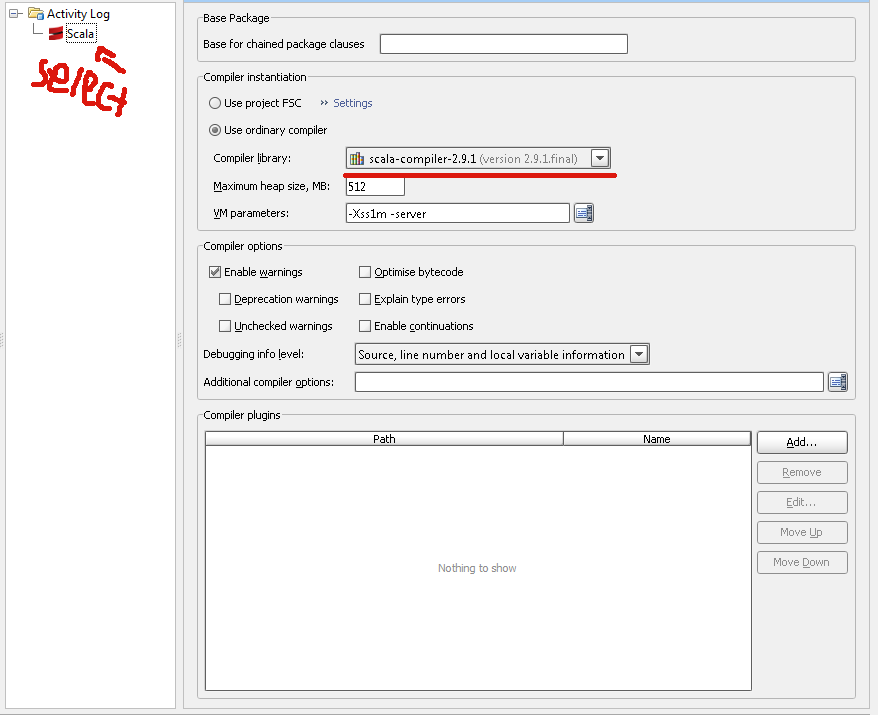 these are the jar files in my scala-compiler lib

and these are the jar files in my scala-library lib

then right click on the class and select Run Classnam.main() and IntelliJ will setup a run configuration for you.

Edit: I can see someone posted somewhat the same I want to say here. I hope this can give a few more in-depths hints, so I will post it anyway :-)

If you would like to run Scala native in IntelliJ (I shifted to IntelliJ and still can't get my hands down) you need to make sure a few things are in order. Most of this happens under File -> Project Structure which requires you to create a project (when you get a hang of it, it is much more logical than Eclipse -- and Netbeans for that matter). I am also assuming you have selected a jdk, but this can also be done in the Project Structure.

Use sbt with sbt-idea plugin to generate idea project files for complex projects.

Add scala nature to the project, and you can right click and run any file extending App.

A good walk-through on how to set up a Scala project in Intellij is located here: http://sonyarouje.com/2011/03/18/running-scala-in-intellij-idea-10/

Not the answer you're looking for? Browse other questions tagged scala intellij-idea or ask your own question.

1367
How can I permanently enable line numbers in IntelliJ?
794
Correct way to add external jars (lib/*.jar) to an IntelliJ IDEA project
147
How to create SBT project with IntelliJ Idea?
635
IntelliJ inspection gives “Cannot resolve symbol” but still compiles code
542
“Default Activity Not Found” on Android Studio upgrade
1
Unable to make IntelliJ Idea 12 work with Scala compiler
126
How to force IntelliJ IDEA to reload dependencies from build.sbt after they changed?
92
How to build an Uber JAR (Fat JAR) using SBT within IntelliJ IDEA?
39
No 'scala-library*.jar' in every new IntelliJ Scala Project