How to find which views are using a certain table in SQL Server (2008)?

I have to add a few columns to a table and I also need to add these columns to all the views that use this table.

Is it possible to get a list of all the views in a database that use a certain table?

This should do it:

You can also try out ApexSQL Search a free SSMS and VS add-in that also has the View Dependencies feature. The View Dependencies feature has the ability to visualize all SQL database objects’ relationships, including those between encrypted and system objects, SQL server 2012 specific objects, and objects stored in databases encrypted with Transparent Data Encryption (TDE)

Disclaimer: I work for ApexSQL as a Support Engineer

If you need to find database objects (e.g. tables, columns, triggers) by name - have a look at the FREE Red-Gate tool called SQL Search which does this - it searches your entire database for any kind of string(s). 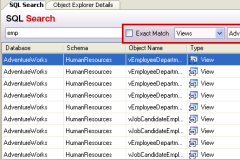 It's a great must-have tool for any DBA or database developer - did I already mention it's absolutely FREE to use for any kind of use??

I find this works better:

Filtering VIEW_DEFINTION inside INFORMATION_SCHEMA.VIEWS is giving me quite a few false positives.

select your table -> view dependencies -> Objects that depend on

1
T-SQL: sp_depends with a cursor