Android: allow portrait and landscape for tablets, but force portrait on phone?

I would like tablets to be able to display in portrait and landscape (sw600dp or greater), but phones to be restricted to portrait only. I can't find any way to conditionally choose an orientation. Any suggestions?

Put this bool resource in res/values as bools.xml or whatever (file names don't matter here):

See this supplemental answer for help adding these directories and files in Android Studio.

Then, in the onCreate method of your Activities you can do this:

Devices that are more than 600 dp in the smallest width direction, or x-large on pre-Android 3.2 devices (tablets, basically) will behave like normal, based on sensor and user-locked rotation, etc. Everything else (phones, pretty much) will be portrait only.

and then set orientation according to that

Supplement to the accepted answer

You can do the following steps in Android Studio to add the res/values-sw600dp and res/values-large directories with their bools.xml files.

First of all, from the Project tab select the Project (rather than Android) filter in the navigator. 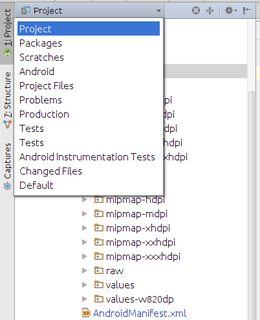 Select Smallest Screen Width, and then press the >> button.

Type in 600 for the smallest screen width. The directory name will be automatically generated. Say OK.

To create the values-large directory, follow the same steps as above, but in this case choose Size rather than Smallest Screen Width. Select Large. The directory name will be automatically generated.

Right click the directory as before to create the bools.xml file.

Here's how I did it (inspired by http://androidblogger.blogspot.com/2011/08/orientation-for-both-phones-and-tablets.html ):

In AndroidManifest.xml , for each activity you want to be able to change between portrait and landscape (make sure you add screenSize - you didn't used to need this!) You don't need to set a screen orientation here. :

Methods to add in each Activity:

and: (if you don't override this method, the app will call onCreate() when changing orientations)

In onCreate() of each Activity :

The only thing I can't seem to figure out is how to to get the app to change layout files when switching from landscape to portrait or vice versa. I assume the answer is doing something similar to what the above link does, but I couldn't get that to work for me - it deleted all my data. But if you have a simple enough app that you have the same layout file for portrait and landscape, this should work.

Following Ginny's answer, I think the most reliable way to do it is as follows:

As described here, put a boolean in resources sw600dp. It must have the prefix sw otherwise it won't work properly:

Then make a method to retrieve that boolean:

And a base activity to extend from the activities where you want this behaviour:

So each activity would extend BaseActivity:

Important: even if you extend from BaseActivity, you must add the line android:configChanges="orientation|screenSize" to each Activity in your AndroidManifest.xml:

Well, this is a bit of late but, here is an XML-Only but a hack solution which does not recreate an activity as setRequestedOrientation does if has to change orientation:

Following accepted answer, I am adding the kotlin file with the solution hope it helps someone

Put this bool resource in res/values as bools.xml or whatever (file names don't matter here):

Then, add it in below lines in your activity or fragmentvity

I recently came across this requirement but didn't want to use any of these solutions. All of them have in common that they call setRequestedOrientation programmatically. The problem with this is it sets the orientation too late and causes slight UI glitches. If your device is in landscape when you launch the app it loads in landscape then rotates. This is particularly noticeable if you use a theme to create a splash screen effect as you will see the background image in the wrong orientation. This can also have a side effect on how your app is shown in the recent apps and issues with configuration change as noted in other answers comments.

Conclusion the correct orientation NEEDS to be set in the manifest so the system knows the orientation without launching your app.

Here is a solution on how to do this (it is quite a bit of effort, but you will sleep better)

First set the orientation in the manifest as a placeholder

We then need to add a normal/tablet flavour to set the value in the app/build.gradle. (Could be achieved with a new build type if your already using flavours)

Now we need to tell the tablet build that it is just for large devices. This can be done by adding a tablet only manifest to merge with the default one. Add a new manifest file at->

Below is all this manifest needs, because it is merged with the default one is ->

The final trick is we need to differentiate builds by version code because the Playstore can not have two uploads with matching codes. We want to make sure the tablet (the more restrictive build) has the higher code. An easy way is to take a base code, then for tablet base * 2 and normal base * 2 - 1. I use CI for this with base code being build number but easy enough to hard code in your flavours.

Now build both flavours to create

Note: only works if distributing via the Google Playstore/Amazon Kindle

Other solutions didn't work for me. I still had some weird orientation problem with dialogs and recreation issues. My solution was to extend the Activity, forcing it as portrait in manifest.

Old question I know. In order to run your app always in portrait mode even when orientation may be or is swapped etc (for example on tablets) I designed this function that is used to set the device in the right orientation without the need to know how the portrait and landscape features are organised on the device.

If you want to do the opposite, you must change the code to landscape (but I think it is clear how to this).

Unfortunately, using the method setRequestedOrientation(...) will cause the activity to restart, so even if you call this in the onCreate method it will go through the activity lifecycle and then it will recreate the same activity in the requested orientation. So at @Brian Christensen's answer you should consider that the activity code might be called twice, this could have bad effects (not only visual, but also at network requests, analytics, etc.).

Furthermore, to set the configChanges attribute in the manifest is in my opinion a big trade-off, which could take massive refactoring cost. Android Devs are not recommending to change that attribute.

Finally, trying to set the screenOrientation somehow different (to avoid the restarting problem) is impossible, statically impossible due to the static manifest which can't be changed, programmatically it is only possible to call that method in the already started activity.

Summary: In my opinion, @Brian Christensen suggestion is the best trade-off, but be aware of the restarting activity issue.

In the manifest file you add following code:

Not the answer you're looking for? Browse other questions tagged android tablet screen-orientation or ask your own question.

285
Determine if the device is a smartphone or tablet?
20
Activity orientation changes automatically on Android
19
When should the dimens.xml file be used in Android?
4
How to change screen orientation, without creating a new activity on android?
8
Disable landscape orientation for phones but allow for tablets
14
How to toggle orientation lock in android?
4
How to disable landscape on small screens layout
3
Programatically determining whether device is a Phone or Tablet
3
Android : How set force device orientation by device type (tablet, phone)?
8
landscape mode in tablet only
See more linked questions