Is JavaScript an untyped language?

I've found that some people call JavaScript a "dynamically, weakly typed" language, but some even say "untyped"? Which is it really? 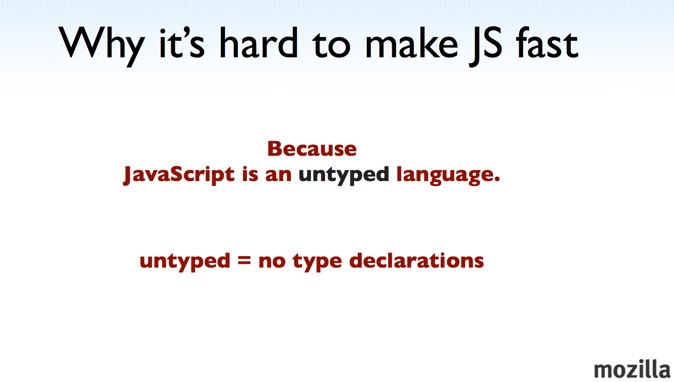 Even Brendan Eich says so. On Twitter, he replied to a thread that linked to this question:

So the problem is that there's a few different definitions of untyped.

One definition has been talked about in one of the above answers - the runtime doesn't tag values and just treats each value as bits. JavaScript does tag values and has different behaviour based on those tags. So JavaScript obviously doesn't fit this category.

The other definition is from Programming Language Theory (the academic thing that Brendan is referring to). In this domain, untyped just means everything belongs to a single type.

Why? Because a language will only generate a program when it can prove that the types align (a.k.a. the Curry-Howard correspondence; types are theorems, programs are proofs). This means in an untyped language:

In contrast to a typed language:

strong/weak can be thought of in relation to how the compiler, if applicable, handles typing.

dynamic/static can be thought of in relation to how the language instructions manipulate types.

Typed means that the language distinguishes between different types such as string, number, boolean, object, array, null, undefined and so on. Also each operation is bound to specific types. So you cannot divide an integer by a string.

Untyped means the operation of dividing integer by string would result in treating the first four bytes of string as integer. This is because Untyped operations take place directly on bits, there are no types to observe. The outcome will be something quite unexpected:

Since JavaScript behaves according to the definition of being Typed, it must be. And therefore it must be Dynamically Typed, and Weakly Typed.

If anybody claims JavaScript is Untyped, it is merely for academic theory, not for practical application.

JavaScript is weakly typed. It is most certainly not "untyped" but its weakly typed nature allows for a lot of flexibility in terms of implicit conversions.

Keep in mind that JavaScript is also dynamically typed. This method of typing allows what is know as "duck typing".

For comparison consider that JavaScript is not strongly typed nor is it statically typed. Sometimes understanding what something isn't can help you see better what it is.

To the author's point JavaScript is also classified as Dynamically typed. Wiki states that Dynamically typed languages are type checked at runtime instead of in a compiler while Weakly Typed refers to the ability to change type on the fly within your code. So yes it is both Dynamically typed AND Weakly typed.

The problem here that is confusing a lot of programmers is that definitions like this are not standardized somewhere. The term untyped programming language is ambiguous. Does that refer to a language that has no data types or a language that is a lambda calculus untyped variant?

In the context of the everyday programmer, not the researcher or theoretical computer scientist, the term untyped is a misnomer because most people aren't doing lambda calculus. Thus the term confuses the masses and seems to declare that JavaScript does not have any data types which is simply not true. Anyone who has ever used typeof knows that JavaScript has its own language data types:

A more accurate designation for JavaScript would be implicitly typed, dynamically typed, or weakly/loosely typed (or some combination thereof), in that JavaScript uses type coercion in some cases which makes the type implicit because you don't have to explicitly specify the type of your variables. It falls under weakly typed because, unlike some languages which distinguish between float and integer etc, it just uses one number type to encompass all numbers, and makes use of the type coercion mentioned previously[Section 9 of ECMAScript Spec], in strong contrast to a strongly-typed language which would have very specific data types (i.e. you would have to specify int or float).

The definitions of statically and dynamically-typed languages are not standardized, however neither was the size of a byte when computers were beginning to evolve. Static and dynamic typing most often refer to the presence of certain language features. One of which is type-checking at runtime, or what is called dynamic type-checking. If you've used JavaScript, you already know that it definitely waits until runtime to check types, which is why you get TypeError exceptions during execution of your code. Example here

I think the top-voted answer is confusing JavaScript functions' polymorphism with functions that will accept literally anything (as with untyped variants of Lambda Calculus) which is an Association Fallacy.

Remember that JavaScript allows you to ask what is the typeof(your_variable), and compare types: 5==="5" returns false. Thus I don't think you can call it untyped.

It is dynamically and (estimated as) weakly typed. You may want to know it uses Duck typing (see andrew's link) and offers OOP though Prototyping instead of classes and inheritance.

While it is typed (you can ask "typeof someVar" and learn its specific type, it's very weak.

you might say that a is a string. However, if you then write:

b is an int equal to 15, so a acted just like an int. Of course, you can then write:

and c will equal "5Hello World", so a is again acting like a string.

I'd argue JavaScript is strongly and dynamically typed.

But that depends on a bunch of terms which seem to to be loosely defined at best, so the above is true only if you accept the definitions below...

JavaScript will not let you corrupt the memory (hence "strong") but does all the checking and type conversions/coercions at run-time (hence "dynamic").

I find it helpful to think of "strong vs weak" as being orthogonal to "static vs dynamic". There are languages that are strong and static (e.g. C# without unsafe context), strong and dynamic (most "scripting" languages seem to fall into that category), weak and static (C/C++).

Not sure what would be weak and dynamic... assembler, perhaps :)

the result is string. why? because the initial typeof results in 'integer' which in itself is a string. I would assume in a strongly typed language this type of changing types would not be a thing. perhaps i am mistaken but that was the first instance where i started to understand how CRAZY JS can be lol

-1
Is it possible to change a variable from String to Number in Javascript?
1
Must you define a data type when declaring a variable in JavaScript?
0
No variable data type in Java Script
178
Does "untyped" also mean "dynamically typed" in the academic CS world?
32
Declaring javascript variables as specific types
4
Property does not exist issue running Angular2 ver.2.0.0-alpha.44
0
Javascript - Which data is stored in "var" and how its content/storage is changed
1
Returning a tuple in Javascript
0
Javascript - charAt is not a function error
2
true/false vs int in JavaScript (unexpected behavior)
See more linked questions