I'm new to Git. I wish to know what are tracked and untracked files? I read "Pro Git", but still couldn't quite understand.

Can someone explain to me the difference between the two by providing an example?

A file is tracked if it is under version control.

As a small example, a C++ project would have

as source files; you'd put these under version control. During build,

are generated; these do not belong under version control, so you do not use git add on them. They remain untracked, because git does not care what happens to them. Until you add them to .gitignore (the .o files are ignored by default), git does not known whether you want to add or ignore them, so it displays them with the git status command until you make a decision.

Whether a file is tracked or not also depends on the version -- suppose you autogenerate worker.cpp and remove it from version control at a later version. The file is now untracked in that version. When you go back to a version where the file was still under version control, git will refuse to overwrite that file during checkout.

The Git Pro book chapter you mention tries to detail the notion of untracked file:

When you checkout a given SHA1, you get a "snapshot" of all versioned files.
Any file not referenced by this snapshot is untracked. It isn't part of the Git tree:
See "git - how to tell if a file is git tracked (by shell exit code)?"

Any file that you want to ignore must be untracked (as explained in this GitHub help page).

Note that git will not ignore a file that was already tracked before a rule was added to the .gitignore file to ignore it.
In such a case the file must be un-tracked, usually with git rm --cached filename 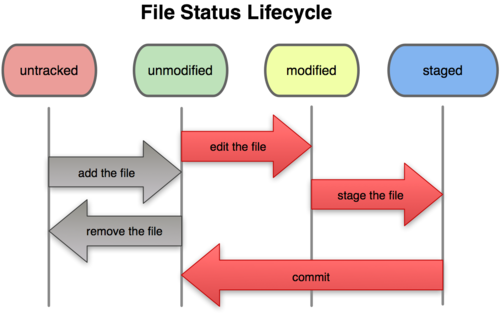 Tracked files are the one handled (version controlled) by Git, that were once added and committed. Untracked files are most of the time files you don't want to be controlled, because for example they are generated by your compiler.

You add untracked files to the .gitignore file, so that Git don't ask you if you want to track them.

From a purely technical perspective: A tracked file is simply a file that exists in the Git index. To say it's a file "under version control" is misleading, because this suggests that it's a file that made it into the repo--and that's not necessary for a file to be tracked.

When you init a new Git repo, the index is empty and all files in your working directory are untracked. A file gets tracked when it's added to the index--at which point a SHA-1 hash is created for it and an object entry is placed into the .Git\Objects folder. From that moment on, Git is able to compare the contents/name of the same file in the working directory in order to track changes, renames, and deletes. As long as the file exists in the index, it is tracked.

Not the answer you're looking for? Browse other questions tagged git git-track git-untracked or ask your own question.

418
How to tell if a file is git tracked (by shell exit code)?
71
How to track but not stage and how to unstage but not untrack?

7721
How do I remove local (untracked) files from the current Git working tree?
13301
What is the difference between 'git pull' and 'git fetch'?
2278
Showing which files have changed between two revisions
24615
How do I undo the most recent local commits in Git?
2328
Make .gitignore ignore everything except a few files
8826
How do I force "git pull" to overwrite local files?
7321
How do I make Git forget about a file that was tracked, but is now in .gitignore?
2446
How do I show the changes which have been staged?
19416
How do I delete a Git branch locally and remotely?
2523
How do I safely merge a Git branch into master?