I want to know the difference between __init__ and __call__ methods.

The first is used to initialise newly created object, and receives arguments used to do that:

Defining a custom __call__() method in the meta-class allows the class's instance to be called as a function, not always modifying the instance itself.

In Python, functions are first-class objects, this means: function references can be passed in inputs to other functions and/or methods, and executed from inside them.

Instances of Classes (aka Objects), can be treated as if they were functions: pass them to other methods/functions and call them. In order to achieve this, the __call__ class function has to be specialized.

In Python, __init__() is properly defined as Class Constructor (as well as __del__() is the Class Destructor). Therefore, there is a net distinction between __init__() and __call__(): the first builds an instance of Class up, the second makes such instance callable as a function would be without impacting the lifecycle of the object itself (i.e. __call__ does not impact the construction/destruction lifecycle) but it can modify its internal state (as shown below).

__call__ makes the instance of a class callable. Why would it be required?

Technically __init__ is called once by __new__ when object is created, so that it can be initialized.

But there are many scenarios where you might want to redefine your object, say you are done with your object, and may find a need for a new object. With __call__ you can redefine the same object as if it were new.

This is just one case, there can be many more.

__init__ would be treated as Constructor where as __call__ methods can be called with objects any number of times. Both __init__ and __call__ functions do take default arguments.

You want the list containing the fibonacci numbers to be initialized only once and after that it should update. Now we can use the __call__ functionality. Read @mudit verma's answer. It's like you want the object to be callable as a function but not re-initialized every time you call it.

If you observe the output __init__ was called only one time that's when the class was instantiated for the first time, later on the object was being called without re-initializing.

__call__ allows to return arbitrary values, while __init__ being an constructor returns the instance of class implicitly. As other answers properly pointed out, __init__ is called just once, while it's possible to call __call__ multiple times, in case the initialized instance is assigned to intermediate variable.

You can also use __call__ method in favor of implementing decorators.

This example taken from Python 3 Patterns, Recipes and Idioms 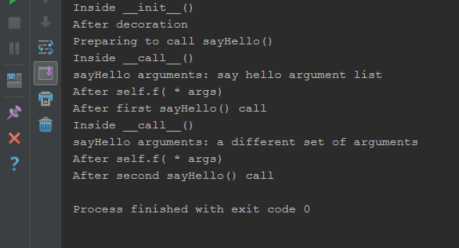 So, __init__ is called when you are creating an instance of any class and initializing the instance variable also.

And __call__ is called when you call the object like any other function.

Short and sweet answers are already provided above. I wanna provide some practical implementation as compared with Java.

Note: scenario 1 and scenario 2 seems same in terms of result output. But in scenario1, we again create another new instance instance1. In scenario2, we simply modify already created instance1. __call__ is beneficial here as the system doesn't need to create new instance.

__init__ is a special method in Python classes, it is the constructor method for a class. It is called whenever an object of the class is constructed or we can say it initialises a new object. Example:

__call__ when implemented in the Class helps us invoke the Class instance as a function call.

Here if we use B(), it runs just fine because it doesn't have an __init__ function here.

We can use call method to use other class methods as static methods.

Not the answer you're looking for? Browse other questions tagged python class oop object callable-object or ask your own question.

0
__call__ behavior
1
__call__ vs. __init__: Who gets the arguments? Who gets called first?
1
Is there a way to call the only important arguments of a sprite class?
134
Existence of mutable named tuple in Python?
8
__init__ or __call__?
4
Python - What does it mean for a Class to be callable?
5
Understanding Self Internally in Python
4
When calling a class like Activation('relu')(X), how does it actually work?
5
Member function decorator and self argument
4
PyTorch: What does @weak_script_method decorator do?
See more linked questions