What is the difference between GDB & LLDB debuggers? I recently upgraded my Xcode version from 4.2 to 4.3 & started getting warning to upgrade my debugger from GDB to LLDB.

LLDB is part of the LLVM suite of tools that Apple is moving to, including Clang. There are tons of improved features, including improved performance. There's a quick intro for GDB users here: http://lldb.llvm.org/tutorial.html

You might want to take a trip over to the forums at developer.apple.com. There's a fair bit of rumbling about issues with LLDB at the moment (in XCode 4.3.1). One nasty issue, which people from Apple have confirmed, is that viewing ivars while stepping may show you the wrong values.

1. By Difference of Definition

First, What is GDB?

"GDB is the standard debugger for the GNU software system"
The GNU Debugger, usually called just GDB and named gdb as an executable file, is the standard debugger for the GNU operating system. However, its use is not strictly limited to the GNU operating system; it is a portable debugger that runs on many Unix-like systems and works for many programming languages, including Ada, C, C++, Objective-C, Free Pascal, Fortran, Java1 and partially others.2

Second, What is LLDB?

"LLDB is a debugger built as a set of reusable components which highly leverage existing libraries in the larger LLVM Project, such as the Clang expression parser and LLVM disassembler.
LLDB is Apple’s “from the ground up” replacement for GDB, developed in close coordination with the LLVM compilers to bring you state-of-the-art debugging with extensive capabilities in flow control and data inspection. Starting with Xcode 5, all new and preexisting development projects are automatically reconfigured to use LLDB. The standard LLDB installation provides you with an extensive set of commands designed to be compatible with familiar GDB commands. In addition to using the standard configuration, you can easily customize LLDB to suit your needs.

(quotation from Apple official site)
/* I tried to find actual / practical datas to prove the statement : LLDB is already much faster than GDB when debugging large programs.) However, I could not find it. if there is someone having this related data, please edit this article. */

2. By Difference of Debugger Command usage

The majority of the commands are the same.
However, lldb and gdb, two different debuggers are developed by different set of developers and thus have a little bit different commands.

This is good link below for comparing difference of these two debugger commands.
let me link the detail below : https://developer.apple.com/library/content/documentation/IDEs/Conceptual/gdb_to_lldb_transition_guide/document/lldb-command-examples.html

This clearly indicates and organizes the difference of commands.

In case the site is not accessible anymore, I summary the major difference of commands below from the linked site. 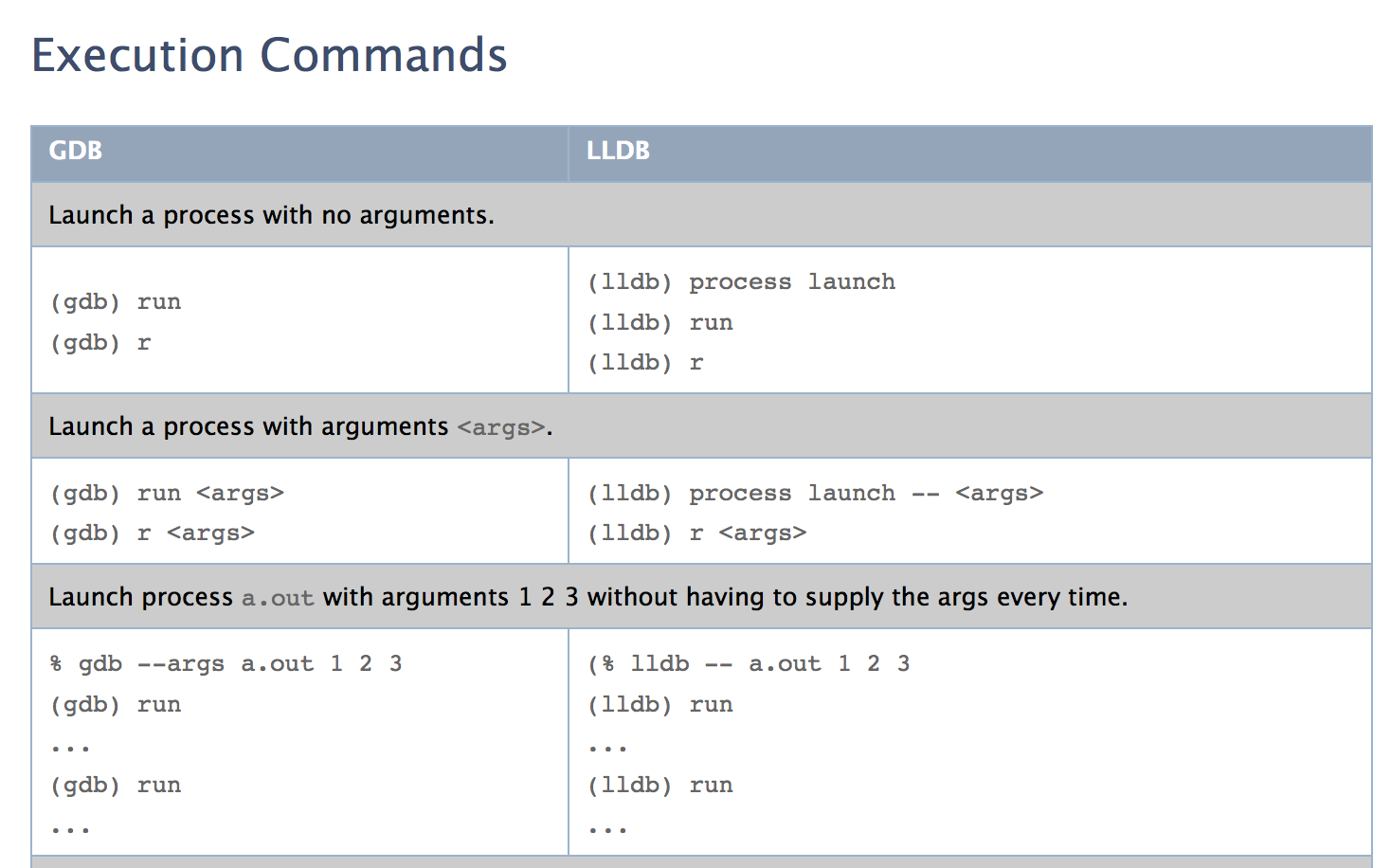 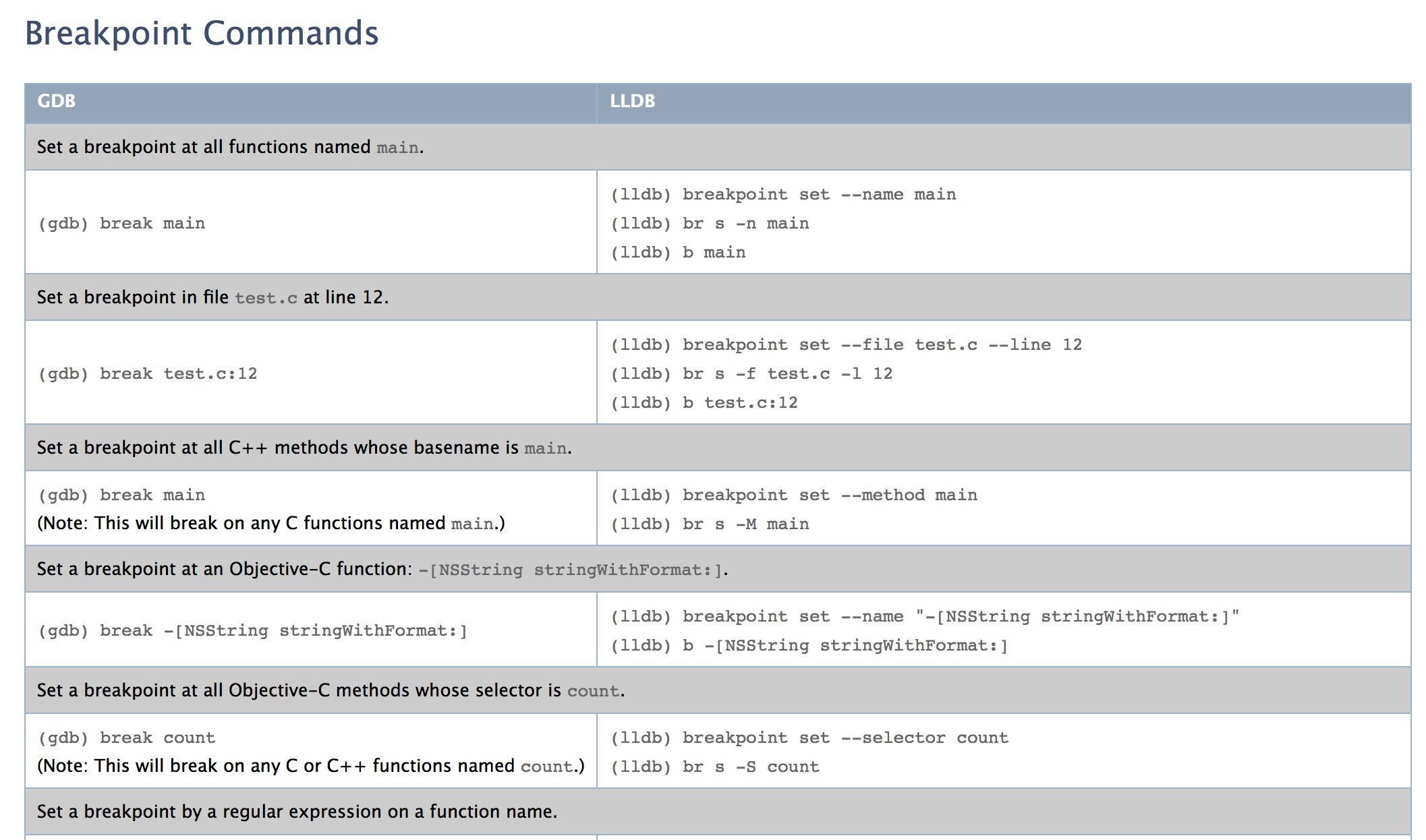 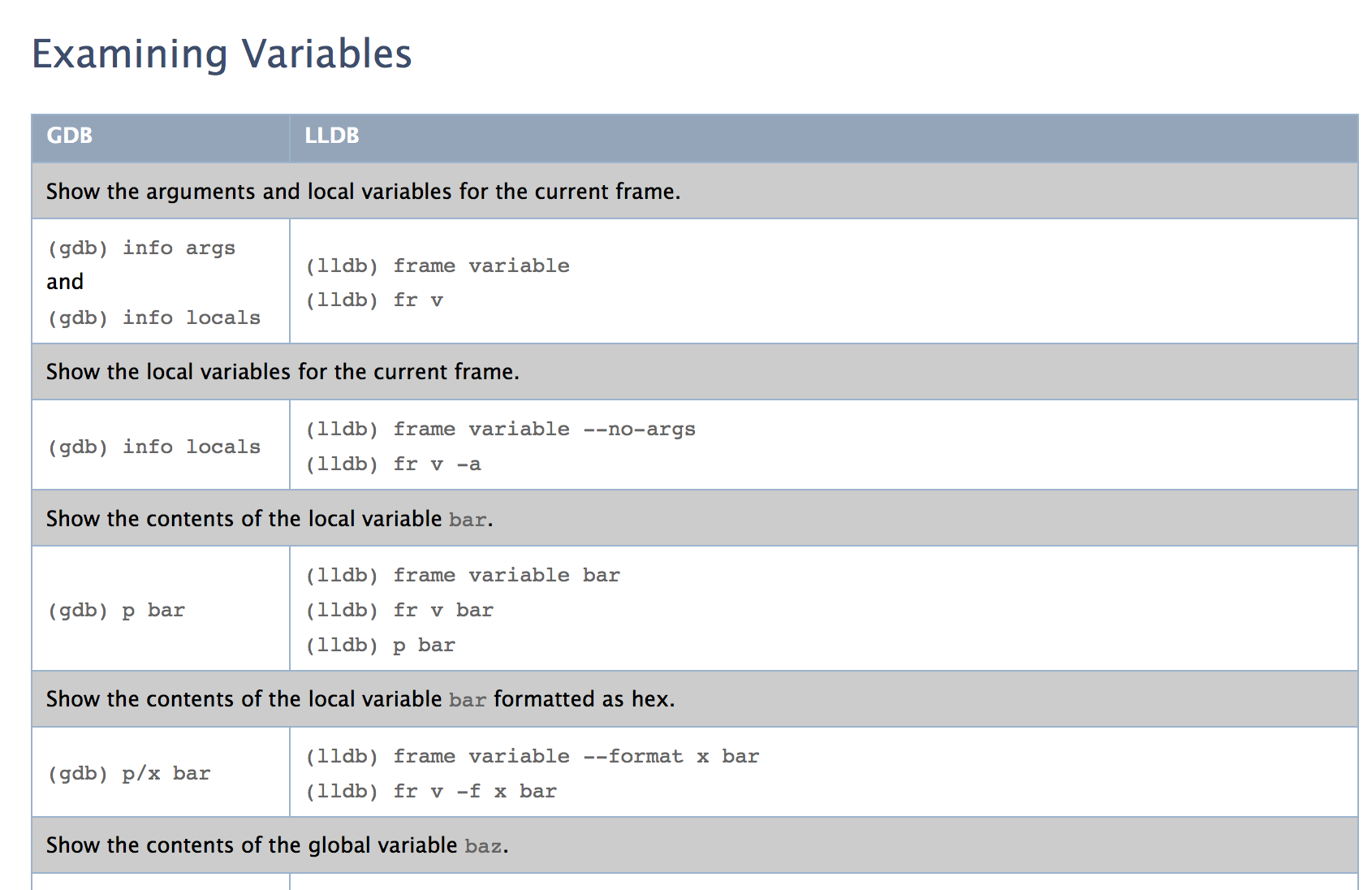 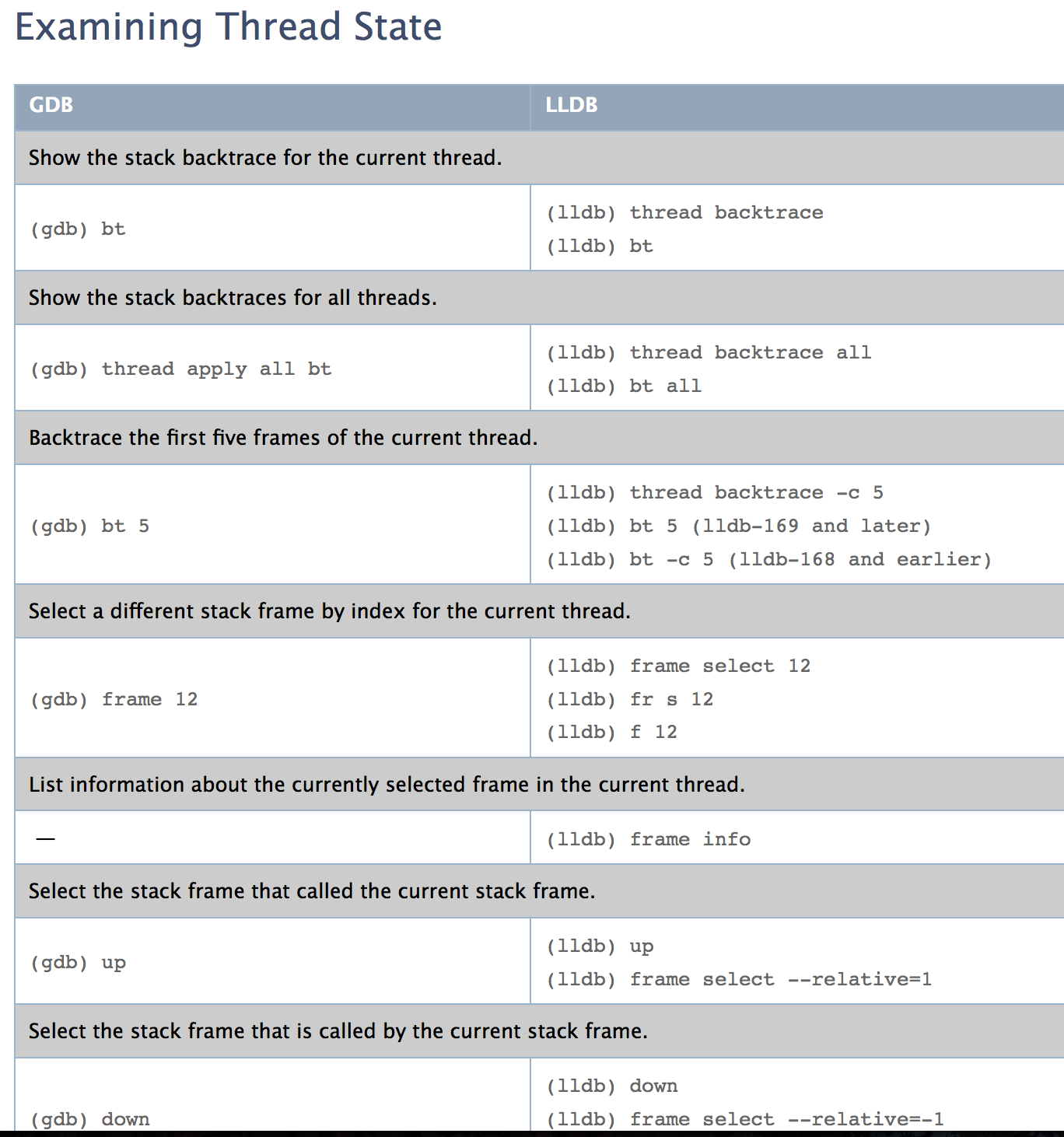 LLDB has been fully integrated from Xcode IDE 5 by default as primary debugger.
From that time, there has been some complaint report about LLDB stability, performance issues and bugs.
However, LLVM with LLDB project has been being incredibly improved and upgraded so far as the one of the core open-source project in the world.
So, I think, at least, LLDB should be used for Apple development environment since LLDB stole the position of GDB and is already primary default debugger at least in Apple world.
(In late September, 2016, Xcode 8 integrating LLVM and LLDB was officially released, meaning quite a lot of time has been passed since LLVM/LLDB is default tool-chain for Xcode.)
But, We all already know GDB has been historically and strongly verified and battle-proven debugger over 30 years, which is awesome.

So, I would say…
I would like to use lldb while using clang, use gdb while using gcc compiler as the good combination or pair because lldb is based on llvm, whereas gdb is a GNU debugger.

I wish it could be helpful for you.

Not the answer you're looking for? Browse other questions tagged xcode debugging cocoa-touch gdb lldb or ask your own question.

12
Difference between LLDB and GDB debuggers
10
C++: Strange behavior: Return value changes on the return statement
5
Can I disable “Upgrade debugger from GDB to LLDB” warning in XCode 4.3.2?
2
Float variables assigned value from line above

652
Version vs build in Xcode
21
What are the advantages of LLDB over GDB in iOS development?
11
NSLog no output in LLDB. Works in GDB
139
Is it possible to get the iOS 5.1 SDK for Xcode 4.2 on Snow Leopard?
1
what to use, GDB or LLDB debuggers for xcode
4
Unable to set a watchpoint in either gdb or lldb
5
Can I disable “Upgrade debugger from GDB to LLDB” warning in XCode 4.3.2?
1091
Reference - What does this error mean in PHP?
2
How do I switch from lldb to gdb debugger types?